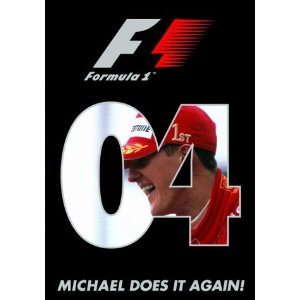 It’s taken a while for FOCA to get their act together with F1 review DVDs – too long, really – but the 2004 DVD delivers the goods.

The picture quality is as good as we’re going to get until high-definition becomes the norm, and the sound quality is similarly high.

A shame, then, that 2004 was such a dismal season. Some people blamed Ferrari’s rivals for not doing a good enough job, others blamed the lingering effects of the FIA’s banning of Michelin’s tyres in late 2003, and still others felt the gimmick value of the previous season’s rules had worn off.

Whatever, seeing Michael Schumacher romp off to 12 wins in the first 13 races is no less repetitive in retrospect than it was the first time.

A couple of decent races towards the end liven thing up – Belgium and Brazil, notably. But otherwise the racing action is poor and the commentary is yet again simply not up to scratch.

It’s also time some thought was given to enlivening the packaging with extra material – in the box and on the disk.

Best bit: Crash fans have Jarno Trulli’s stellar effort at Silverstone, but racing purists will appreciate the tense duel between Schumacher and Kimi Raikkonen at Spa.