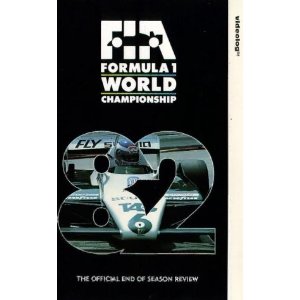 The 1982 season was probably the most important of the eighties – but for all the wrong reasons.

While the sport tore itself apart politically (the year began with a driver’s strike) the excessively fast ground effect cars were killing people – namely the great Gilles Villeneuve and Italian novice Riccardo Paletti.

Pre-dating modern sensitivities, both accidents are shown on the tape, which makes for harrowing viewing – particularly the conflagration which engulfs Pironi’s car.

It’s difficult, therefore, to talk about this tape in terms of its entertainment value. Only one year earlier Simon Taylor in the 1981 video applauds the “high safety standards” in Formula One after John Watson’s crash at Monza.

What followed in 1982 was a sobering reminder that our sport never can and never will be completely safe.

It gets such a high rating because the occasionally bleak material is so sensitively handled – a minor miracle, given the generally poor 1981 and 1983 reviews. It is better for these videos to record what actually happened and document them sensibly and unflinchingly.

Though recent editions that have had to deal with similar material (1994) have not done so insensitively, they fall short as adequate accounts of the history of Formula 1.

Best bit: Eliseo Salazar knocks Nelson Piquet out of the lead at Hockenheim – so Piquet responds with a few improvised kung-fu kicks.