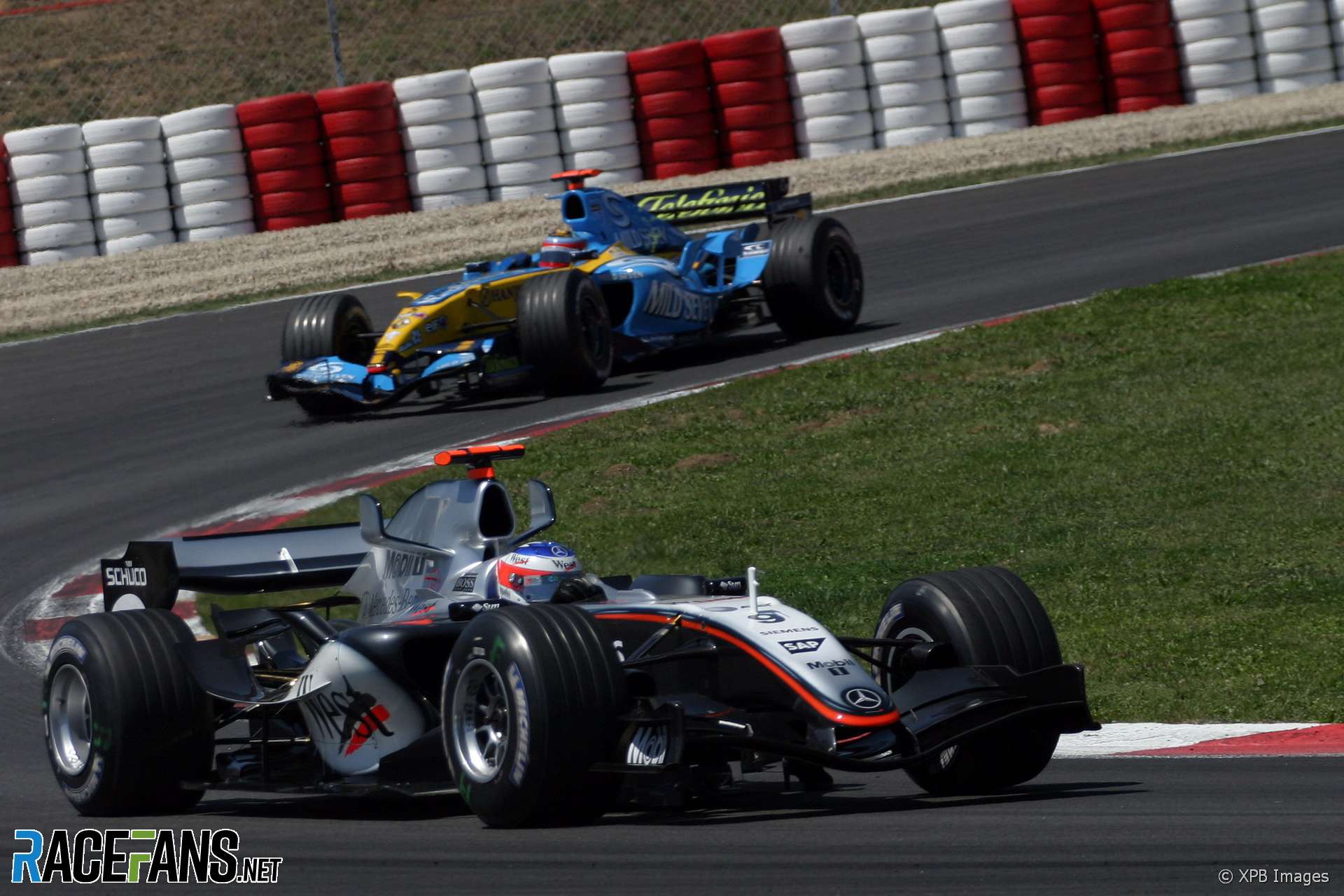 Kimi Raikkonen delivered a performance worthy of his McLaren predecessor and compatriot Mika Hakkinen as he left the field standing in Spain. Michael Schumacher failed to score again and lost further vital ground on Fernando Alonso in the championship.

The talk of the paddock after Imola – BAR’s fuel tanks and ITV’s adverts aside – was all about the pace of Schumacher’s Ferrari as he reeled in Alonso at over two seconds per lap in the closing stages.

But it wasn’t Schumacher who spoiled Alonso’s home party at the Circuit de Catalunya. Instead it was Raikkonen, who demonstrated even greater pace than he had in Imola and – this time – his car held to the flag.

Raikkonen took his second consecutive pole of 2005 and delivered further proof that McLaren have got on top of their one-lap pace problems that compromised their start to the season.

Despite running early due to his San Marino retirement, Raikkonen was just 0.024s shy of Jarno Trulli’s provisional pole time (and could have been ahead had he not putting a wheel on the dirt at turn two) and converted that into outright pole with a stellar lap on Sunday morning.

Mark Webber edged Alonso off the front row to take second, but ran less fuel in the Williams and planned to make three stops in the race. Trulli ran the same amount of fuel as Raikkonen but dropped to fifth on the final grid, behind team mate Ralf Schumacher for the first time this year. Ralf’s brother Michael took eighth in a fuel-heavy Ferrari, one spot behind McLaren returnee Juan Pablo Montoya.

Prior to the race Alonso warned Webber that Renault had found a step forward in their already renowned traction control system, and sure enough the Spaniard left the Australian behind as the red lights went out.

The traction control on the Minardi PS05s, however, is clearly in need of further work, as both cars ground to halt immediately after leaving their marks. This forced Nick Heidfeld and Rubens Barrichello, both having started from the back after having engines replaced, into desperate avoiding action and nearly caused a serious accident. Montoya also got off to a flier but was eased onto the grass by Trulli, and fell back behind Schumacher.

However the stationary Minardis forced a safety car intervention and the pack circulated line astern for two laps as the cars were dragged into the pits. The team eventually got Patrick Friesacher’s machine going, but he lasted only until lap 11 when he spun the new car into the gravel at turn three.

As usual, Montoya capitalised on the restart, exploiting all his rolling-start savvy from his Champ Car years. He picked off Schumacher into turn one, and left him behind at such a rate that Schumacher couldn’t even capitalise when Montoya had a rapid 360 degree spin at Campsa on lap eight.

Out front, Raikkonen was scorching away at a shocking pace, breaking through the 1m 17s barrier as early as lap nine. By lap 11 the gap to Alonso was 7.7s, then 13.5 by lap 16 and 26s by lap 24, when he made his first pit stop. Webber had stopped six laps earlier from fourth behind Schumacher, and the team switched from the three stop gamble onto a conventional two as their thoughts turned from grabbing a podium to salvaging a few points.

Raikkonen’s lead was enough for him to pit and resume without losing the lead to Alonso, although he was briefly panicked as his Mercedes engine gave a puff of blue oil smoke as he pulled out of his pit box. Unlike in Imola, though, this did not prove terminal.

Alonso had been visibly struggling in the opening stint, falling back towards Ralf Schumacher and, after Webber’s stop, holding Ralf up enough for Trulli to close in. Schumacher made the first stop of the three and paid the price, for under the 2005 rules where drivers cannot change tyres there is far less to be gained by ducking into the pits when you are trapped behind a slightly slower car. Thus Trulli passed Schumacher after their stops, despite trailing flames out from behind his Toyota as he left.

The last driver to make his first stop, as in Imola, was Michael Schumacher, and he briefly threatened to put on another shocking turn of speed to reel the leaders in. He had dropped back to 41s adrift of Raikkonen, but carved out to new fastest laps on his way into the pits, including a dramatic 1m 15.6s.

Aided by the first two laps of fuel economy behind the safety car, Schumacher’s first stop came at the half way mark, but he remained on a two-stop strategy. He resumed the race and swiftly made his way up to third, promoted by Giancarlo Fisichella’s extra stop for a new front wing and more bad luck for Montoya as the refuelling equipment failed on his first visit to the pits.

This left the front three basically stable with Raikkonen well clear of Alonso, who had adjusted his rear tyre pressures in his first stop to ease a blistering problem, and Alonso 11s ahead of Schumacher.

Suddenly, on lap 45, Schumacher appeared back in the pits with a burst left rear tyre. Whether this was a consequence of excessive stress in the fast laps in the run up to his pit stop, or a simple puncture, was not clear, but the fact that two laps later a second puncture put him out of the race completely suggests the former is true. Regardless, Schumacher now trails Alonso by 34 points.

In the closing stages there were just two significant battles. Once again the Toyotas had caught Alonso prior to the final round of stops, and once again Ralf pitted first and lost out to Trulli. This proved crucial, as Schumacher was left to pressure Trulli to the flag but, despite a couple of tentative moves, could not find a way past and Trulli took the final podium place.

Further back a recovering Fisichella caught fifth-placed Webber and pulled off a rare pass (for the Catalunya circuit) down the main straight. Webber made a brief feint towards Fisichella to discourage him, but mercifully there was no repeat of their Malaysia coming together. Fisichella then went on to edge out Schumacher for the fastest lap of the race on the last lap of the race, at 1m 15.641 (by 0.007s), and take his first points since his Australian win.

The remaining points were taken by Juan Pablo Montoya, cursing his luck and his mistake, and David Coulthard, who took a fourth points finish in five starts for Red Bull Racing. Vitantonio Liuzzi, who claimed a point in San Marino despite finishing 11th on the road, had spun off on only lap nine. Barrichello and Heidfeld had fairly anonymous and uneventful runs from the back of the field to ninth and tenth. Eleventh for Felipe Massa was no reward for Sauber, and Jacques Villeneuve retired. The Jordans were a full three laps adrift.

The Spanish Grand Prix result means that we have at the very least a potential three-way battle for the driver’s championship title: Alonso, Raikkonen and the never-to-be-discounted Schumacher on 44, 17 and 10 respectively. And this is to say nothing of Jarno Trulli, with three podiums and 26 points, who could yet threaten for wins if Toyota can unlock more speed from their TF105.

Crucially, the finishing positions at Catalunya determine the qualifying order for Monaco, where a good position on the starting grid is vital. This is excellent news for McLaren, Renault and Toyota, and a serious concern for Schumacher at a circuit where he has not won since 2001. McLaren have finally delivered on their pre-season form, but they will need to keep up the pressure if they are to challenge for championship honours this year.