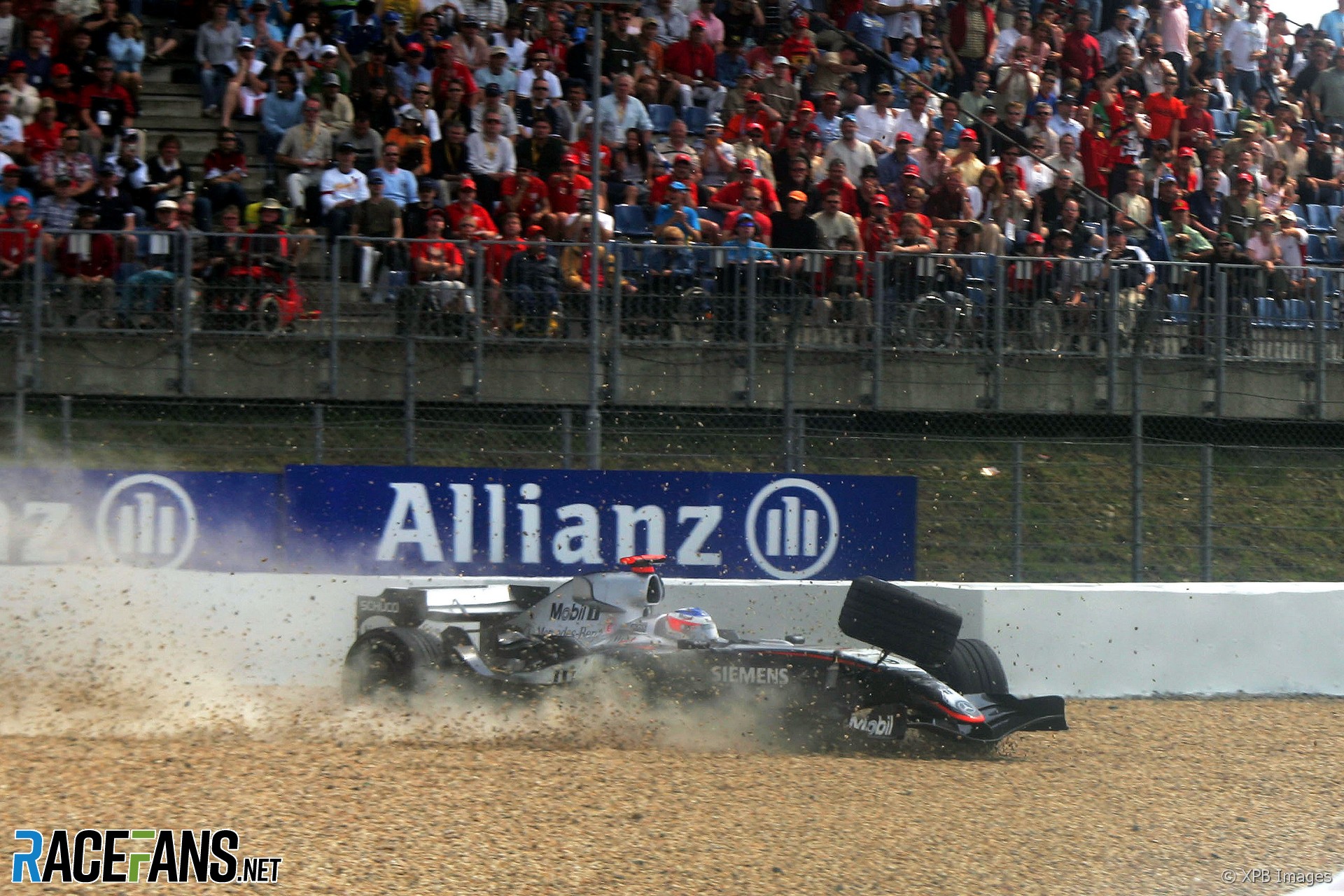 Fernando Alonso kept Kimi Raikkonen under pressure throughout the European Grand Prix and capitalised at the last possible moment, when Raikkonen’s suspension shattered and pitched the Finn into the barriers. Alonso now has a 32-point advantage in the title race.

From the outset the European Grand Prix looked like it was going to be McLaren-Mercedes benefit. Of the four practice sessions prior to qualifying, three were headed by at least one of the silver cars.

In qualifying, now mercifully cut back to a single session, Alonso could only manage sixth in his Renault. Both Williams were ahead of him, but they were widely expected to be running less fuel, as usual. But Juan Pablo Montoya, fifth, and Jarno Trulli, fourth, would almost certainly be running longer and heavier, and threatened to delay Alonso.

At the very front Nick Heidfeld, riding sky-high on confidence after a best-ever finish of second in Monaco, took pole in a relatively light Williams. Raikkonen, crucially, split Heidfeld from team mate Mark Webber and gave himself a realistic shot of leading out of the first corner, given that the Williams had been sluggish of the line in previous races.

When the time came that was exactly what happened – but the rest of the start was anything but predictable.

Montoya made a very quick getaway and passed Webber, but the Australian ran wide and thumped into the McLaren. Alonso slowed to avoid the melee and was hit by Ralf Schumacher, but his deft reactions kept the Renault from spinning and he resumed in fifth behind Raikkonen, Heidfeld, Trulli and David Coulthard’s Red Bull, sensationally up from 12th!

Montoya was able to resume, albeit down in 13th, one place ahead of Michael Schumacher, who had started only tenth. Webber was out on the spot and Ralf Schumacher and Takuma Sato both pitted for repairs.

Trulli, too, was out of luck as his mechanics had spent too long on the grid prior to the formation lap, and he received a drive-through penalty. After the race he claimed he could have won without the penalty.

Out in front Raikkonen was not able to pull away from Heidfeld in the same way in which he had disappeared off at the front in Monaco and Spain. Part of the explanation for that became clear on lap 12 when Heidfeld made his first of what would turn out to be three scheduled stops. This was not even the first stop of the day – Rubens Barrichello had come in on the previous lap having picked off Jenson Button and Vitantonio Liuzzi, in his extremely light Ferrari.

On their return to racing BAR had run Button’s car very heavy with fuel to suffer as little disadvantage as possible owing to his early running position in qualifying. He was easy prey for Montoya and Schumacher, and on lap 14 had Giancarlo Fisichella filling his mirrors. The Italian had filled with fuel after being forced to start from the back as a result of stalling at the first start.

Raikkonen’s first pit stop came on lap 17, surprising those who expected the McLaren to run far longer, and delighting Renault as Alonso was fuelled for another five laps.

Raikkonen’s stop promoted Coulthard into the lead for a single lap before his stop. But Coulthard’s hopes for a podium finished were dashed as he broke the pit lane speed limit and was promptly called back in for a drive-through penalty.

By lap 22, Alonso had made his first stop and resumed in third, ahead of Barrichello and behind Heidfeld and Raikkonen. Heidfeld and Barrichello were both approaching their second stops and reeling in the drivers in front of them. Heidfeld had just cut Raikkonen’s lead from 4s to 1.8s when, on lap 30, Raikkonen ran too deep into the Ford Kurve, bounced over the grass and rejoined. But he was too late to stop Heidfeld briefly stealing the lead – albeit only for a single lap as he was heading in for his pit stop.

Four laps later Raikkonen made his second unforced error of the afternoon, locking his right-front wheel solid as he tried to lap Jacques Villeneuve at turn one. Smoke billowed from beneath the wheel as he drifted past the apex of the corner. This error would have serious consequences later on. Tyre degradation was beginning to take its toll on several drivers as Ralf Schumacher capped a dismal race by spinning into the gravel at the Ford Kurve and out of the race.

Meanwhile the pit stops had rearranged the running order in the middle of the field. Liuzzi had dropped back from his early high of seventh, losing out to Michael Schumacher on the track and to Montoya in the pits. Schumacher and Montoya then moved up behind Felipe Massa’s sixth-placed Sauber.

Montoya had a brief look at Schumacher around the outside of turn one on lap 39, but found the door firmly shut, and then dropped back. Fisichella had now been stuck behind Button’s BAR for 25 laps.

Raikkonen made his last stop on lap 44, the damage to his right front tyre and his broken right barge board clear for all to see. Alonso, sensing that he might yet snatch a win from the stricken McLaren, began to push, but he too ran off the circuit at the Dunlop Kurve on lap 45, losing around seven seconds. He came into the pits the next time round. So too did Michael Schumacher, who emerged ahead of Massa.

The remaining drivers finished their last pit stops and the race settled down into an end game. Raikkonen, struggling with massive vibrations from his front right tyre, was unable to lap consistently and Alonso began to take chunks of up to 1.5s per lap out of him.

More and more drivers were struggling for grip. Liuzzi ran wide at the Coca-Cola Kurve, Massa plunged off the circuit at the Ford Kurve, and even Michael Schumacher took a dusty trip through the gravel on the exit of turn eleven. Massa then suffered a failure on his front left tyre which de-laminated and ripped the front left end plate from his car, robbing him of downforce and forcing him to pit.

The battle for the lead was becoming intense. Raikkonen might legitimately have had his damaged tyre changed but it would have lost him the race win if he had. So he pressed on, and his lead dropped from 4.9s on lap 53 to 4.0s on 55, 2.7s on 57 and then, with one lap left, just over one second.

And then it happened. While braking for the tight, slow first turn the McLaren’s suspension twisted and shattered under the stresses of the fiercely vibrating tyre, pitching Raikkonen off the circuit, and barely missing Button’s BAR. Unhurt, Raikkonen clambered out as first Alonso, then Heidfeld, Barrichello, Coulthard, Schumacher, Fisichella, Montoya and Trulli went by. He had led 48 of the 59 laps, yet scored not a single point.

Alonso cruised around the last lap and saluted the crowd with four fingers for four victories – and, crucially, ten points further ahead of Raikkonen in the championship. But, there are 12 rounds still to be run and more races still to be won until the title is his.