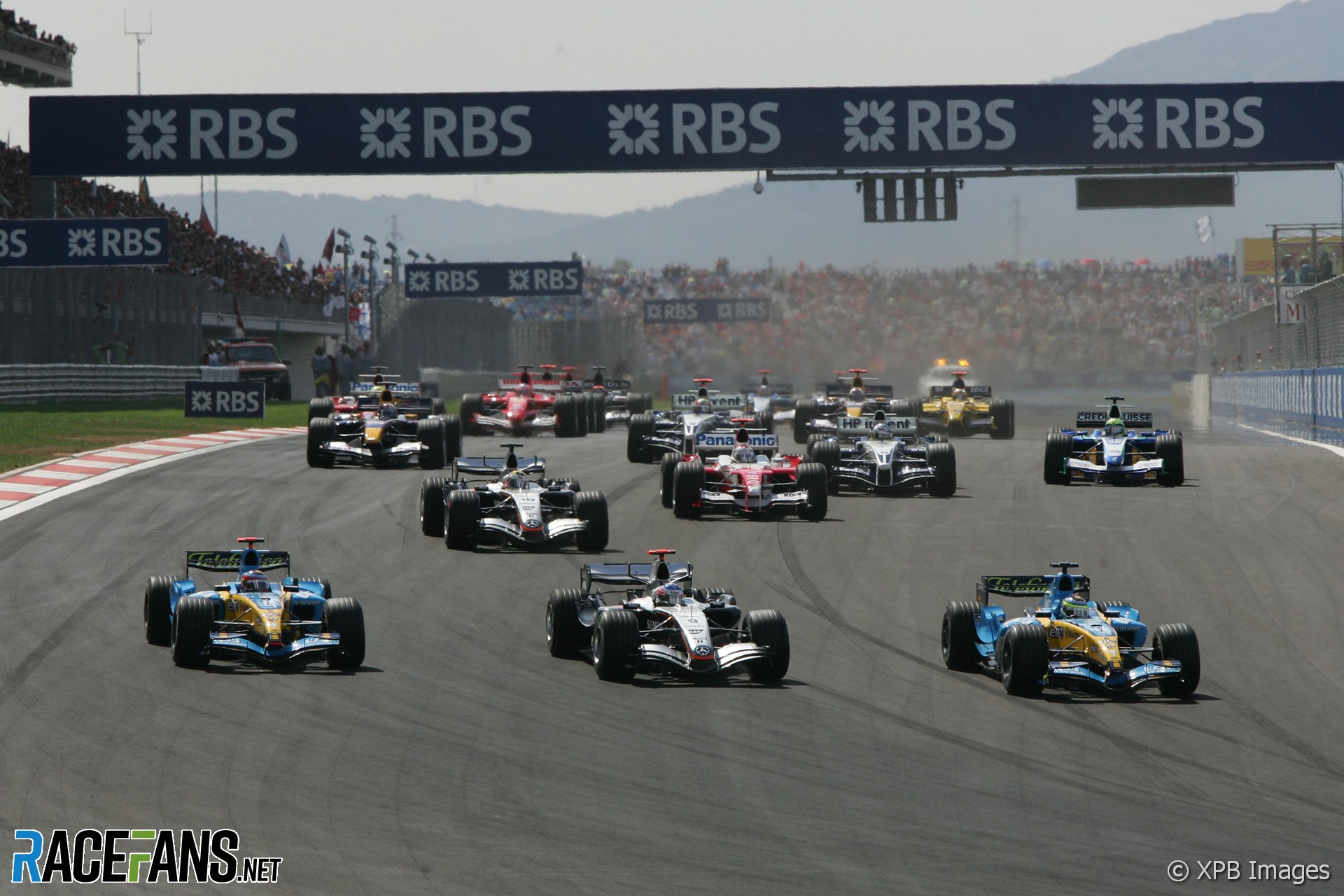 Kimi Raikkonen’s fifth Grand Prix win of 2005 was as emphatic as he could have hoped for. But he only drew two points closer to Fernando Alonso in the championship battle, after a late altercation between Juan Pablo Montoya and Tiago Monteiro.

The inaugural Turkish Grand Prix at the Istanbul Speed Park was every bit the success the organisers could have hoped for. The Hermann Tilke-designed track, a more accomplished configuration than his other efforts, offered enough of a challenge in qualifying to force mistakes from several drivers and mix up the grid order a little. Then, in the race, it provided all the necessary facilities for drivers to overtake one another.

Saturday’s victims included Jacques Villeneuve (spun at turn eight, posted no time), Takuma Sato (spun at turn eight), Jenson Button (turn eight again), Ralf Schumacher (off at turn nine) and brother Michael (ditto, but set no time.) This left a McLaren-Renault monopoly of the front two rows, with Raikkonen on pole ahead of Giancarlo Fisichella, and Montoya an impressive fourth having run early in qualifying by dint of his Hungary retirement.

The opening lap was lively. Fisichella left Raikkonen for dead at the start, who only just kept Alonso at arm’s length. Meanwhile Felipe Massa underlined the negative reputation that has caused many people to question his promotion to Ferrari by hammering into Nick Heidfeld at the first turn.

Fisichella’s period in the lead was brief, as he ran wide on the exit of turn nine and Raikkonen poked through, deftly keeping Alonso back in the meantime. With Montoya all over the back of the championship leader Renault moved quickly to swap their drivers on-track while creatively avoiding allegations of team orders (which they blatantly were).

It seemed as if the opening stint had not even settled down when the Renaults darted in astonishingly early on laps 12 and 13 (Alonso then Fisichella) for fuel. With the McLarens set to run at least nine laps further this was a telling indication of the performance deficit the French cars are currently up against. A refuelling problem for Fisichella did nothing to help matters.

Meanwhile Jenson Button had started very strongly from his compromised grid position and was picking off the slower cars – including both Ferraris, floundering on their older-specification Bridgestone which, though slow, could be relied upon to go the distance.

The same could not be said of Schumacher, who tangled with a lapped Mark Webber on lap 13 in a completely unnecessary collision about which Webber was justifiably aggrieved. In his defence, Schumacher claimed Webber should not have bothered trying to un-lap himself as he would not have made back the deficit anyway.

Webber, like team mate Nick Heidfeld, would retire after a series of right rear tyre failures. There was some dispute over whether Michelin had warned teams of running too heavily over the turn 13 kerbing – no other cars suffered the same failure. Along with Massa’s Sauber, theirs were the only cars not running at the end.

Like Renault, McLaren’s refuelling stops were less than trouble-free. Montoya pitted on lap 21 and left as the lollipop was being raised – fractionally before the refuelling hose with withdrawn, scattering his team everywhere. Fortunately he was able to resume with damage to car or crew, and Raikkonen’s stop was glitch-free.

Button continued to show tremendous pace in the BAR, jumping Jarno Trulli via the pit stops and passing Alonso on the track after the latter was baulked by Tiago Monteiro. He finished ‘best of the rest’ behind the McLarens and Renaults, but surely rued that qualifying error.

Monteiro endeared himself even less to Montoya, whom he thumped into with three laps remaining, damaging the MP4-20’s diffuser. Montoya then ran wide at turn eight, handing second place to Alonso.

Thus McLaren were denied their first one-two finish of 2005 and Raikkonen’s assault on Alonso’s title lead took just two points from it instead of four. Raikkonen will likely be frustrated that such a triumphant win has yielded him so little in the championship.