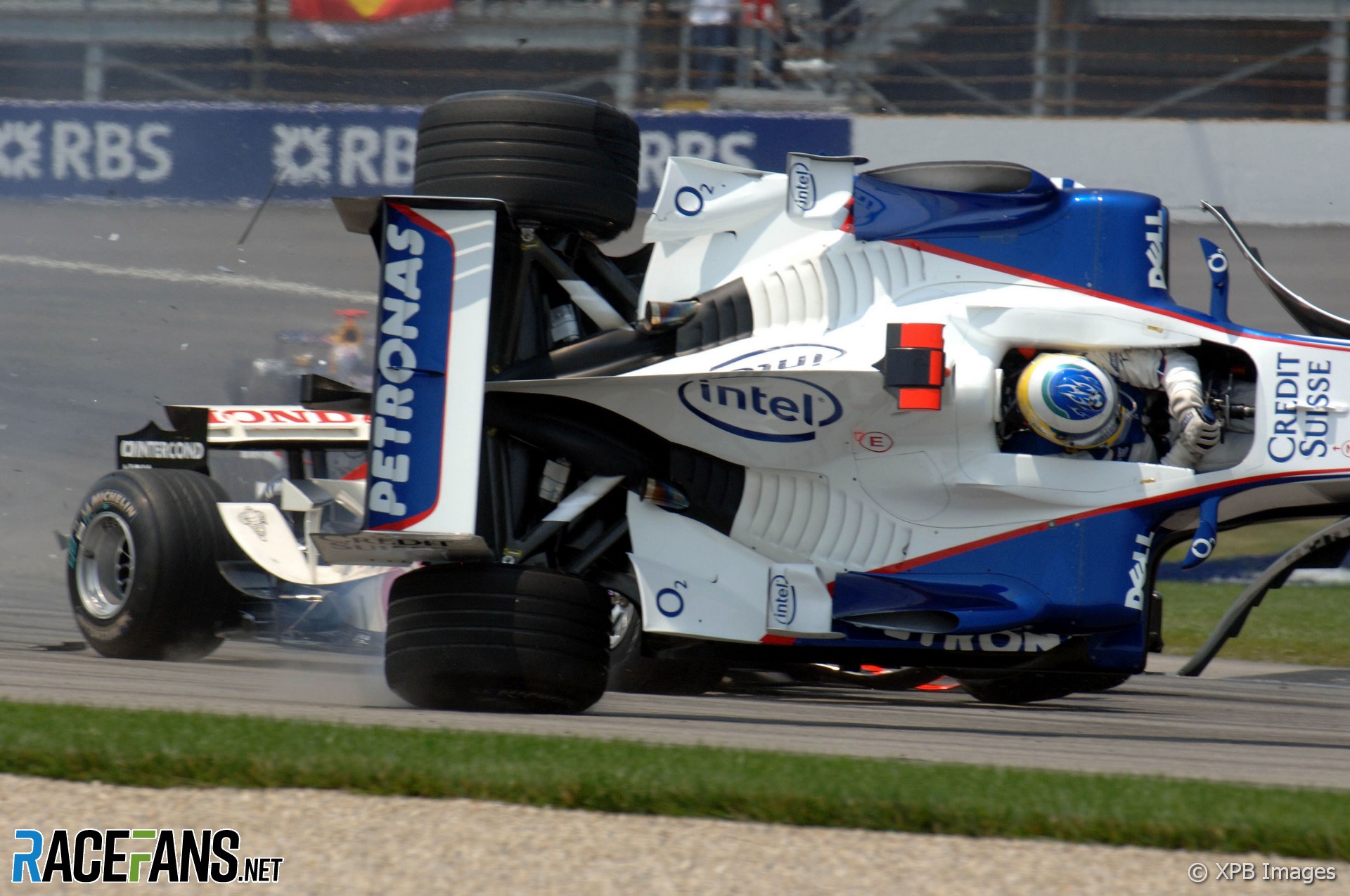 Michael Schumacher scored his first win for almost two months in the United States Grand Prix. But the rapid pace of the Toyotas suggested Ferrari’s speed was more to do with the Bridgestone tyres than a step forward from the Scuderia.

Schumacher’s championship cause was aided by an off-colour performance from Fernando Alonso, who was thoroughly beaten by team mate Giancarlo Fisichella.

The suspicion that Michelin had brought conservative tyres to the United States Grand Prix was confirmed on Saturday when Ferrari annexed the front row of the grid with obvious ease. Schumacher’s pole time of 1’10.832s was 1.088s quicker than the next non-Ferrari.

That was Fisichella, third, ahead of Rubens Barrichello and Alonso. But at the start of the race it was the drivers at the middle of the grid who would command the most attention.

This led to an inevitable safety car period but it was Felipe Massa, not Schumacher, who lined up first. Massa had led Schumacher towards the first corner and with the Renaults snapping at their heels there was no room for a quick switch.

Indeed Alonso, up from fifth, was side-by-side with Schumacher going into turn two but was squeezed out. Fisichella dropped to fourth ahead of Barrichello, Jacques Villeneuve, Ralf Schumacher and Nico Rosberg – the Williams-Cosworth driver up from 22nd to 8th!

When the race restarted Ferrari was keen to preserve their advantage. So Schumacher let Massa go and used his straight-line speed advantage to keep Alonso back.

But the Spaniard wasn’t capable of threatening the Ferraris – he had his hands full keeping Fisichella back. Massa and Schumacher eased away with little difficulty.

The restart hadn’t been so smooth for everyone. Takuma Sato threw his Super Aguri at Tiago Monteiro and took the Midland driver clean out. Sato stopped at turn one and Monteiro called it a day after unwisely dropping debris around the circuit.

They joined the seven retirees from the first lap, plus Jenson Button who had pitted for a new front wing under the safety car, only for his engine to let go.

Even though the field had now been whittled down to a dozen runners, there was still racing going on. Mainly around Jarno Trulli, who had started from the pit lane. He slipstreamed past David Coulthard on lap seven and nipped past Rosberg from eighth on lap 14.

On the same lap Fisichella finally got a run at Alonso and the championship leader, perhaps hoping that his team mate could worry the Ferraris, let him go. Fisichella now began lapping in the high 13s, matching the red cars but not catching them. Alonso floundered in the mid-14s.

Villeneuve looked set for a strong points finish after qualifying an excellent sixth. But his luck deserted him once again and he retired from seventh on lap 23.

Button had lamented his misfortune at retiring because he said he was fuelled to go long into the race. But team mate Barrichello was the first driver to stop on 24 in what would be another quiet race for the Brazilian.

The leaders began their stops five laps later – Schumacher and Fisichella first, then Massa on the next lap. To no-one’s surprise, Massa came out behind Schumacher despite having taken on less fuel. His in-lap was two seconds slower than Schumacher’s – not the sort of time difference you would expect in a situation where team orders weren’t being used.

Regardless, Alonso’s lack of speed was revealed to be entirely genuine and not the result of a heavy fuel load – he stayed out just one lap longer than Massa.

Schumacher now led from Massa with Trulli third, not having stopped. Fisichella was fourth and Alonso fifth. The race began to settle with none of the leaders looking likely to threaten each other.

Trulli came decisively into consideration for a major points finish when he pitted on lap 39 – clearly able to make it to the end of the race with only one stop for fuel.

But the Toyota’s speed revealed just how much quicker the Bridgestones were than the Michelins. The Ferraris were lapping well off their practice pace and their maximum speeds revealed they were preserving their engines.

Coulthard was also one-stopping and after his sole visit to the pits on lap 49 he got back out in eighth ahead of Rosberg and Vitantonio Liuzzi. Seven laps later Liuzzi used his excellent apex speed at the crucial turn eleven to get on the back of Rosberg and slip past the Williams into the first corner.

The final round of pit stops for the lead drivers did nothing to change the order but revealed the severity of Alonso’s dilemma. He resumed from his stop in sixth with both Toyotas between himself and Fisichella.

Alonso got some small relief on lap 63 when Toyota unreliability struck. Unusually in this season it did not claim Trulli, but Ralf, who limped into the pits and retirement.

Schumacher ran to the flag without trouble with Massa dropping ever further back in second, which was still a career best. Fisichella’s third was not his best result of the year, but perhaps his best drive, certainly compared to his team mate.

Trulli’s fourth was only his second points finish of the year – who knows how much better he might have done had his qualifying been untroubled? Barrichello was an anonymous sixth and Coulthard took another useful pair of points for seventh. It was good news for Scuderia Toro Rosso who finally took their first point with Liuzzi’s well-earned eighth place finish.

But it was not a thrilling United States Grand Prix, despite the drama of the first lap. The identity of the winner never seemed in doubt, even when Massa led early on.

Hopefully with the news that the teams appear to have stopped squabbling over engine formulae they can now concentrate their attention on improving the racing.