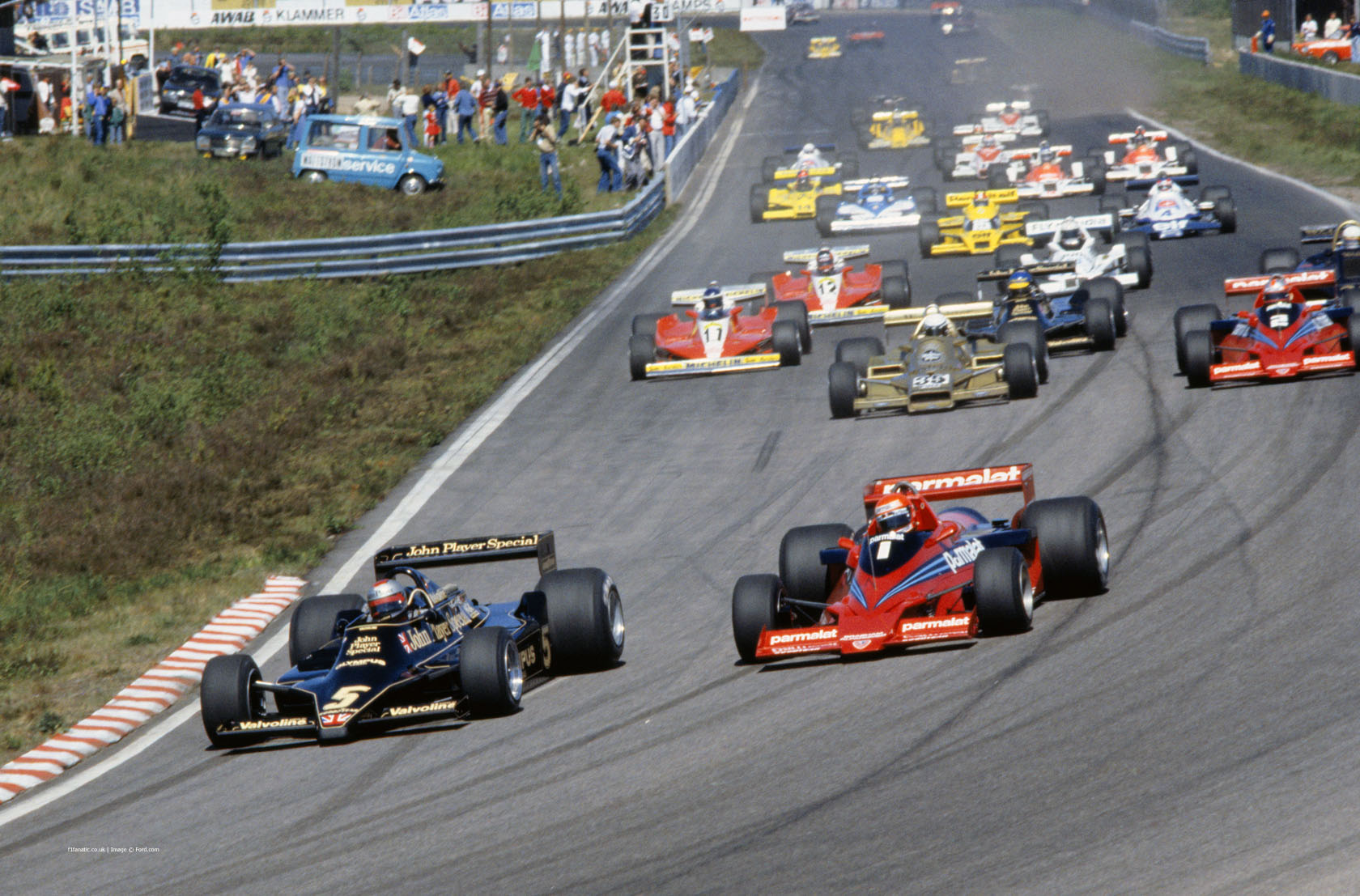 The 1970s was the decade of outrageous innovation that produced some of the most unusual cars ever to grace a racing circuit.

Many were hideous failures that disappeared into obscurity. But Brabham’s ‘Fan Car’ did somewhat better, achieving a 100% victory rate.

Which is to say it won one race, and then it was banned…

If one man could hold a candle to Colin Chapman’s unorthodox design genius it was Gordon Murray, who in 1978 was the designer for Bernie Ecclestone’s Brabham team.

In 1978 Chapman’s Lotus 79 revolutionised the sport by introducing ‘ground effect’ aerodynamics. Skirts mounted down the sides of the car touching the ground allowed it to create low-pressure area at speed, sucking the car onto the track.

Ground effects pushed cornering speeds through the roof, slashed lap times, and sent every other designer scurrying back to their drawing boards to rush off cheap clones.

But Murray found it wasn’t possible to recreate with Brabham’s Alfa Romeo flat-12 engine, which was too wide.

The engine also presented considerable cooling demands which Murray attempted to solve using a revolutionary surface-cooling system instead of radiators which was refusing to come right.

Murray’s combined solution to the two problems was to install a fan at the back of the car both to cool the engine and to suck air from beneath the car, sucking it to the ground.

For the purposes of the regulations the fan’s primary purpose was cooling – because the rules banned components whose primary function was aerodynamic from moving (to prevent the teams from using adjustable wings).

Murray’s solution was not wholly original. The principle was based on the 1970 Chaparral 2J Can-Am car, which used a fan powered by a separate 55hp engine to suck the car to the ground.

The modified car was dubbed the BT46B and team leader Niki Lauda tested it at Brands Hatch:

The new Brabham was unpleasant to drive. It understeered massively, all the more so when you took your foot off. The fan was powered by the engine, with the result that the suction effect fell off when the revs dropped. After a couple of test laps at Brands I started to adjust my driving style. Whenever the car failed to respond going into a corner, you had to put your foot down rather than ease off. This way, the car would be sucked down tighter against the track and would corner at incredible speeds.

Unsurprisingly the combination of the car’s substantial performance advantage and elegant circumvention of the rule book sent the rival teams into apoplexy when the car was rolled out for the Swedish Grand Prix at Anderstorp.

Drivers threw about accusations that the rearward-facing fan spat stones at them. Murray countered that the fan did not spin quickly enough for this to be possible and, even if it did, the stones would come out sideways, not backwards.

The demise of the BT46B was a purely political affair.

In 1978 Ecclestone was only beginning to build his enormous empire and much of his power came from his representation of the teams through the Formula One Constructors’ Association.

Thus his adamant defence of the BT46B’s legality softened somewhat when Chapman & co. suggested the constructors could always find themselves a different representative…

To Murray’s anger, Ecclestone backed down but, as ever, tried to broker himself a favourable deal. He proposed that the car be banned after three races, which his rivals agreed to.

Lauda played it cool in qualifying, letting Mario Andretti take the pole position in the Lotus. He stalked Andretti on race day, then when the Lotus failed on lap 46, waltzed off to victory (team mate John Watson retired following a spin).

But the BT46B would not get its promised three outings. When the Commission Sportive Internationale (now the FIA) got wind of the deal they pronounced that, if the car was illegal, then it could not race at all.

It was an enormous blow to Murray who felt his legitimate innovation had been killed for entirely political reasons. But subsequent years brought the success his talents merited at Brabham and, later, McLaren.

In time, too, ground effects would also be banned – which we’ll take a look at in a later feature.