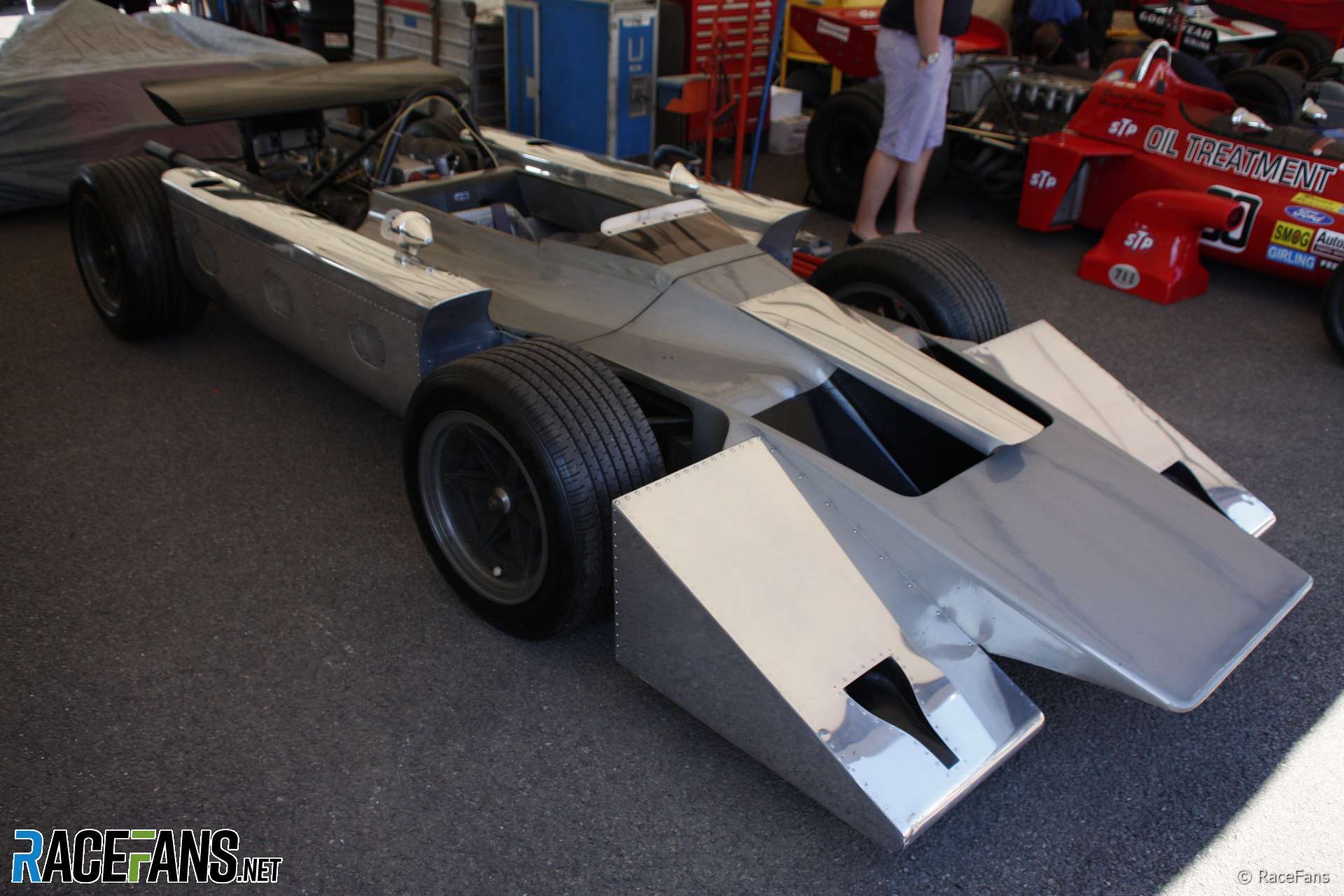 Several teams dabbled with four wheel drive cars before the technology was outlawed but all struggled to get enough of an advantage from the technology to justify the sacrifices made on other parts of the car.

Often it was only when four-wheel drive power transmission was paired with other technologies that would be banned – gas turbine engines and six-wheel cars – that a substantial performance advantage was found.

Having said that, a more conventional four wheel drive did win one Grand Prix – though perhaps that had at least as much to do with the genius of its driver as anything else.

Although it revolutionised rallying in the 1980s four wheel drive proved a technological blind alley for Formula 1. But it didn’t stop people trying.

One of the first serious attempts to field a four wheel drive Formula 1 car was the Ferguson Research company’s P99. The car made its sole Grand Prix appearance in 1961 which proved poor timing.

The car had originally been designed to accommodate a 2.5 litre V8 Coventry Climax engine but a change in the rules limited Grand Prix cars to 1.5 litres from 1961.

The P99’s engine was downgraded accordingly but this served to exaggerate one of the shortcomings of four wheel drive cars – that more power is lost in the transmission system.

It had also been conceived at a time when front-engined cars were de rigeur – but by the time it raced the rear-engined revolution was in full swing.

Another problem was the extra weight of the additional component needed to supply power to both ends of the car. But Ferguson came up with some innovative solutions to that, using magnesium alloys for the different casings to keep the weight down. At 660kg (1,456lb) it was not much heavier than that years BRM and Cooper entries.

It was entered by Rob Walker’s team for that year’s British Grand Prix at Aintree with Jack Fairman, something of a journeyman, at the wheel. Although the race was wet – conditions in which a four wheel drive car would be expected to have an advantage – Fairman ran 13th.

He pitted with electrical problems at which point the car was taken over by Stirling Moss, whose Lotus 18 had been sidelined with brake trouble. The car was doomed to disqualification because Fairman had received a push-start in the pits but Moss was impressed by the car:

In those still damp conditions I found it went like a rocket! But it also felt most odd. It was nothing like any other car I had ever driven. It made absolutely unique driving demands, but I began to appreciate that, once I could learn how to use its potential, then it really would offer great advantages.

Moss’s confidence proved justified when he took the car to victory at the non-championship Oulton Park Gold Cup in September year. But any further involvement Moss might have with the project was ended with his crash at Goodwood the following year that terminated his racing career.

The Ferguson found its way into the 1963 Tasman series and the following year it won the British Hill Climb Championship in the hands of Peter Westbury, before being retired.

Four wheel drive was next seriously tried out towards the end of the 1960s. One of its pioneers was inevitably Colin Chapman, who could be expected to be at the cutting edge of any technological vanguard.

In 1969 Chapman believed that four wheel drive would be the technical solution he needed to his cars reduction in traction following the banning of high-mounted aerodynamic wings.

He already had experience of four wheel drive technology having run the system on gas turbine powered cars at Indianapolis in 1968 (see Banned! Gas turbine engines). The Lotus 63 would be powered by the ubiquitous Ford DFV and feature four wheel drive.

As with the P99, four wheel drive forced many compromises on the design. The engine had to be rotated 180 degrees and the transmission system situated between it and the driver. A prop shaft passed the driver’s seat on the left to transmit power to the front wheels.

The poor driver had to sit with his legs underneath the front axle – perilously dangerous in the event of a frontal impact, even in the days when driver safety was seldom an major concern.

Because of that neither Graham Hill nor (ironically) Jochen Rindt consented to drive the 63 – to begin with at least. The role of developing the car was left to John Miles, who did not have as many kind things to say about the technology as Moss had.

The combination of the increased weight over the front wheels compared to an ordinary car, the driven front wheels and the extended wheelbase made the car understeer very strongly.

In an attempt to lessen the understeer more and more of the power was shifted rearwards which in Miles’ words, “turned a quite decent four wheel drive car with some potential into a really awful rear wheel drive car.”

Miles first raced the car in the French Grand Prix and retired with fuel pump problems. At the British Grand Prix Jo Bonnier drove a second 63 but neither did well: Bonnier suffered engine failure and Miles nine laps down having driven the last 30 with only third gear.

Mario Andretti crashed a 63 in the German Grand Prix. He also drove one at Watkins Glen where the car proved equally useless in wet conditions where it should have shone. Andretti was fifth slowest in the dry (with 88% of power going to the rear of the car) and fifth slowest in the wet as well.

Rindt was eventually persuaded to drive the car in the Oulton Park Gold Cup and finished second, 85s behind Jacky Ickx’s Brabham in a race with few entrants.

But all teams found the same shortcoming with the system. It offered too little and asked too much. The increased gains in traction following the loss of high wings would not come from four wheel drive, but improved tyre compounds, the introduction of slicks and the growth of more conventional aerodynamics.

When Williams created a six wheeled F1 car with four driven wheels they found a serious step forward in performance. So great, in fact, that the governing body stepped in and banned both six wheeled cars and four wheel drive.

The four driven wheels at the back of the car (with an ordinary, un-driven pair up front for steering) gave excellent traction and the car originally allowed for an even greater harnessing of ground effect aerodynamics.

Although four wheel drive is no longer allowed in Formula 1 it’s questionable whether anyone would use it if it was.

Modern F1 cars have enormous amounts of traction thanks to their extremely grippy tyres and enormous aerodynamic grip – to say nothing of their complex traction control systems. On top of all that, the mechanical complexity and burden of four wheel drive would likely be surplus to requirements.