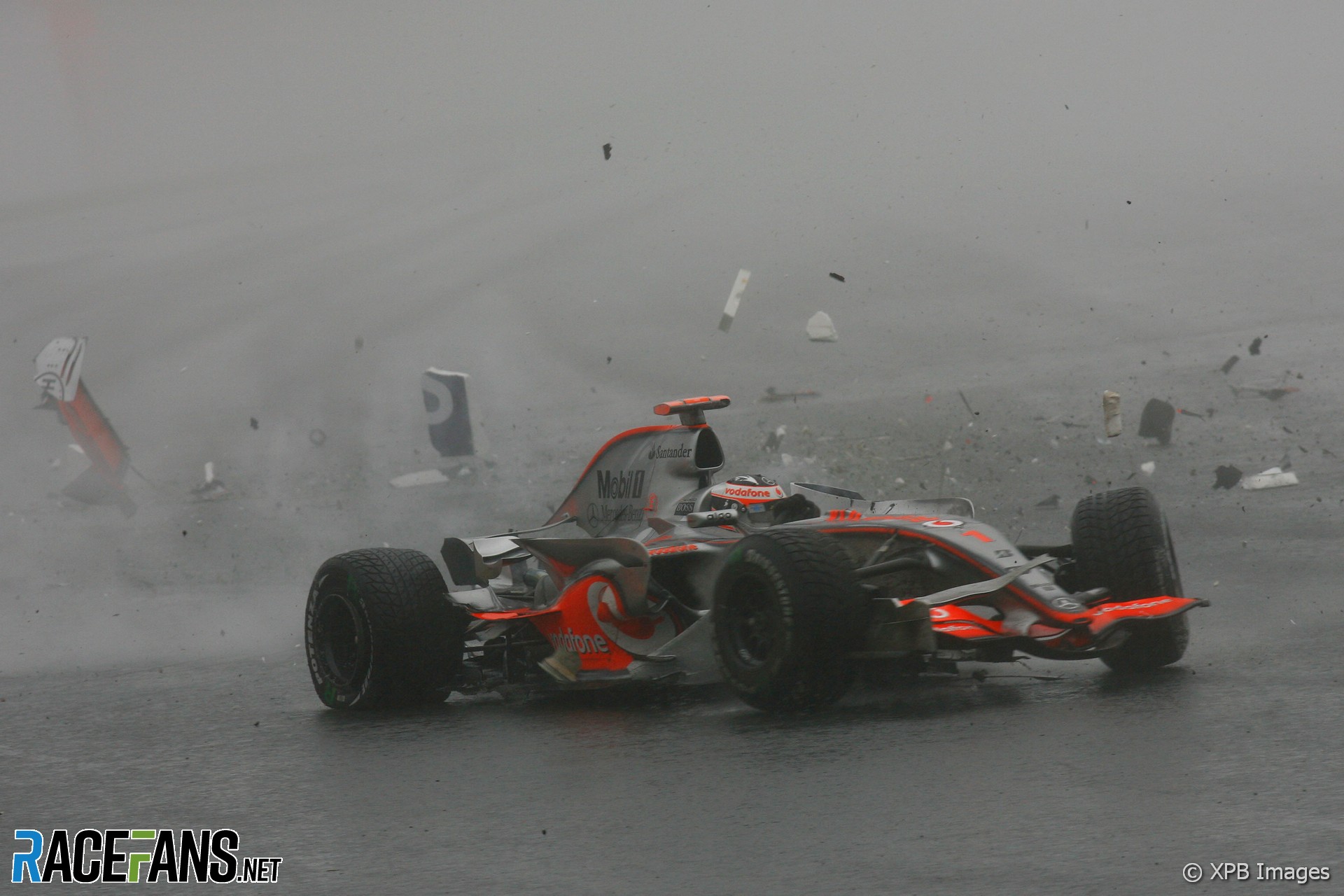 Atrocious conditions at the Fuji Speedway and a collision with Robert Kubica failed to put Lewis Hamilton off his stride.

The rookie put in a performance worthy of a ten-year veteran, triumphing in pouring rain in Japan to score a magnificent – and vital – victory.

A crash ended Fernando Alonso’s race and dropped him 12 points behind Hamilton in the title race.

The sight of the Fuji Speedway shrouded in mist and drenched in rain evoked memories of the first Japanese Grand Prix at the circuit in 1976.

But safety standards are much tougher these days and race control elected to start the race behind the Safety Car. The start didn’t come until lap 19, however, with the field spending over half an hour queued up.

This caused an understandable amount of confusion, not least at Ferrari, who claimed they had not heard a warning from the stewards instructing all teams to start the race on extreme wet tyres.

Kimi Raikkonen and Felipe Massa were the only drivers to pull away for the grid on intermediate wet tyres and the folly of that decision became immediately apparent.

Massa spun off on his second tour of the circuit at reduced pace and both drivers quickly pitted for fresh tyres. But once the start was finally given Massa was summoned into the pits for a drive-through penalty for overtaking Nick Heidfeld after coming back onto the track.

But even the drivers on full wet tyres were having trouble pointing their cars straight. Jarno Trulli pirouetted his Toyota on lap 13 with the safety car still on-track.

For a long time it looked as though the race would never get a proper start but the race was finally green-flagged after 18 laps behind Bernd Maylander’s Mercedes.

At the front of the field Lewis Hamilton gave Fernando Alonso plenty to think about, repeatedly making fake starts before finally nailing the throttle and sprinting down to the first corner well clear of his team mate.

Almost inevitably there was a tangled further back. Alexander Wurz lost control under braking and swiped into Felipe Massa’s car. That put the Williams out but the Ferrari was able to continue.

Jenson Button and Nick Heidfeld had also clashed at the start, knocking Button’s front wing off. He stayed out for a couple of laps – possibly expecting the re-appearance of the safety car – before pitting.

After his delay Raikkonen began to make his way up the order. By lap 23 he was 13th but already 36s behind leader Hamilton. He made up two places over the next three laps – but lost another nine seconds.

Up front the McLarens were the only cars lapping under 1’30s, with Sebastian Vettel in the Toro Rosso slipping backwards. Mark Webber was fourth ahead of Giancarlo Fisichella, who had a string of three cars within four seconds of him.

That gaggle of cars became crucial when the McLarens made their pit stops, because Alonso came out behind them but Hamilton stayed out in front of them. Hamilton’s three second advantage before his pit stops stretched as Alonso made a mistake on his out lap.

Alonso then got stuck into Heidfeld – passing the BMW on lap 33 but losing the place again on the next tour. Vettel – who had been leading – pitted at the same time and on lap 35 made a move on Alonso – the pair collided, and although both of them continued Alonso was passed by the flying Raikkonen.

Just as Alonso was cursing his luck much the same was happening to Hamilton. Robert Kubica perhaps misjudged the line he was taking through the penultimate bend – but the result was the BMW driver knocking Hamilton into a spin. Again, both continued, but Kubica picked up a drive-through penalty for the move.

It was still raining hard and lap times had begun to increase once again. Nevertheless Alonso was attacking the gap to Hamilton, taking over a second off him on one lap.

But he pushed too hard and on the very next lap smashed into the barriers behind the pits. He had picked up damage in his collision with Vettel, but later denied it played a role in the crash.

The safety car returned to the car as Alonso’s wreckage was cleared. Behind Hamilton the order was quite unusual – Webber had taken up second with Vettel third and Vitantonio Liuzzi fourth, until he made his pit stop on lap 44.

Two Red Bull-backed cars on the podium would have been a dream for the team – but a lamentable mistake by Vettel on lap 46 put both himself and Webber out of the race. The only consolation for the German was that he was able to creep back to the pits and avoid Webber’s wrath. It was a bitter end to a fine performance by both drivers.

That promoted Heikki Kovalainen to second and Massa third. Raikkonen was seventh behind David Coulthard, Fisichella and Heidfeld.

The race got going once more on lap 48, with Hamilton again backing the field up and keeping Kovalainen at bay.

Ferrari certainly wanted Raikkonen to get maximum points and he put himself in contention by passing Coulthard with a brave move for fourth on lap 56. That put him behind Massa. Conveninetly Massa was then brought into the pits which apparently was needed despite the fact he’d bee in three times already – although at least once for a drive-through penalty.

Raikkonen took up third and his next target was Kovalainen. But his compatriot drove carefully – never wasting his time with unnecessary defensive moves – and kept the faster Ferrari at bay until the end.

Somehow the rain got even harder towards the end of the race – the drivers lapping over five seconds slower than the had after the first start. But Hamilton, despite driving on more worn tyres than most of his rivals, put in a peerless drive, stretching a lead and maintaining it until the flag.

Coulthard finished fourth ahead of Fisichella’s Renault. But behind them Massa prevailed in a thrilling last-lap tussle with Kubica, the pair running each other up to and beyond the edges of the circuit.

A late pit stop for Rubens Barrichello dropped him out of eighth place, promoting Liuzzi into eighth place after the Italian had passed Adrian Sutil.

Barrichello finished tenth ahead of his team mate Button, who retired on the last lap after a despondent race that had promised much. Behind him were Sakon Yamamoto, Jarno Trulli, the retired Heidfeld, and Sato who survived a brief fire after his pit stop.

But Hamilton’s magnificent fourth career victory sets him up to clinch the drivers’ championship in his rookie year. Say what you like about the McLaren team, after today’s drive there’s no question he deserves it.

Update: Following the race Liuzzi was given a 25-second penalty for passing Sutil under yellow flags. That promoted Sutil to eighth giving the German the first point of his career.

It was frustrating watching 18 laps behind the Safety Car, but the rest of the race was a nail-biter.