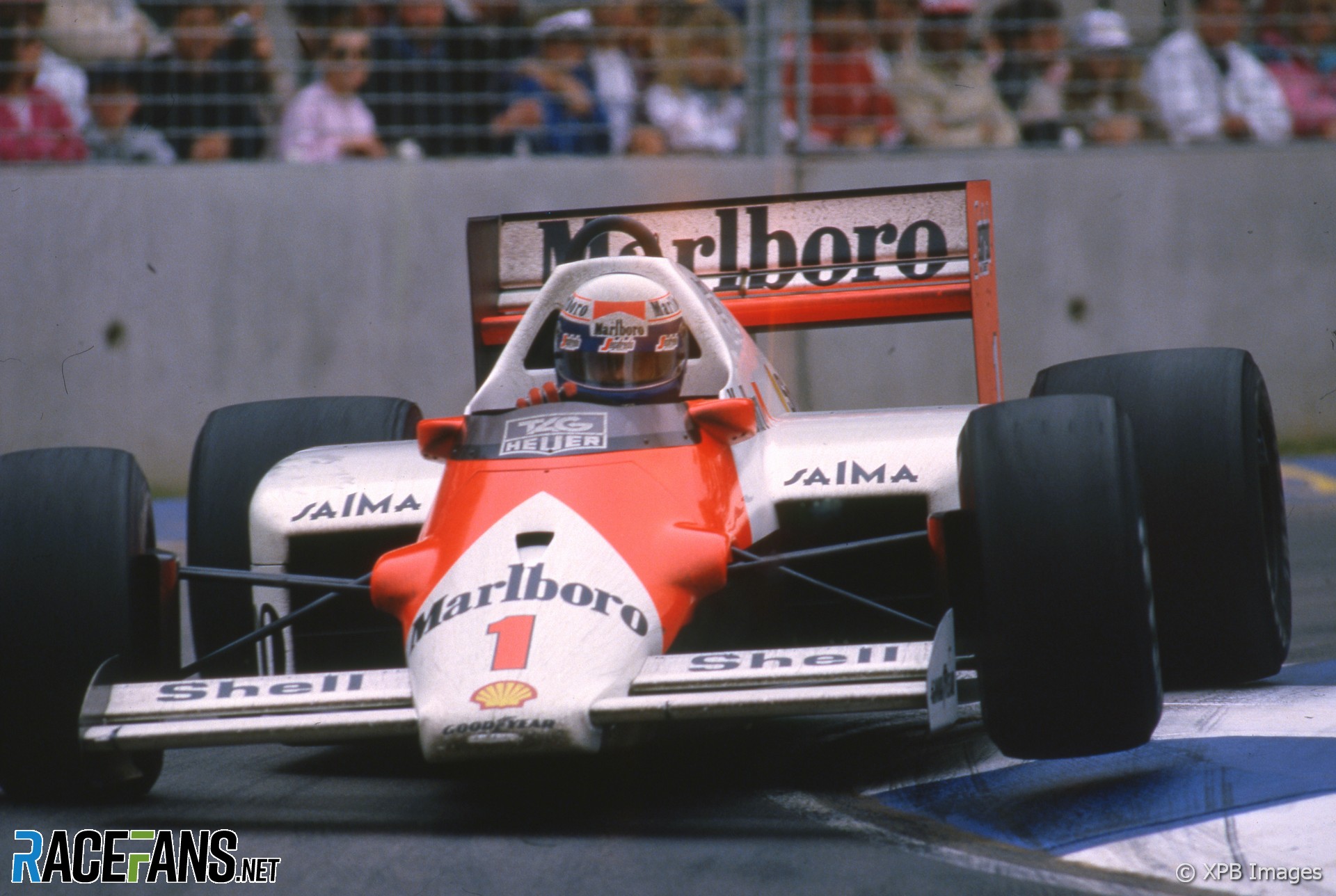 The last time three drivers headed into the last race of the year fighting for the championship it produced one of the most astonishing races ever seen.

Here’s how that sensational race unfolded.

The image imprinted on everyone’s minds from the 1986 Australian Grand Prix is of Nigel Mansell hurtling down Dequetteville Terrace on lap 64. As his Williams-Honda passed Philippe Alliot’s Ligier, Mansell’s left-rear tyre exploded, a shower of sparks bursting from the rear of the car as he wrestled it under control.

It’s easy to think that Mansell was simply a victim of a single rogue tyre that suddenly failed. But in fact the calamity might have been avoided had it not been for an unlikely series of chance occurrences.

The kind of misfortunes that will be keeping today’s title rivals awake at night.

Going into the final round of 1986 the championship situation was complicated. In those days the top six received points 9-6-4-3-2-1, but on top of that a driver could only count his best 11 scores. In short Mansell, with 70 points, needed at least third place to beat Prost, who had 64.

Mansell’s team mate Nelson Piquet was third with 63 points, and the two got on about as well as Lewis Hamilton and Fernando Alonso do today.

Mansell scorched to pole ahead of Piquet and Ayrton Senna. Prost was fourth and his team mate Keke Rosberg seventh for his final race, and already promising to do everything to help Prost win the title.

The start of the race was frantic. Mansell held the lead for the first corner, but Senna muscled past him, then Piquet and then Rosberg. Next Piquet took Senna for the lead at the end of Dequetteville Terrace.

Rosberg was going hell for leather, passing Senna for second on lap two before reeling Piquet in. On lap seven Piquet surrendered the lead and Rosberg scampered off.

Senna quickly fell back and the top four became an all McLaren and Williams affair. Rosberg led Piquet, and Prost took up third ahead of Mansell on lap 11. Third became second for Prost on lap 23, when Piquet succumbed to pressure and spun off, letting Mansell past as well.

The first turning point in the race came on lap 32 and it was a true blessing in disguise for Prost. The Frenchman limped towards the pits, his right front tyre punctured, took on new rubber but fell to fourth behind the Williams drivers.

It looked as though his race was ruined, but it eventually proved the key to him winning the race. The Goodyear tyre technicians inspected his discarded rubber, saw that it was in good condition, and informed the other teams that they could reach the end of the race without needing to stop to fit fresh tyres.

A few laps later Mansell was held up by traffic and when Piquet made a move to pass Mansell steered well clear. Piquet taking second was no problem as long as he kept third.

Finally it seemed the race had settled. Rosberg was clear ahead in the lead and could do nothing to help Prost, who was stuck in fourth. Mansell, third, was apparently cruising to the title.

That much seemed assured when, on lap 63, Rosberg retired. With the McLaren gone there was one less car standing between Mansell and the championship, and it mattered not that Prost had passed him, leaving Mansell third once again.

Rosberg had heard a loud noise from the rear of the car and, immediately assuming it must be an engine failure, he coasted the car to a halt at the side of the track.

But as he got out of the car he saw the trail of rubber hanging from his right-rear tyre. It hadn’t been engine failure, it had been tyre de-lamination. The compounds weren’t lasting the race distance. Back in the pits, the Goodyear technicians had no idea.

Even if they had, it was too late to do anything about it, because Mansell was already on lap 64 and heading down Dequetteville Terrace.

Mansell somehow brought the Williams to a halt without hitting anything. The rear axle twitched one last time as the car nosed into the barrier at the end of the straight.

The two sudden retirements left Piquet leading from Prost, the Brazilian on the verge of winning the championship, but there was no hesitation in bringing him in for fresh tyres. That left Prost in the lead, thanks to his early pit stop to repair a puncture.

None of this is to suggest that Prost was an unworthy champion in 1986. Far from it – he won a championship without the benefit of the best car in the field, alongside a fellow world champion who failed to win a single race.

But on the day of reckoning in 1986, fortune truly smiled upon Prost.

4 comments on “Heartbreak for Mansell in dramatic Adelaide finale”