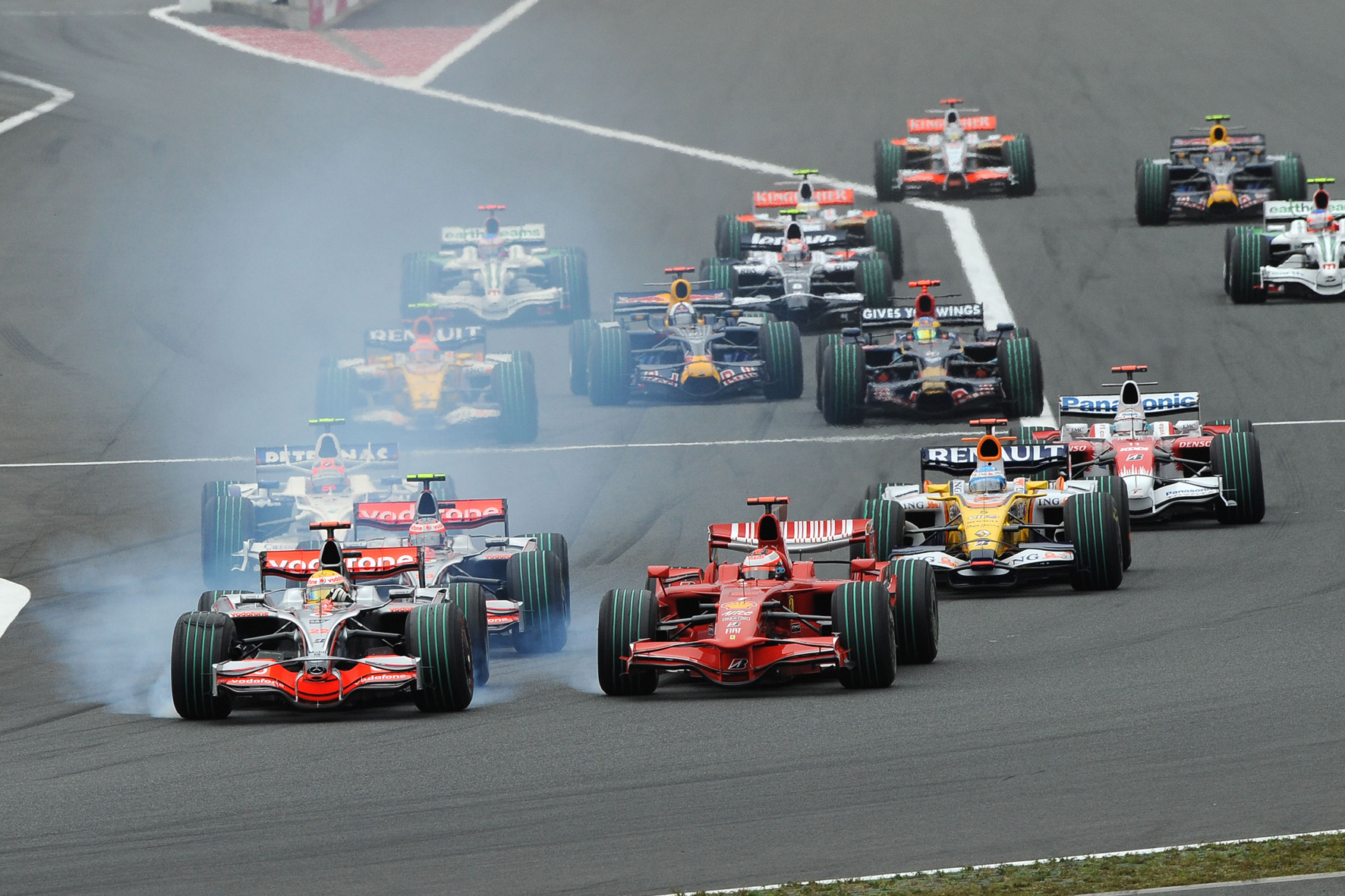 Lewis Hamilton has been accused of being too hot-headed and risking too much in championship-deciding situations. Felipe Massa has been criticised for making mistakes in wheel-to-wheel battles.

Watching the Japanese Grand Prix, it wasn’t difficult to understand why. As the two championship contenders provoked controversy in the opening laps, Fernando Alonso motored through to claim a second, richly deserved victory.

Hamilton threw away his hard-earned pole position the instant the lights went out as Kimi Raikkonen zapped past him. Not for the first time, Hamilton seemed to lose sight of the fact that his championship rival was Massa, not Raikkonen, and risked everything in a do-or-die move to recapture the lead.

He dived for the inside, smoke pouring from locked wheels, and ran wide, forcing Raikkonen to take evasive action. Massa, who was also at the outside of turn one, was similarly delayed, and the mess allowed Robert Kubica and Alonso into the lead from sixth and fourth on the grid respectively.

Hamilton made a slow recovery and was passed by Heikki Kovalainen, Jarno Trulli and the Ferraris. But on the second lap he got a clear run up the inside of Massa at turn ten and was through. Massa tried to come back at him at the following left-hander, but with two wheels on the kerb and two wheels on the grass he tipped Hamilton into a spin and down to last

McLaren responded by pitting Hamilton straight away to discard his badly flat-spotted tyres and inspect the damage from the collision with Massa – which included the barge boards and part of the floor. When he returned to the track he was 52 seconds behind leader Kubica.

Hamilton was not the only driver in trouble on the opening lap. David Coulthard was swiped sideways into the barrier at the exit of turn one. Kazuki Nakajima lost his front wing and had to pit for a replacement – an ironic development for the Japanese driver at his home race, since he had eliminated Alonso during his home event at Valencia on the first lap.

Within a few laps Massa and Hamilton were hit with penalties: Hamilton for the turn one incident, Massa for hitting Hamilton.

That sent Massa plunging down the order from sixth to 14th and cost Hamilton even more time.

Meanwhile Raikkonen had passed Jarno Trulli for fourth on lap seven with a neat move at turn ten. That became third when Kovalainen came to a halt on lap 16 with what turned out to be engine failure.

Up front Kubica was leading Alonso but unable to pull away quickly despite having slightly less fuel. The BMW driver made his first pit stop on lap 15 and although the Renault only stayed out one lap longer, it was enough for Alonso to leapfrog ahead of Kubica. This pit stop switch-around decided the winner of the race.

Jarno Trulli took over the lead (Raikkonen having pitted), and Sebastien Bourdais and Nelson Piquet Jnr also took turns to head the field. But once the first round of pit stops was over, Alonso was firmly in control.

Massa’s penalty and pit stop left him 13th with Hamilton just 10 seconds behind. After being briefly stuck behind Jenson Button he found a way through and Hamilton followed a few laps later.

Hamilton made his final pit stop on lap 41, leaving him with a 26-lap run to the flag. Massa, however, didn’t have to make his last stop until lap 52 and he was setting fastest laps in the run-up to it as the chance of a point or two beckoned.

But on lap 50 Sebastien Bourdais came out of the pits in front of him and the pair collided at the first corner, Massa spinning around. After the race the stewards added 25 seconds to Bourdais’ time.

Raikkonen emerged from his final pit stop directly behind Kubica in a battle for second place. The Ferrari was clearly quicker than the BMW, and the long, wide straights of Fuji gave him little chance to run an hide.

Still, Kubica gave a master class in defensive driving: he covered the inside of the hairpin when he had to, and took care to slow Raikkonen’s pace at the apex of the corner to deny him a run at the next bend.

After several laps of careful and utterly clean defending by Kubica, Raikkonen’s attacks began to fade and he settled back into the third place he would keep until the flag.

Further back Massa was finding his rivals’ defensive tactics either irrelevant or inadequate. He made light work of the other BMW of Nick Heidfeld, passing him on the main straight as if his Ferrari had an extra gear.

That brought Massa onto the tail of Mark Webber on lap 64. Webber covered the inside line on the right but Massa dived to Webber’s extreme right, over the pit lane exit, to get alongside the Red Bull.

Had Webber continued straight ahead Massa would have been obliged either to lift the throttle or run out of road. But Webber backed down, pulled left and gave Massa the space to take the position.

Alonso took the chequered flag after 67 laps to score his second consecutive win of the season. At Singapore he rode his luck, but here he beat Kubica in a straight fight and capitalised magnificently on Ferrari and McLaren’s problems.

Kubica’s defence of second place was gritty stuff, and the eight points leaves him 12 behind Hamilton with two races to go. But for that penalty at Singapore, he would be an extremely convincing championship contender.

Raikkonen salvaged third for Ferrari and that, along with Massa’s seventh place (promoted from eighth after Bourdais’ penalty) put the Italian team back in the lead of the constructors’ championship. After Ferrari’s failure to score in Singapore, the same fate befell McLaren at Fuji.

Nelson Piquet Jnr took fourth on merit despite a hiccup on lap 62 when he spun at turn five, losing four seconds. He still kept Jarno Trulli behind which was a major blow for Toyota on home ground. With Timo Glock retiring early on, Toyota are now 16 points behind Renault in the battle for fourth in the constructors’ championship.

Sebastian Vettel was promoted to sixth ahead of Massa and Webber. Heidfeld was tenth, Nico Rosberg 11th and Hamilton was the final runner on the lead lap – he un-lapped himself from Alonso on the final tour in the forlorn hope four or more driver might stop on the last circuit.

Both the Honda drivers oddly set their fastest laps of the race on the final lap, Rubens Barrichello 0.7s ahead of Jenson Button after a miserable home outing for the team. Nakajima limped in 15th and last in his first home race, though he at least fared better than the Force Indias, neither of which finished.

80 comments on “Alonso wins as Hamilton and Massa stumble”