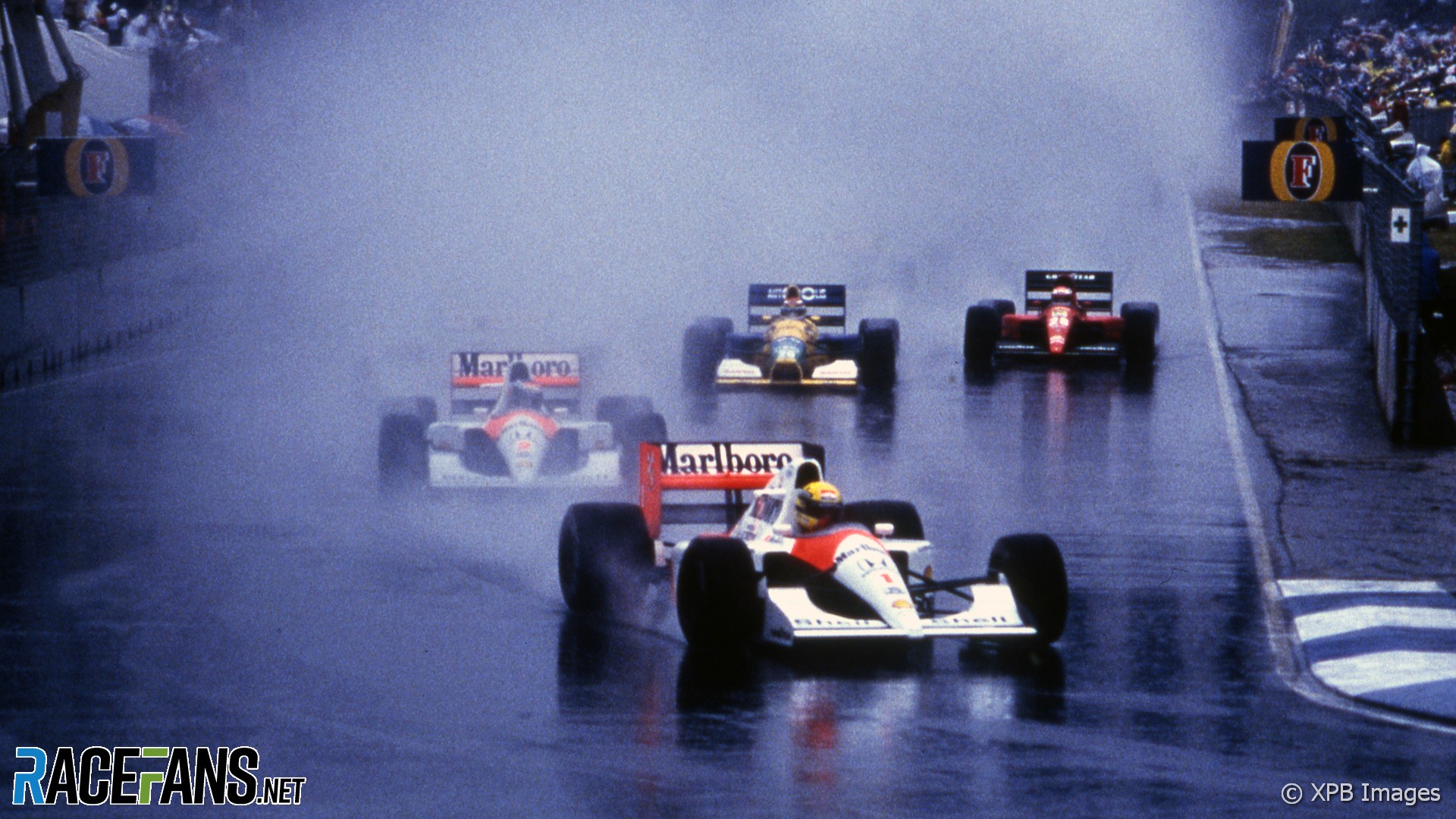 James posted the following idea for an article on Skribit:

Which was the wettest Grand Prix of all time?

Surely that was Adelaide 1991. The race was red-flagged after 14 laps.

There may have been wetter races but it’s not an easy thing to measure. But we do know the rain stoppage made the 1991 Australian Grand Prix the shortest F1 race ever, at a little more than 32 miles. Here’s a look back at that extraordinary day.

The world championship didn’t go down to the final race in 1991. It was decided in the penultimate round at Suzuka when Nigel Mansell, chasing title rival Ayrton Senna, spun into retirement at the first corner. That sealed Senna’s third and final world championship title.

That didn’t mean F1 was short of drama ahead of the last race. After winning the title Senna launched into a famous broadside against outgoing FISA president Jean-Marie Balestre, whom Senna blamed for his disqualification from the same race two years earlier, which cost him the 1989 title.

Senna’s nemesis Alain Prost was also making life difficult for himself. Before the final round of the season the (then) three-times champion was cast out of the Ferrari team for describing his 643 as follows:

In Japan, the car was like a horrible truck to drive. No pleasure at all. I’ve underlined the defects of the Ferrari throughout then season, but no-one has listened to a word.

With no contract for 1992, Prost was out of F1 for the foreseeable future. Another three-times title winner was leaving for good: Nelson Piquet, who was starting his final race for Benetton alongside Michael Schumacher, who was making his sixth F1 appearance.

The drivers’ championship may have been over, but the constructors’ championship was still up for grabs. McLaren, though, looked hard to beat with 132 points to Williams’ 121 – and this was in the days when points were only scored by the top six, 10-6-4-3-2-1, making their job even harder than it would have been today.

The entry list for the 1991 Australian Grand Prix makes todays 20-car grids look pitiful. There were 32 cars entered, and before the race got underway six entrants were weeded out in pre-qualifying and qualifying. They were:

Suzuki missed out on qualifying by a tenth of a second to Karl Wendlinger, the Austrian making his debut for Leyon House. The remaining 26 cars lined up with the first four rows occupied Noah’s Ark-style by four pairs of team mates: the McLarens (Ayrton Senna and Gerhard Berger), Williamses (Nigel Mansell and Riccardo Patrese), Benettons (Nelson Piquet and Michael Schumacher) and Ferraris (Jean Alesi and Gianni Morbidelli, the latter substituting for Prost).

Two years earlier Prost had withdrawn from the Australian Grand Prix as heavy rain made the conditions impossible. He surely would have done likewise in 1991, as the conditions were somehow even worse.

As Senna led Berger into the first corner the 24 cars behind them seemed to vanish behind a wall of water.

It wasn’t just the drivers who were having trouble seeing anything. The track-level cameras struggled to pick out the cars – Mansell passed Berger for second early on, and it was only when the Williams driver appeared in second that the commentators noticed. The television director increasingly relied on a camera mounted in a helicopter to spot the drivers.

Despite this Mansell quickly caught Senna and even tried to find a way to pass him. In his autobiography Mansell recalled making a move to pass but finding parts of the track blocked by crashed cars:

As I came down the straight I was right on Senna’s tail and ready to pass. I got on the radio to David Brown with probably the strangest question I had ever asked him. “David, can you see on the television? Is it safe for me to overtake?” It was a crazy situation and really very dangerous. The stranded cars were there alright, hidden by the spray.

The cars of Nicola Larini, Thierry Boutsen and Jean Alesi were strewn along each side of the straight, and only the quick reaction of Mansell stopped him from coming to grief on the same straight where his title hopes had ended five years later. But this time, the consequences could have been even more serious.

This was in the days before the safety car was in regular use, and it’s shocking to see stationary cars left in harm’s way and a recovery vehicle parked on the track while F1 driver blast between the wrecks. Patrese collected a piece of someone’s front wing which became stuck beneath the car.

After a dozen laps the intensity of the rain increased yet further. Suddenly Mansell was gone, the car snapping away from him as he joined Wakefield road. He hit the barrier hard, injuring his ankle. Now the organisers threw the red flag.

Alessandro Zanardi was driving the Jordan which, a few races earlier, had famously been left vacant by Schumacher. Zanardi had crashed it twice in his first three laps of practice in the dry, but in the rain he was flying, setting the fifth fastest lap. Had the race gone on a lap longer, he would have scored his first points:

Just before the red flag was waved, I overtook two cars, including Stefano Modena who was driving a Tyrrell-Honda. This was one of the craziest things I’ve ever done. I had been following him for a while and gaining speed, so much so that in the technical sector of the circuit, I almost tripped over him. I couldn’t see where I was going because of the spray off his car. On the straight, with water like that I couldn’t get into sixth gear and drove in fifth with a feathered throttle to avoid the risk of aquaplaning everywhere.

Zanardi was running fifth when the red flag came out, but final positions were determined by the running order on the previous lap, when he’d been ninth.

The teams waited a long time to see if the conditions would improve, before finally giving up. The race lasted 14 laps and fewer than 25 minutes. Half points were awarded to the top six drivers at the end of the 14th lap, before Mansell had his crash, and McLaren were confirmed as constructors’ champions:

But one driver wasn’t ready to finish just yet. Piquet had spun his car through 360 degrees at Stag Turn, but back on the grid he still wanted to continue. After final word that the race was being cancelled, he implored chief engineer Giorgio Ascanelli to let him do a few final, unofficial laps. Ascanelli understandably refused, and nearby mechanic Steve Matchett observed the final moments of Piquet’s career unfold:

Nothing happened for a moment or two, and then I heard the click of the belt buckle and he gently pulled the steering wheel from the column. Two hundred and four Grand Prix starts, 24 pole positions, 23 race victories, 485.5 points and three drivers’ world championships. It was finished.

Update: In 2021 the Belgian Grand Prix broke the record for F1’s shortest race