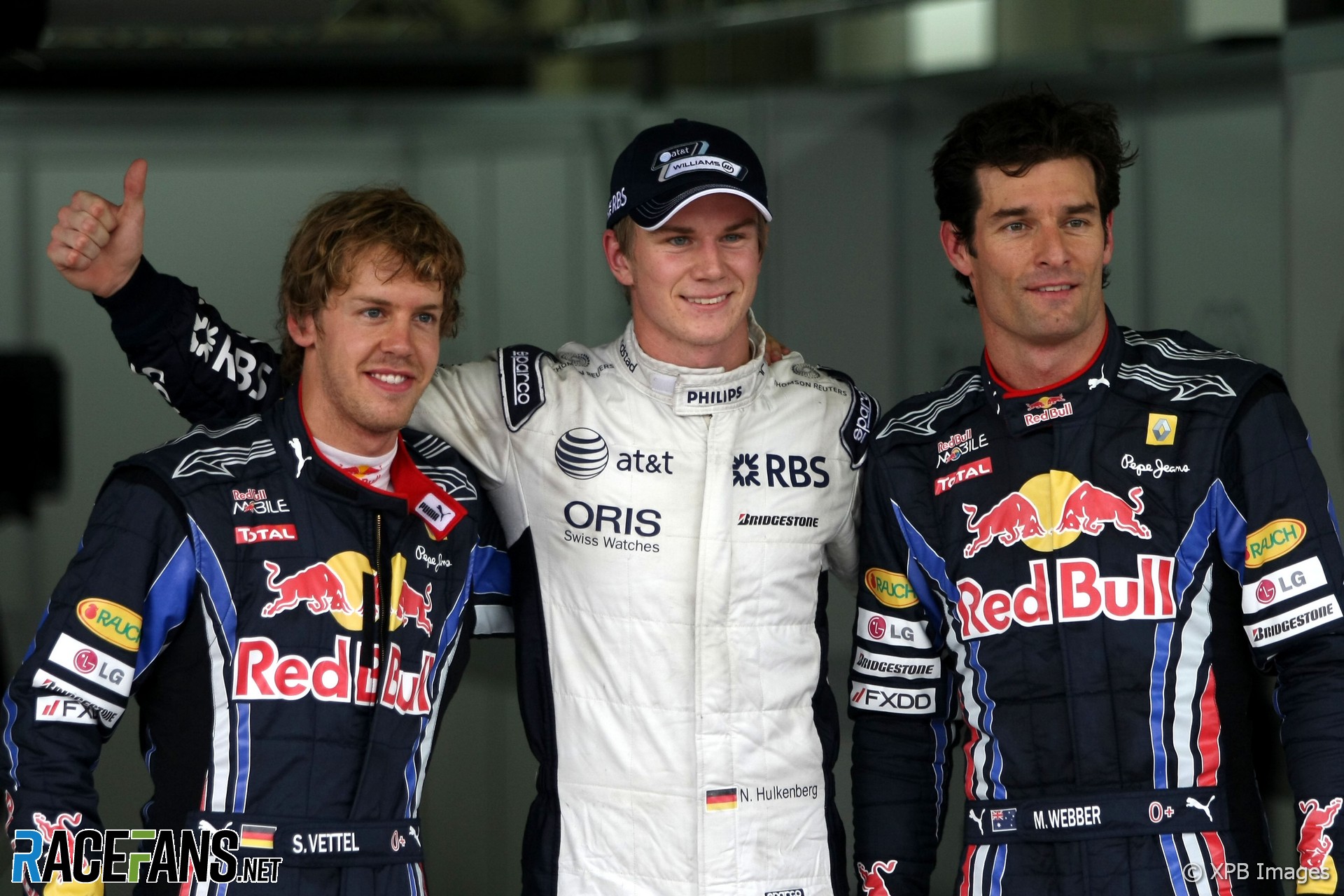 Nico Hulkenberg took a shock pole position for Williams in qualifying for the Brazilian Grand Prix.

The rookie heads the Red Bull duo, Vettel ahead of Webber, with Hamilton fourth and Alonso fifth.

But Jenson Button faces a tough race after failing to reach Q3 and qualifying 11th.

More rain fell between the end of practice and the start of qualifying, meaning Q1 began on a wet track.

With more rain expected, all the drivers hit the track the moment the session began and most stayed out all the way through, some of them logging 15 laps.

But the rain held off until the final moments of the session and the usual six cars from the new teams were at the bottom of the times, headed by Timo Glock.

Once again Force India struggled for pace in Q1 and the battle to survive into Q2 was contested almost exclusively by their drivers.

Adrian Sutil, who already has a five-place grid penalty for the race, was beaten to 17th by team mate Vitantonio Liuzzi.

But he might have made it had he not been held up by Liuzzi when he rejoined the track after spinning off at Mergulho.

The Red Bull drivers led the way as the track continued to dry in Q2. Webber led Vettel, Kubica, Hamilton and Schumacher.

But the drama of the session came as Felipe Massa and Jenson Button battled to avoid elimination.

A last-minute improvement by Massa got him into Q3 by just 0.088s.

Nico Rosberg also failed to make it into Q3, ending up 13th behind Kamui Kobayashi.

Team mate Michael Schumacher made it into the top ten shoot-out, as did both Williamses and both Renault.

All the ten drivers in Q3 started off on intermediate tyres for banker laps before switching to super-softs.

Lewis Hamilton was quickest to begin with on intermediates and re-took the top spot after changing tyres.

But Nico Hulkenberg produced a series of ultra-rapid laps on an ever-improving lap and incredibly moved the target time well beyond the reach of the championship contenders.

Fernando Alonso briefly took pole position back from him but Hulkenberg took it back again.

He still had one lap to spare and he used that to set a 1’14.470, over a second faster than any other driver.

The Red Bull pair line up behind him with Hamilton in fourth ahead of Alonso.