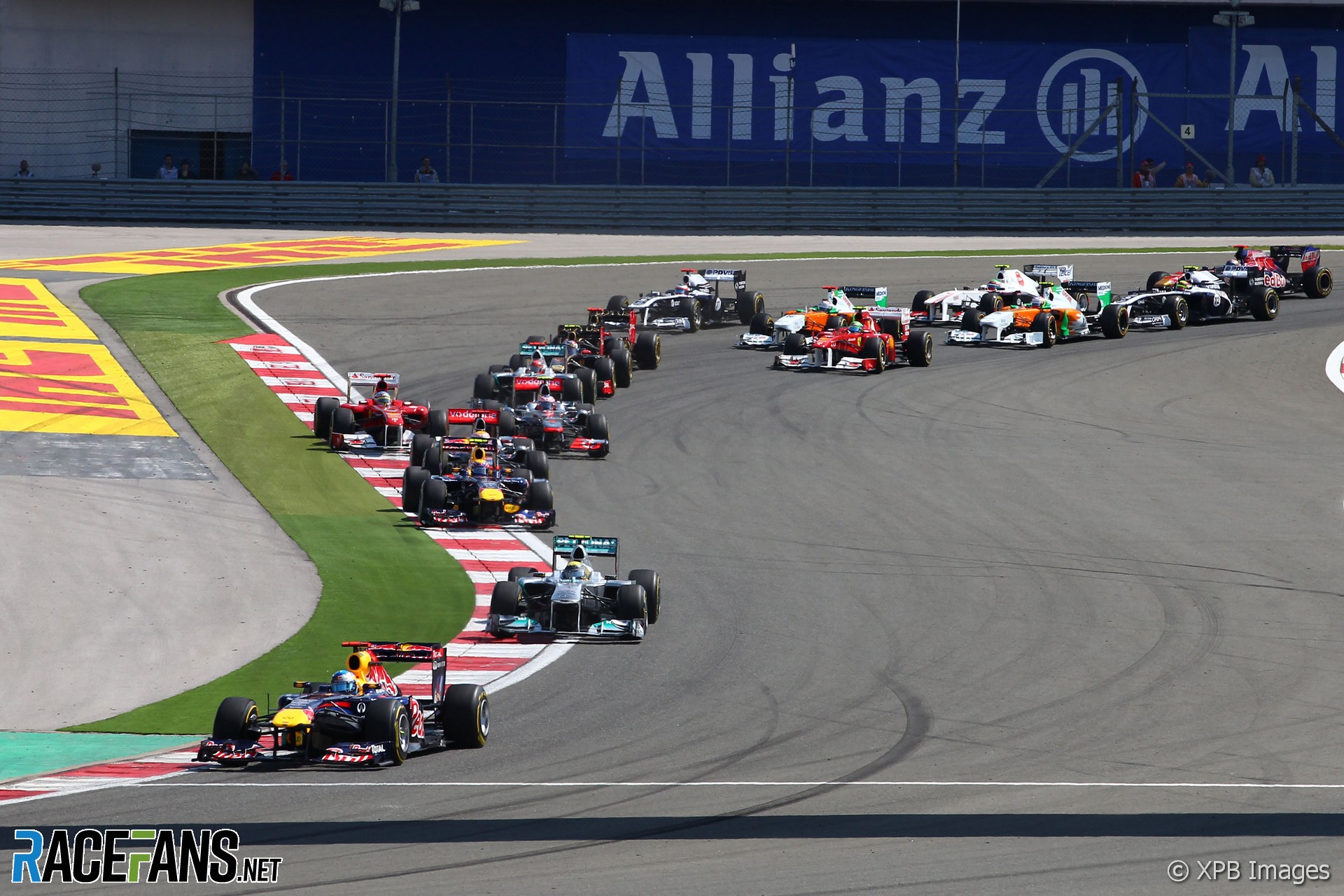 The Red Bull driver led almost every lap while team mate Mark Webber recovered second place to make it a one-two for the team.

Webber fell by Nico Rosberg at the start of the race but the Mercedes driver was powerless to keep drivers behind him early on.

But Webber came under pressure from Alonso who was quicker in the third stint and passed the Red Bull driver. Webber was able to reverse the move later in the race.

Lewis Hamilton had an eventful run to fourth. He tried to repeat his 2010 move of overtaking around a Red Bull the outside of turn four on the first lap – this time it was Webber.

It didn’t work, and he fell behind Alonso and Jenson Button. That began a fierce battle between the two McLaren drivers.

Hamilton twice got past Button using DRS but Button was able to re-pass his team mate on the start/finish line. Then Hamilton’s tyres started to go off and Felipe Massa overtook him.

McLaren quickly fixed the problem for him, however. Hamilton and Massa came into the pits together and McLaren got Hamilton out before the Ferrari.

But his third visit to the pits did not go so smoothly. The mechanic on the right-front wheel couldn’t get the tyre changed and he lost over ten seconds.

While Hamilton committed to a four-stop strategy, team mate Button tried to get through on three.

Button found himself stuck behind Massa for several laps in the middle of the race. He finally made it past at turn 12, while Massa locked his tyres and had to head for the pits.

Button came out of the pits for the final time on lap 39, aiming to complete the final 19 laps without a stop. He did, but he couldn’t keep Hamilton and Rosberg from dropping him to sixth, and Nick Heidfeld was bearing down on him when the chequered flag came out.

Only two other driver in the top ten finished the race with three stops instead of four. One was Sebastien Buemi, who finished ninth behind the delayed Vitaly Petrov.

The other was Kamui Kobayashi, who recovered from starting last to clinch the final point.

Petrov and Heidfeld had a wheel-banging matched in turn 13 earlier in the race. Petrov also came to blows with Michael Schumacher, who clipped the Renault as the Russian driver passed him on lap two.

It was the prelude to a desperate race for Schumacher, who ended the race 12th behind Massa. The Ferrari driver passed the Mercedes twice, having been delayed by a slow pit stop and ging off on the marbles at turn eight.

Sergio Perez lost his front wing in the mayhem of the first lap but made his way back up to finish 13th.

The racing further down the order was just as frantic as it was at the front, with multiple changes of positions at turn 12 aided by the Drag Reduction System.

Vettel even had to back off as he arrived to lap Perez and Adrian Sutil who were swapping places at turn 12.

Rubens Barrichello ran in the top ten early on but fell to 15th at the end in front of Jaime Alguersuari and Pastor Maldonado.

Jarno Trulli finished the race 11 seconds behind the other Williams, with Heikki Kovalainen, Jerome d’Ambrosio, Narain Karthikeyan and Vitantonio Liuzzi behind.

Paul di Resta was the only driver to drop out during the race with an unspecified car problem, while Timo Glock didn’t make the start with a gearbox problem.

Vettel strengthens his position in the drivers’ championship and Red Bull celebrate a one-two finish two months after their nightmare race at the same venue.

The resurgent Alonso showed the team can still be caught. But they’ll need to do it soon before Vettel runs away with the championship.