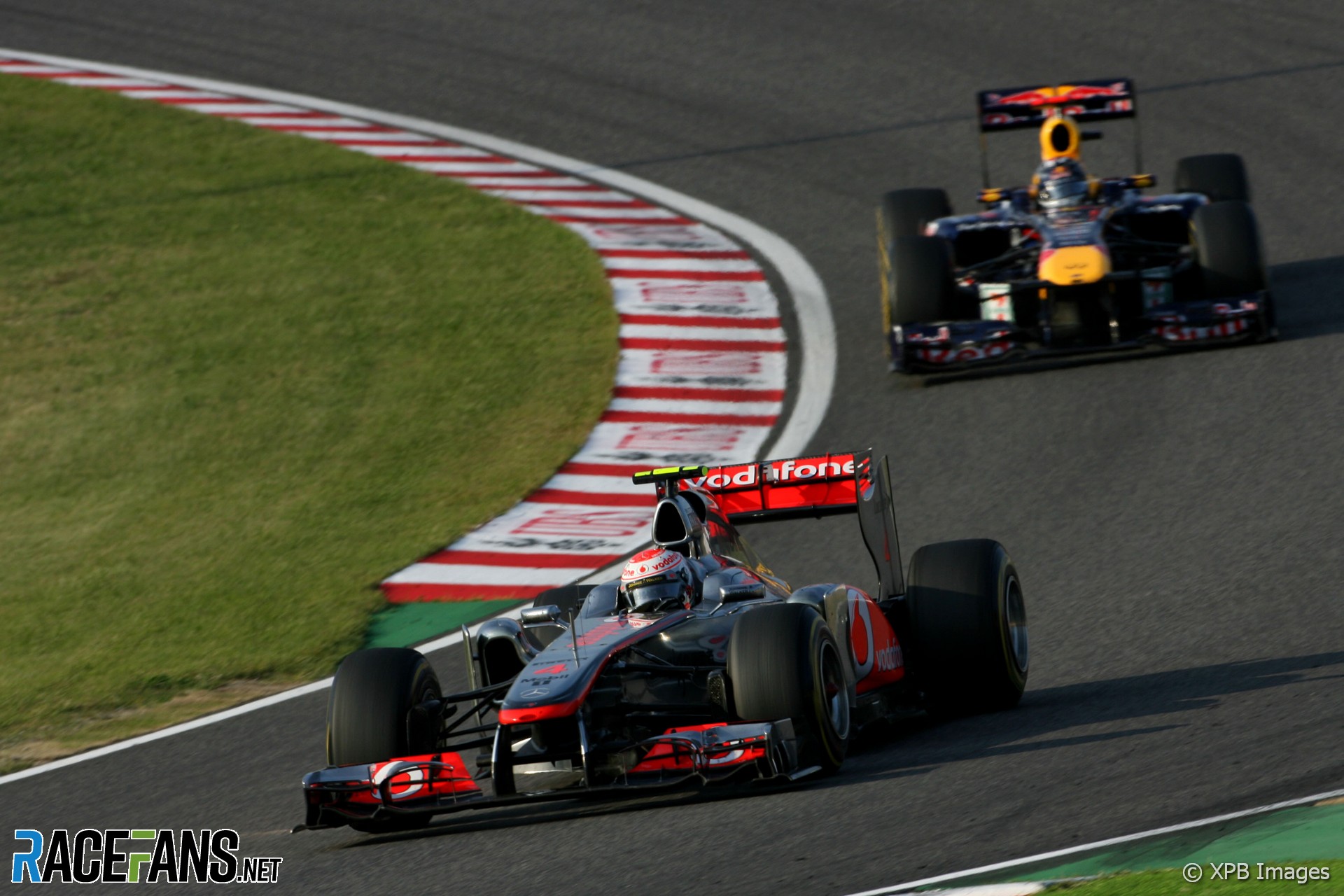 Jenson Button won his third race of the year but it wasn’t enough to keep Sebastian Vettel from securing the drivers championship title.

Vettel came home in third place having led the opening stages of the race. He and Fernando Alonso were bearing down on Button in the closing stages but the McLaren driver held on to win.

The race began with a wheel-to-wheel exchange between Vettel and Button as the latter made a better start from second on the grid.

He attempted to draw alongside Vettel but the Red Bull driver covered the inside line and as the track narrowed Button had to abandon the move. He was instantly on the radio to protest.

The stewards duly investigated but found nothing wrong with Vettel’s driving, which had not exceeded the limits of defensive driving that have been allowed before at the start of races.

Lewis Hamilton took advantage of his team mate’s delay to take second place. Behind them Massa, Alonso and Webber continued in the order they’d qualified.

But within nine laps Hamilton was struggling for grip. He ran wide at Spoon curve and Button was instantly through into second place. Alonso hounded the McLaren as Hamilton dived for the pits.

Vettel pitted on the following lap, sacrificing a five-second margin over Button. The McLaren driver was on on the next lap, and returned to the circuit having taken a couple of second out of Vettel’s lead.

Alonso came it at the same time and returned to the pits ahead of Hamilton. The McLaren driver was now under pressure from the other Ferrari of Felipe Massa who pitted on lap 12. Webber joined them, the trio covered by just over a second-and-a-half by lap 16.

Six laps later Massa pulled alongside Hamilton on the outside as they headed towards the chicane. Hamilton kept moving left and squeezed the Ferrari, plucking a vane off its front wing.

“I can’t see anything out of my mirrors,” admitted Hamilton afterwards. Fortunately for him the stewards chose not to hand down a penalty after investigating the contact.

Button caught Vettel briefly at the beginning of the second stint, the gap briefly stabilised, but as the stint wore on Button began to make progress again.

On lap 20 Vettel suddenly appeared in the pits again. Button reeled off a speedy in-lap, came in on the next tour, and got to turn one before the Red Bull arrived on the scene.

Despite following his team mate into the pits Webber was able to leapfrog the battling Hamilton and Massa with his stop. Massa also jumped past Hamilton after pitting on lap 23.

The order at the front was now Button, Vettel, Alonso, Webber, Massa and Hamilton. Race control summoned the safety car onto the track while marshals salvaged he remains of Massa’s front wing plus some other debris at the Dunlop curve from contact between Webber and Michael Schumacher.

Button toyed with Vettel at the restart, inally making a break for it just before they reached the chicane. He kept his lead and Vettel now came under pressure from Alonso.

Vettel was struggling to make his soft tyres last – six laps after the safety car came in he was back in to switch from soft to medium tyres, his team reminding him they had to last until the end of the race.

Button and Alonso’s rubber was lasting longer, and the Ferrari driver leapfrogged Vettel at his final pit stop, pushing the Red Bull down to third.

Vettel only needed tenth place to win the championship, but he went after Alonso as if the title depended on it, drawing alongside the Ferrari at turn one on the outside when using his DRS.

As the laps ticked down and the championship conclusion came into focus, his team urged caution, particularly after an agitated encounter with a lapped car who didn’t get out of the way quickly enough for him.

Alonso took advantage of Vettel’s delay to break out of DRS range and go after Button. He took a second out of the McLaren on lap 46 to pull within four seconds of the leader. By lap 50, the gap was a little over a second-and-a-half and the next time by Alonso had it down to a second.

Now Button responded, using a little performance he had kept in reserve to edge out out a few tenths of a second over his pursuers. At the chequered flag, Button crossed the line with Alonso and Vettel within two seconds of him.

Webber crossed the line in fourth in front of Hamilton, whose race had improved in the final stint as he put passes on Massa and Nico Rosberg to make progress.

Schumacher briefly led the race – the first time for him since this race five years ago – and took advantage of Massa being delayed by Rosberg to come out of the pits in front of the Ferrari.

Rosberg salvaged a point for tenth after starting 23rd, and his team mate is now just three points behind him in the championship.

Between them were Massa, Sergio Perez and Vitaly Petrov. Perez drove a fine race despite being unwell to claim eighth place.

The Force India pair slipped out of the top ten towards the end of the race despite Sutil putting an excellent move on Kamui Kobayasho at 130R earlier on. The home driver could only manage 13th after a poor start to the race.

The sole retirement of the race was Sebastien Buemi’s Toro Rosso, which shed a wheel following his pit stop on lap 12.

Button paid tribute to the new world champion after his win, saying Vettel “totally deserved his world championship” – and adding that it made it all the sweeter to beat him on a true driver’s track like Suzuka.

Vettel did more than enough to clinch the championship and did so in emphatic fashion, putting a lock on his second title with four races to go.

But he admitted afterwards he wanted the race to keep going: “To be honest I wasn’t thinking about the championship at all.

“I lost a bit of the connection to Fernando and it was difficult to get back again. And when I saw we were closing in on Jenson I thought ‘this is going to be fun the last laps’ and I was as hungry as I ever have been. I’d love the race to continue a little it more.”