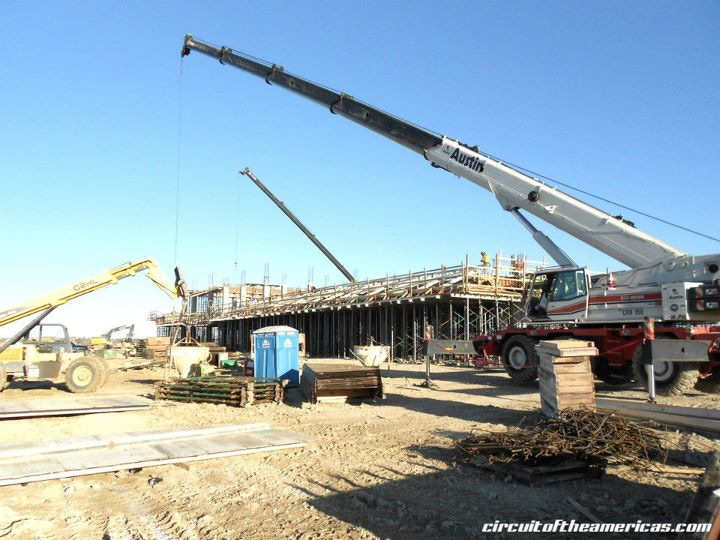 In the round-up: The Circuit of the Americas shows signs of progress.

Pictures of construction at the Circuit of the Americas including the pit building.

“The AT&T logos have disappeared from Williams’ website and their Facebook group has been renamed as well.”

The story of Budkowski, McLaren and Ferrari (F1Enigma’s Insider Notebook)

“He is indeed in a career break or sabbatical, but he isn?óŌé¼Ōäót going to Ferrari.”

“As a team we all learned a lesson from [the Canadian Grand Prix], and I kick myself that we didn’t take enough action in critical parts ?óŌé¼ŌĒ£ as we could probably have done a bit more under the red flag, we could have said more about Jenson [Button’] progress in those last few laps. It is those little things that you have to try and learn from.”

Williams relish the joy of six in driver hunt (The Sun)

“Force India reject Adrian Sutil is favourite to land the drive, although he faces competition from ousted Toro Rosso pair Jaime Alguersuari and Sebastien Buemi, Renault cast-off Bruno Senna and HRT struggler [Vitantonio] Liuzzi. And it is still possible Williams may opt to retain Rubens Barrichello for what would be his 20th season in Formula 1.”

“Despite the most dangerous dangerous journey to work, it was mega to to see the boys building the new car! The quality of carbon is amazing! And this year we have KERS! Can’t wait for testing! Mood in the factory is very positive, lots of busy people!”

“Former Formula 1 driver Norberto Fontana was already a hero in his native Argentina. Now he is tackling the Dakar Rally on home soil and his fan club is growing even bigger.”

Pressure for Vettel will come in a different way: Champion?óŌé¼Ōäós Pressure.

When Ayrton Senna won in 1988 he was against an established team-mate and double champion, in that sense Alain Prost had proven his greatness time and again. Senna had to prove his greatness and duly delivered. When Lewis Hamilton arrived it was the same idea.

The media and fans know all about you when you are a champion and no longer can blame inexperience and political naivety. Had Vettel been strongly tested from the first lap in 2011, maybe things would be different, but, now he knows he has the abilities to eke out extra performance when he needs it most. The problem will arise when his extra performance no longer brings results and he must continue knowing he can only manage third for a few races and is behind in the championship.

My opinion: We only have had 32 champions, I think Vettel is comfortably within the top 15 even if his career falters. If he can win in a car that is noticeably inferior, as all greats have, in normal circumstances and challenge the two golden boys of this era in top (even equal) machinery, then we may well be witnessing one of the greatest drivers ever.
RBAlonso

Ferrari dropped race strategist Chris Dyer one year ago today, in the wake of Fernando Alonso’s championship defeat in the final round of the 2010 season.

74 comments on “Construction continues at Circuit of the Americas”