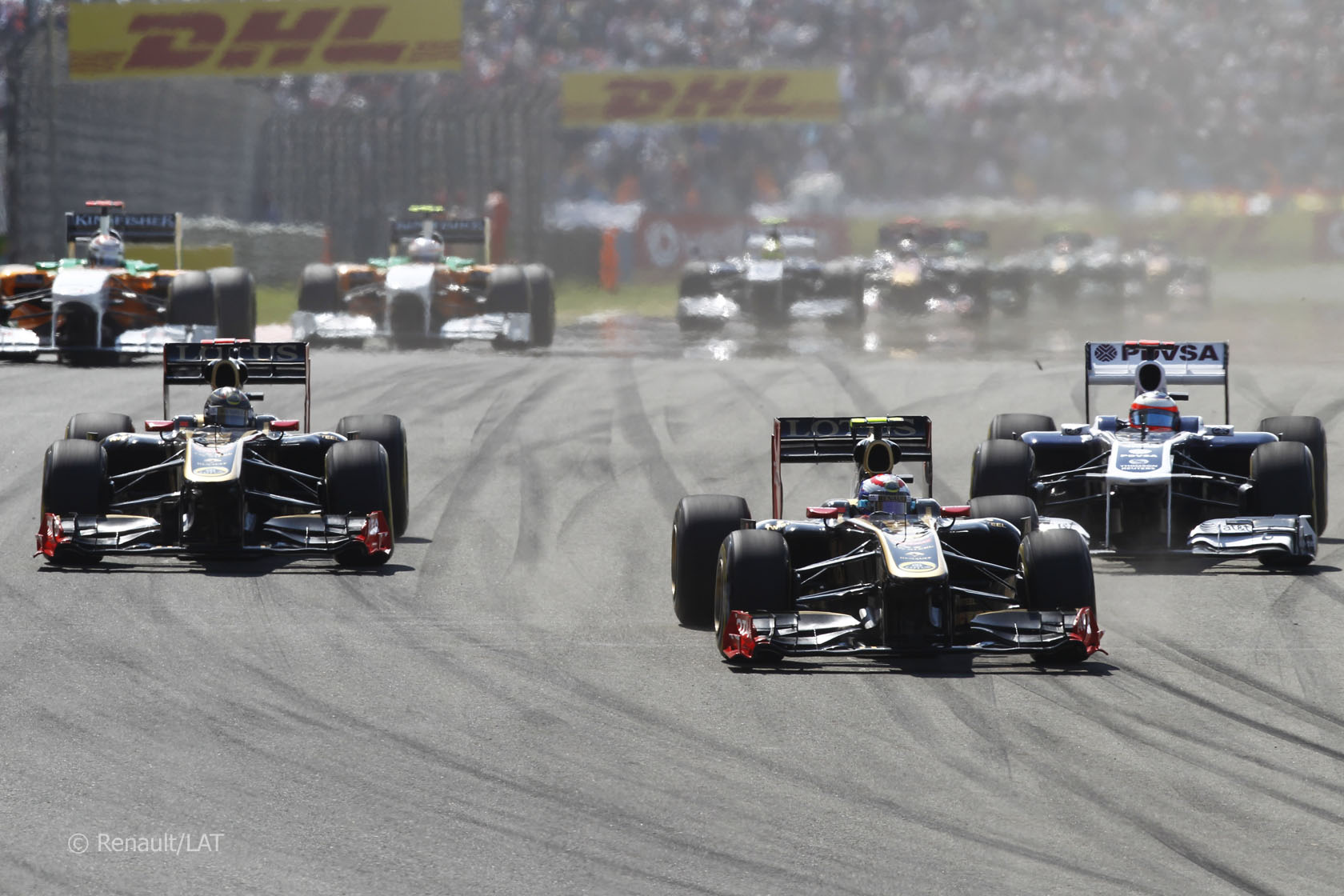 The list of 2012 F1 drivers and teams shows there are just two places left to fill for the season ahead.

So, who should get the last remaining F1 drives for 2012?

Make your pick from the most likely candidates below.

Sutil had a strong end to 2011. But Force India decided before the end of the year to promote Nico Hulkenberg, which ultimately squeezed Sutil out of the team.

He is the highest-scoring driver of 2011 who does not currently have a seat for this year.

Senna had a mixed half-season for Renault with some good qualifying performances but a few errors in races and more than his fair share of technical glitches.

On the whole he acquitted himself despite having little testing time, but wasn’t able to keep his seat as the team brought in Kimi Raikkonen and promoted Romain Grosjean. Rumours have linked him to a place at Williams.

There was considerable surprise when Toro Rosso announced they were dropping not one but both of their drivers at the end of last year. Alguersuari may only be 21 but already has two-and-a-half years of F1 under his belt.

For the second year in a row Virgin brought a rookie in and dropped him at the end of the year. Like Lucas di Grassi before him, D’Ambrosio is now looking for a seat with another team.

The first ever Indian Grand Prix weekend saw two local drivers in action but neither of them have race seats for 2012 so far. Chandhok only started one race last year and it didn’t go very well – he had several spins and finished two laps behind team mate Heikki Kovalainen.

After making a surprise return to F1 at the beginning of 2011, Karthikeyan found himself out of a drive halfway through the season. He made a one-off return in the Indian Grand Prix, but it remains to be seen whether HRT will invite him back again this year.

Heidfeld has made comeback appearances in the last two seasons – with Sauber in 2010 and Renault last year.

But he dropped halfway through last year after his performance as Robert Kubica’s substitute was found wanting.

Will F1’s most experienced driver of all time get a record 20th season in the cockpit? Barrichello had an unspectacular 2011 driving the dismal FW33, but recent management changes at Williams may have boosted his chances of retaining his seat.

Despite being dropped from the Toro Rosso line-up, Buemi is remaining within the Red Bull fold as a reserve driver, so it’s unlikely he’ll be racing elsewhere in F1 this year.

All three drivers who raced for Renault in 2011 are without seats at the moment. Of the trio, Petrov scored the most points, but he was the only one to start a full season.

Liuzzi had a second chance at F1 with Force India, but after being dropped by the team ended up in an HRT last year. There remains a vacant place at the team for next year alongside Pedro de la Rosa.

Luca Filippi was one of the most impressive drivers in GP2 last year, but after six years in the category (he made his debut same year Lewis Hamilton did) it seems there aren’t any F1 teams taking an interest.

Filippi beat Jules Bianchi by a single point and although Ferrari would like to get their development driver some more F1 experience there aren’t many likely opportunities for him. Giedo van der Garde finished fifth in his third year in the category and has had a few F1 tests in the past but nothing in recent years.

Robert Wickens beat Jean-Eric Vergne to the Formula Renault 3.5 championship last year and tested for Virgin and Renault at Abu Dhabi in November.

Since being dropped by Virgin in 2010 Lucas di Grassi has accumulated significant testing mileage for Pirelli. Sakon Yamamoto and Christian Klien also last raced in 2010.

Vote for your choices

Which two drivers should get the last two places in F1 for 2012? Make your selection from the list below and have your say in the comments.

Which two drivers should get the last F1 seats for 2012?

NB. Robert Kubica does not have a seat for 2012 due to injury.