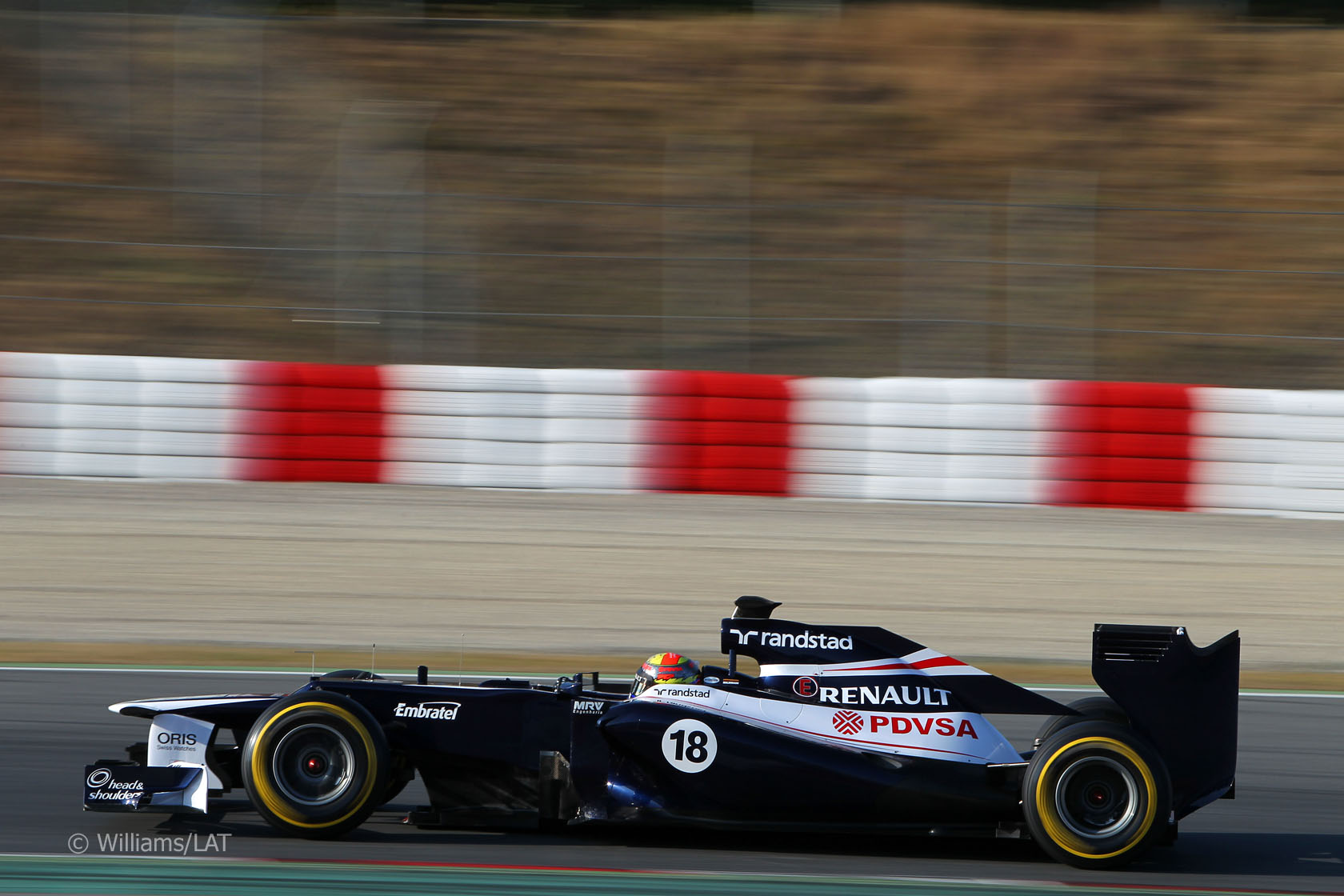 But as the team fall further towards the back of the field, and wheel out another dark blue car with worrying expanses of blank space, it’s hard to avoid such comparisons.

Even the blunt face of the stepped nose on the FW34 brings to mind the bluff front of the Tyrrell 012.

Are Williams inevitably heading towards the same fate as Tyrrell – or will this be the year they hit back?

Williams’ driver line-up might be considered the battle of the pay-drivers by some, but this view sells both drivers short.

Yes, they both bring sponsorship, but both also have junior category CVs which endorse their ability to compete at this level: Pastor Maldonado won the GP2 championship in 2010.

In his first season of F1 last year he often qualified well but had a tendency towards getting caught up in incidents. He ran especially strongly in Monaco – always a good circuit for him – before clashing with Lewis Hamilton.

But there won’t be any room for such lapses if the FW34 proves capable of consistently challenging for points.

Bruno Senna has taken over from the highly experienced Rubens Barrichello and, like Maldonado before him, he has been charged by some with paying his way instead of earning the seat on merit.

But Senna, too, has proven he’s worthy of racing in the top flight.

He finished runner-up to the highly-experienced Giorgio Pantano in GP2 in 2008 – an achievement which should be viewed in the context of having spent almost a decade out of competition following the death of his uncle Ayrton in 1994. While his racing peers were karting and moving up into single-seaters, Senna was out of action until 2003.

His F1 career so far has consisted of a near-full season in the hopeless HRT, followed by a mixed bag of appearances for Renault last year.

At his best, Senna was quick in qualifying and raced well, and showed he has potential if he can cut out the mistakes.

Last year was an unmitigated disaster for Williams: three top-ten finishes was all the team had to show for their efforts in 2011.

They responded with root-and-branch change for this season: former technical director Sam Michael has left along with aerodynamicist Jon Tomlinson.

Mike Coughlan took over in charge of the FW34 along with fellow new hires Mark Gillan and Jamson Somerville.

Patrick Head has ended his day-to-day duties at the team. Frank Williams has stepped down from the board of his own team – a move that is emblematic of the extent of the changes sweeping one of F1’s most successful constructors.

They’ve also switched engine suppliers, dropping Cosworth power for Renault – the company they enjoyed such success with in the nineties. Although the previous engine was believed to be giving little away in terms of power, the Renault is expected to offer other advantages.

In particular, its compact dimensions have allowed the designers to tighten up the rear of the car. That, along with the latest version of the low, small gearbox the team developed last year, will aid airflow to the lower part of the rear wing.

But it wasn’t just performance the team lacked in 2011. Reliability was lacking too – another area they will have to improve on to compete with the likes of Toro Rosso and Sauber.

And as they struggle to keep the midfield in view they may have to keep one eye on their mirrors to spot the ever-improving Caterham moving up quickly behind them.

Can Williams improve on their ninth place in last year’s championship? Is the time about to stage a recovery – or slip further back?

have your say in the comments.