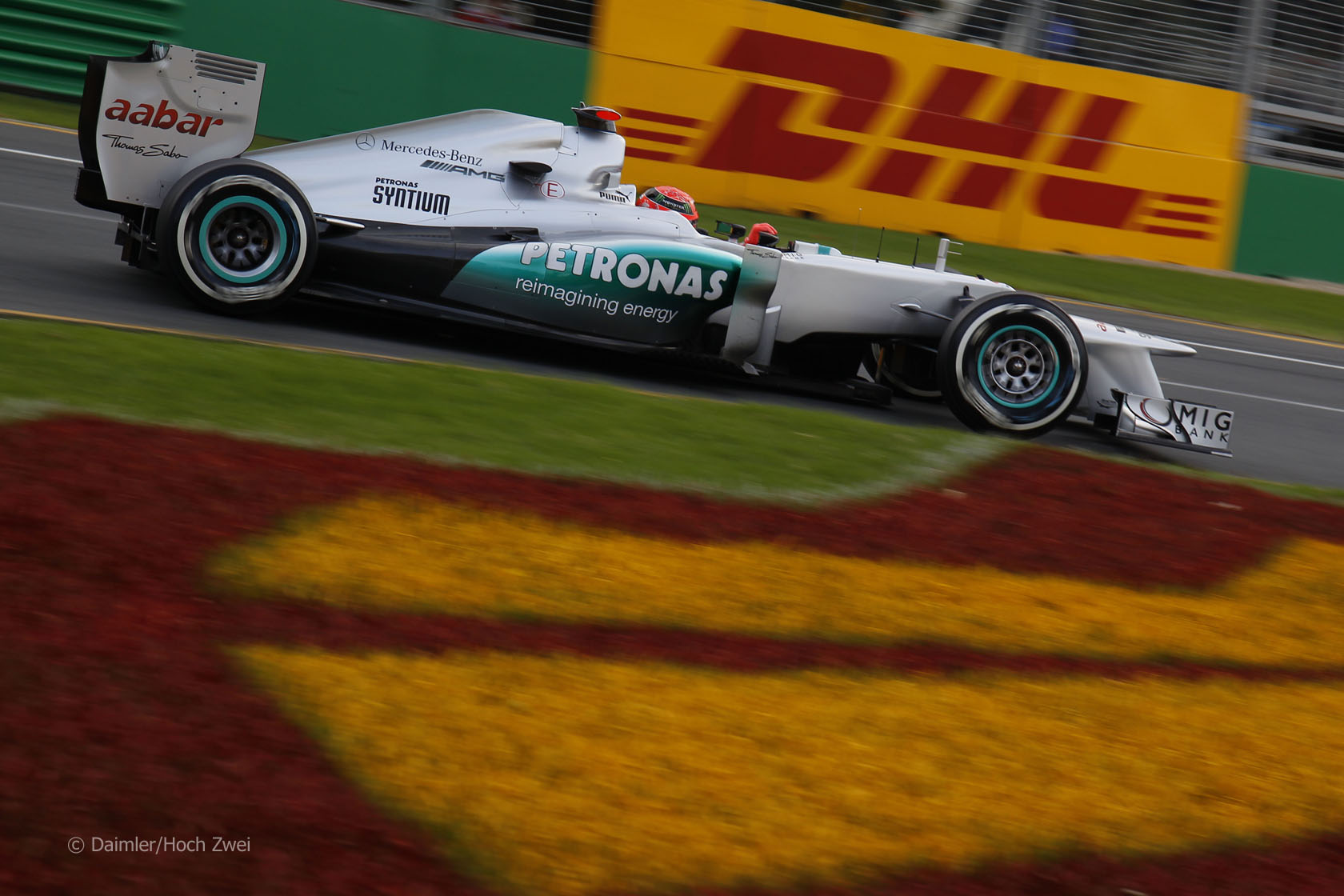 In the round-up: McLaren say they will “rely on the FIA” to rule on Mercedes’ controversial wing design.

McLaren managing director Jonathan Neale: “Mercedes were very quick during qualifying and there is enough YouTube footage of Michael [Schumacher] being very defensive about photographs of the car. But I think we have to rely on the FIA [to make the correct ruling].”

“BSkyB has denied the decision by its chief executive to order a story to be removed from the Sky News website for 40 hours after a complaint from its Formula One production team posed a threat to the channel’s editorial independence. Jeremy Darroch stepped in after the article, posted on the Sky News website at 6pm on Saturday, caused F1 teams in Melbourne to voice concern to BSkyB’s TV production team, who were in the city covering the inaugural race of the 2012 season.”

“The polite fiction is that the private equity group has a ‘controlling’ stake in F1, acquired for an estimated ?é?ú1.1bn in 2006. But whatever the shareholders?óÔéĽÔäó register shows, only one man yanks the strings of all the other alpha males involved in this testosterone-saturated contest ?óÔéĽÔÇŁ Mr Ecclestone, the long-standing chief executive.”

Mercedes not keen on Formula One budget cap (The Independent)

Ross Brawn: “As you know we’ve been strong supporters of the RRA, which we think is the intelligent budget cap. We’re still very strong supporters and that’s what I’d like to see going forward, and we’re working with the teams and the FIA to see if we can find further solutions to a resource restriction.”

“To minimise its tendency to force the tyre to pull sharply sideways when encountering a bump during cornering load, it needs to be set up with negative camber (wheels pointing outwards at the bottom) so that the cornering pulls the wheel upright. That cures the pull-rod geometry’s sensitivity to bumps but introduces a different problem – instability under braking because when travelling in a straight line the tyre does not have its full tread surface in contact with the track.”

“Their respective body language afterwards was striking; Lewis looking stony-faced on the podium. He said all the right things, congratulating Jenson on his performance and thanking McLaren for building a winning car, but he looked and sounded devastated.”

Nico Rosberg: “I also thought he was crazy!” (Adam Cooper)

“[Sergio Perez] complained about me? So maybe it?óÔéĽÔäós nobody?óÔéĽÔäós fault, because I also thought he was crazy! Maybe it?óÔéĽÔäós just a racing incident, and we have to see on the video. It?óÔéĽÔäós a very unfortunate incident.”

Red Bull Made Most Of Challenging Opener (Speed)

Christian Horner: “Malaysia is a considerably different prospect to here. Here it?óÔéĽÔäós short turns, it?óÔéĽÔäós bumpy, there are not a lot of high-speed corners here. Malaysia offers that variance. So I think it will be interesting to see. We expect them [McLaren] to be quick in Malaysia, as well, but hopefully we will be in better shape there than we certainly were here in qualifying.”

“Last year people thought that with the hard tyres only Red Bull and McLaren got them to work and get them in temperature, whereas this year the hard tyre is softer, like the medium tyres from last year, and the teams are saying that they can get them working within one lap. So when we get to a race like Malaysia this will be a huge challenge for us, with the choice of compounds for a track with up to 50 to 60 degrees Celsius on the tarmac and a very abrasive circuit.”

I think I’ve watched f1 long enough to know there is a lot more to this sport than supposedly having the same car as your team mate. Massa’s car on Sunday looked horrendous. Comparing drivers is sometimes very difficult when you don’t know what is going on behind the scenes.

Look at Button at Benetton he clearly wasn’t happy and he was trounced by Fisichella, but look at him now. Don’t write Felipe off, his talent is still there he just needs the environment to prove it. Sadly I don’t think its in the shadow of Alonso.
DMC

The race, held in very hot conditions at the Jacarepagua circuit, saw Nelson Piquet and Keke Rosberg finish first and second. Piquet collapsed on the podium due to the physical effort of driving the punishing ground effect cars around a high-speed circuit in high temperatures.

But after the race Piquet and Rosberg were thrown out as the FIA decided their cars were underweight. Their teams, Brabham and Williams, had taken advantage of rules allowed the cars to be topped up with water to run them below the minimum weight level.

Here’s a long video of the race with footage from various sources: