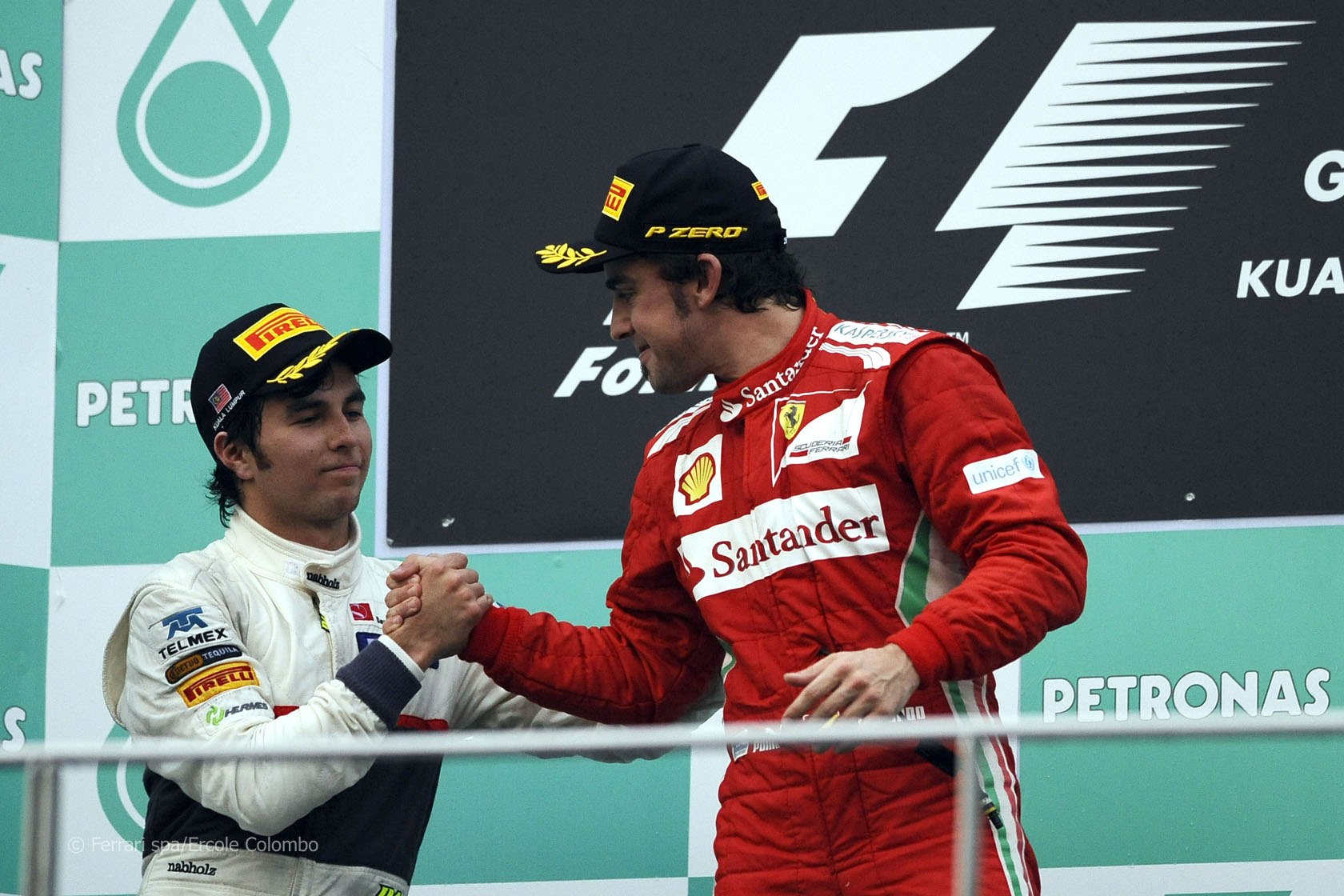 He triumphed under pressure not from one of the five other world champions on the grid – but emerging talent Sergio Perez, who chased the Ferrari down in the second half of the race.

Perez ultimately had to settle for second ahead of pole sitter Lewis Hamilton.

The rain fell lightly to begin with, beginning before the start of the race and leading most drivers to start the race on intermediate tyres.

When the lights went out, both McLarens made clean starts, pulling away from the second row quickly. Hamilton carefully protected the inside line, anxious not to lose the lead to Button again, and held his position.

Behind them Romain Grosjean squeezed past Michael Schumacher and Mark Webber to take third place. But they attacked him again at turn four and as Schumacher went around the lotus Grosjean clipped him, sending both into a spin.

That allowed Sebastian Vettel up into fourth place ahead of Fernando Alonso.

The rain increased in intensity during the first laps, leading some drivers to switch to full wet weather tyres. Sergio Perez aborted a pass on Nico Rosberg as he dived into the pits, followed by Bruno Senna.

As Hamilton edged away from Button and the Red Bull, Paul di Resta made for the pits on the next lap. Felipe Massa and the Marussias ducked in on the following tour as conditions worsened.

By now the race leaders were considering their options. The top four were spaced apart by around two seconds, but Vettel now had Alonso close behind him.

McLaren radioed Hamilton and asked his opinion on the conditions: “The rain is getting heavier but it’s OK,” he replied. “The car is aquaplaning in places, but it’s OK.”

Behind him Button didn’t share that assessment, and decided to change to wet weather tyres. This was reminiscent of Hungary last year, when Button stayed out as Hamilton, ahead of him, made a costly switch to intermediate tyres.

Once again Button’s call was probably the correct one – but it wasn’t enough to get him in the lead. Hamilton, who had asked his team about Vettel’s strategy, was told: “Jenson has just pitted, but the Red Bulls are still on inters.”

“Other cars are going faster on full wets. We think we should box this lap,” added McLaren. Hamilton duly came in, left on full wets and came out just in front of his team mate.

The Red Bulls came in on the same lap as Hamilton, Vettel emerging from the pits behind Alonso. And all three of them were now behind Perez, whose early switch to full wet tyres had paid off handsomely. But with the rain coming down ever harder, even the drivers on full wet tyres were struggling to keep their cars on the track. Perez ran wide at turn nine, then came off completely at turn 12, but kept going.

Rosberg and Vettel were among those who went off as a thunderstorm hit the track and water flooded the track in places. Race control summoned the safety car, and the red flag followed shortly afterwards.

Despite the downpour, the only retirement before the race was stopped was Grosjean, who spun into a gravel trap on lap five. The cars lined up on the grid with Perez behind the McLarens, followed by Webber, Alonso and Vettel.

Remarkably, Jean-Eric Vergne had kept his car on the track despite staying on intermediates and was up to seventh ahead of Massa and Rosberg.

Even more of a surprise was Narain Karthikeyan’s HRT in tenth place. The team had gambled starting the race on full wet tyres, but his team mate Pedro de la Rosa had started from the pits.

The race was eventually restarted behind the safety car on lap ten, and after four laps of touring around the field were unleashed. Button, who’d asked, “is there a reason why the Safety Car is still out? The circuit is definitely ready”, was first in for intermediate tyres.

Hamilton kept his lead while Perez moved up to second. Behind him, Alonso and Vettel pounced on Webber, who struggled to get his tyres working straight after the restart, but Webber managed to re-pass his team mate.

Massa passed Vergne – who’d made a mandatory switch to full wet tyres for the restart – and was now behind Vettel, but not close enough to pass the Red Bull when he ran wide at turn seven.

Alonso moves ahead in the pits

The track was clearly ready for intermediates and rest of the front runners were quickly in to change. Hamilton lost time as his pit crew fumbled to attach the rear jack to his car, and had to be held in his box while other cars came past.

He emerged from the pits behind Button while Alonso, thanks to another rapid pit stop by Ferrari, leapfrogged the pair of them then passed Perez to take the lead.

Button’s hopes of a second consecutive win were dashed when he clipped Karthikeyan – who he was racing for position – at turn eight. He damaged the front wing on the McLaren and sank to the back of the field following another pit stop.

From there matters got worse, and Button was soon in for another set of intermediates as he couldn’t get the first set up to operating temperature.

Alonso quickly drew away from Perez and had a 4.1 second lead by lap 21. Hamilton couldn’t do anything about the pair ahead and was already 6.5s behind and dropping further back.

Rosberg was falling back at an even faster rate, the Mercedes clearly no kinder to its intermediates than it had been to its slicks in Australia. He was picked off by Vettel and Raikkonen on the main straight after DRS had been enabled, and then Webber came around the outside of him at turn five.

Massa would have been next to catch him but the Ferrari driver ran wide at turn eight and was passed by Paul di Resta. Jean-Eric Vergne also attacked the Ferrari and claimed the place in the DRS zone.

Bruno Senna was next to try it on and was making his way past as Massa surrendered to the inevitable and headed back to the pits.

As they passed half race distance Alonso’s lead was up to 7.7 seconds over Perez, with Hamilton a further seven behind. Free of Rosberg, Vettel and Raikkonen were now lapping close to the leaders’ pace.

But as the intermediate tyres wore down, the balance of power tipped away from Alonso and towards Perez. The Sauber driver began edging tenths out of Alonso’s lead and by lap 34 had the gap down to 5.7 seconds.

The skies were becoming more overcast and twitchy race engineers warned drivers of another shower on its way. Meanwhile Perez was starting to take whole seconds out of Alonso’s lead on each tour: by lap 39 he had the Ferrari well in sight, the gap down to 2.3 seconds.

At this point Massa, who by now was well out of the points, switched to slick tyres. Ferrari noted the track was ready to accommodate the medium compound and duly brought Alonso in next time around.

On the next lap Alonso led the charge for the pits, joined by Vettel, Raikkonen, Vergne and Hulkenberg. Perez stayed out one lap longer and that proved costly: along with Ferrari’s superior speed in the pits, the gap ballooned to over seven seconds.

“We need this position” But Perez found the slicks to his liking and on his first flying lap tore 1.4 seconds out of Alonso’s advantage. As they became lap 48 Perez was within a second of the lead.

Whether Sauber were mindful of Maldonado’s demise chasing Alonso in Melbourne, or the cost of their Ferrari engine contract, they decided to remind their driver of the value of finishing second just as Perez was poised to strike.

“Chceo, be careful, we need this position,” warned race engineer Marco Schupbach. Settling for second was not on Perez’s agenda: “I knew I had to get soon because I was already losing my front tyres,” he said afterwards.

But ambition ultimately overcame adhession when he asked too much from those front tyres at turn 13, and found himself running wide onto the wet run-off.

His chance of beating Alonso to the win died in that moment, though he resumed the chase to finish just 2.2 seconds behind the Ferrari.

For the second race in a row, Hamilton started on pole position and finished third. Behind him was Webber, as Vettel had picked up a puncture when he clipped an HRT while lapping it.

Vettel’s radio was not working properly and, in a confusion sequence of messages on the final lap, he was alternately told to pull over and stop, or to keep going. He was classified 11th.

Raikkonen took fifth ahead of Senna. Vergne claimed his first championship points in his second race, with Hulkenberg and Schumacher competing the top ten.

Button came home a distance 14th behind Ricciardo and Rosberg, having muscled past Massa who was 15th and just five seconds away from being lapped.

Timo Glock split the Caterhams of Vitaly Petrov and Heikki Kovalainen. A late failure dropped Maldonado out of the points – he was classified 19th ahead of Pic, Karthikeyan, and de la Rosa.

Perez’s team mate Kamui Kobayashi was one of only two retirements, joining Grosjean.

“Today the win was possible,” admitted Perez afterwards. But even so his second place is Sauber’s best ever result as an independent team.

Remarkably, Alonso now leads the drivers’ championship. He insisted afterwards that the win “changes nothing” for the team’s prospects – after all, they still have a car that’s only just able to scrape into Q3 in dry conditions.

But as a morale booster for the team he could hardly have asked for more. And for a driver who already has several great wins to his credit, this surely ranks as one of the best.