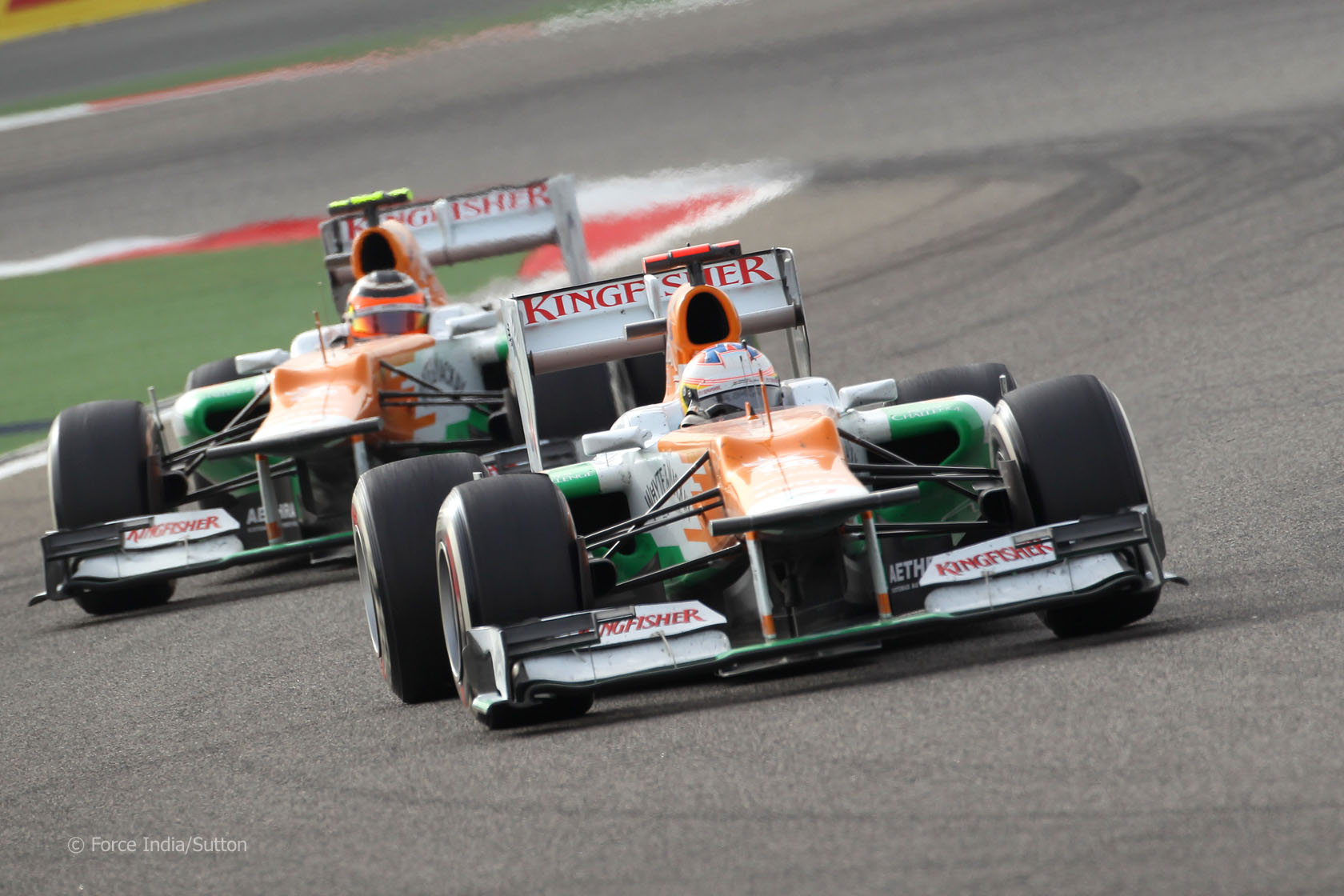 In the round-up: Paul di Resta says finishing sixth is a “massive achievement” for Force India.

Bahrain result was like a win for Force India, says Paul di Resta (The Guardian)

“Sixth position for us is a massive achievement, probably the same for us as Sebastian [Vettel] winning the race given the car we have.”

“I am pleased the weekend is over. There should be no real celebrations today.”

“Every single team boss and every single person I’ve spoken to in Formula 1 has said, ‘I tell you what, though: they shouldn’t have done that UniF1ed’ – not least because you’re not allowed to use Formula 1 for any political aims, and it’s difficult to see how they haven’t done that.”

Bahrain International Circuit chairman Zayed al Zayani: “I think we have proved to the world that whatever is happening on the political scene has nothing to do with what is happening on track.”

“It was a success for tear gas, attack dogs and brutality. This was a sporting event that should not have happened. That it did is to the shame of Bahrain and Formula One alike.”

Between a rock and a hard place (GP Week)

“Jean Todt received political support from Bahrain during his election, and his son Nicolas’ ART [Lotus GP] racing team is part-owned by Bahrain’s crown prince, who is also chairman of the F1 circuit. FOTA boss Martin Whitmarsh’s McLaren team is 40 percent owned by the Bahraini royals. With money and friends like that, it’s easy to turn a blind eye.”

“The three journalists had entered the Kingdom on tourism visas; covered local events without having obtained requisite prior permission; brought unlicensed equipment into the Kingdom; and took part in a non-peaceful and unlicensed demonstrations.”

IFJ president Jim Boumelha: “This selective approach to media accreditation is arbitrary and totally unacceptable. The authorities were only too happy to tout the return of the Grand Prix to Bahrain as a sign that the situation is normal. Yet, they deliberately set out to deny independent media to verify this claim on the ground.”

Bahrain is bewildered by the world?ů‘ťľ‘šůs hostility (The Telegraph)

Senior police adviser to the government of Bahrain John Yates: “The decision not to give visas to certain correspondents is one, as the Crown Prince said, that the government may wish to reflect upon. The death over the weekend of Salah Abbas al-Qattan, an anti-government protester, is also a powerful reminder of the tragic consequences of the unrest.”

Formula One dodged a bullet in Bahrain (The Globe and Mail)

“While Ecclestone told reporters after the session that the television coverage also missed two other drivers, that is simply not true. A review of the session clearly showed that every driver appeared on screen either in or out of the car, except for the Force India pairing.”

On the front line… at Starbucks (Joe Saward)

“All Formula 1 got from Bahrain was awful media coverage. It was universally negative. There are some, Bernie Ecclestone among them, who do not believe that there is such a thing as bad publicity. One should never forget that Bernie uses controversy on a regular basis to create interest in events.”

“Yet despite the crown prince’s hopes, doubts remain over whether Bahrain can use the F1 as a springboard to introduce reforms that can be built upon to create to an outward-looking economy.”

Formula One clouded by money and pollution (The Times, subscription required)

“Even life and death become trivial in the mind-altering world of F1. It is hardly surprising, then, that F1 made the ridiculous decision to race in Bahrain yesterday. Everyone could tell that nothing but trouble would come from it, and that F1 would be criticised everywhere in the world.”

“‘I would like to wish all the Formula One teams today the best of luck,’ King Hamad said in a message on Sunday before the race, ‘And thank you for showing your faith in our country by coming here.'”

“Amnesty International today condemned the delaying tactics of a Bahrain court – after the second postponement of an appeals hearing for 14 jailed activists – in light of the critical condition of prominent activist Addulhadi al-Khawaja, who is on his 75th day of a hunger strike. The human rights organisation said Bahrain is “toying” with al-Khawaja?ů‘ťľ‘šůs life and demanded his release, along with the other 13 activists.”

“Ecclestone has always claimed to have a long list of countries ‘queuing up to have a Grand Prix’. That being so, might it not be a sound idea to replace Bahrain with one where there is no need for armed personnel carriers around its circuit? He is quite wrong in his affirmation that ‘there is no such thing as bad publicity’: the fee from last weekend?ů‘ťľ‘šůs Grand Prix may have been hefty, but the damage to F1’s image incomparably greater still. Bernie himself may not care too much about that, but the manufacturers and sponsors of F1 will perhaps feel differently.”

Jenson Button: “Traditionally this year we’ve got two main strengths. Our starts and our race pace. Well, my start was terrible and the race pace just wasn’t there. There was just no real positive from the day.”

Lewis springs back into action (The Sun)

“I was not going to Mugello but that might change now. I need to get back in the car. We need to figure out why the tyres are going off.”

James Allison ?ů‘ťľ‘«£ “There is No Reason Why We Can?ů‘ťľ‘šůt Deliver Even Better Results” (Lotus)

“Kimi [Raikkonen] gave us a scare in the opening laps when he lost a place to a much slower Felipe [Massa] and in doing so also damaged his front wing. We could see from the data that this impact lost us some aerodynamic performance which Kimi then had to carry for the remainder of the race.”

“We are currently still investigating the failure mechanism and have brought back the damaged components for further analysis. In addition, we are studying the video footage as directly prior to the failure Vergne had contact with Pastor [Maldonado].”

Four different drivers set fastest lap in the first four races of 2009 but two were from the same team (Brawn). […]

Today in 2007 a company run by Bernie Ecclestone took a 15-year lease on the Istanbul Park circuit.

At the time this was seen as a move that would safeguard the future of the race, but the Turkish Grand Prix was dropped from the calendar at the end of last year.

61 comments on “‘Sixth place like a win’ for di Resta”