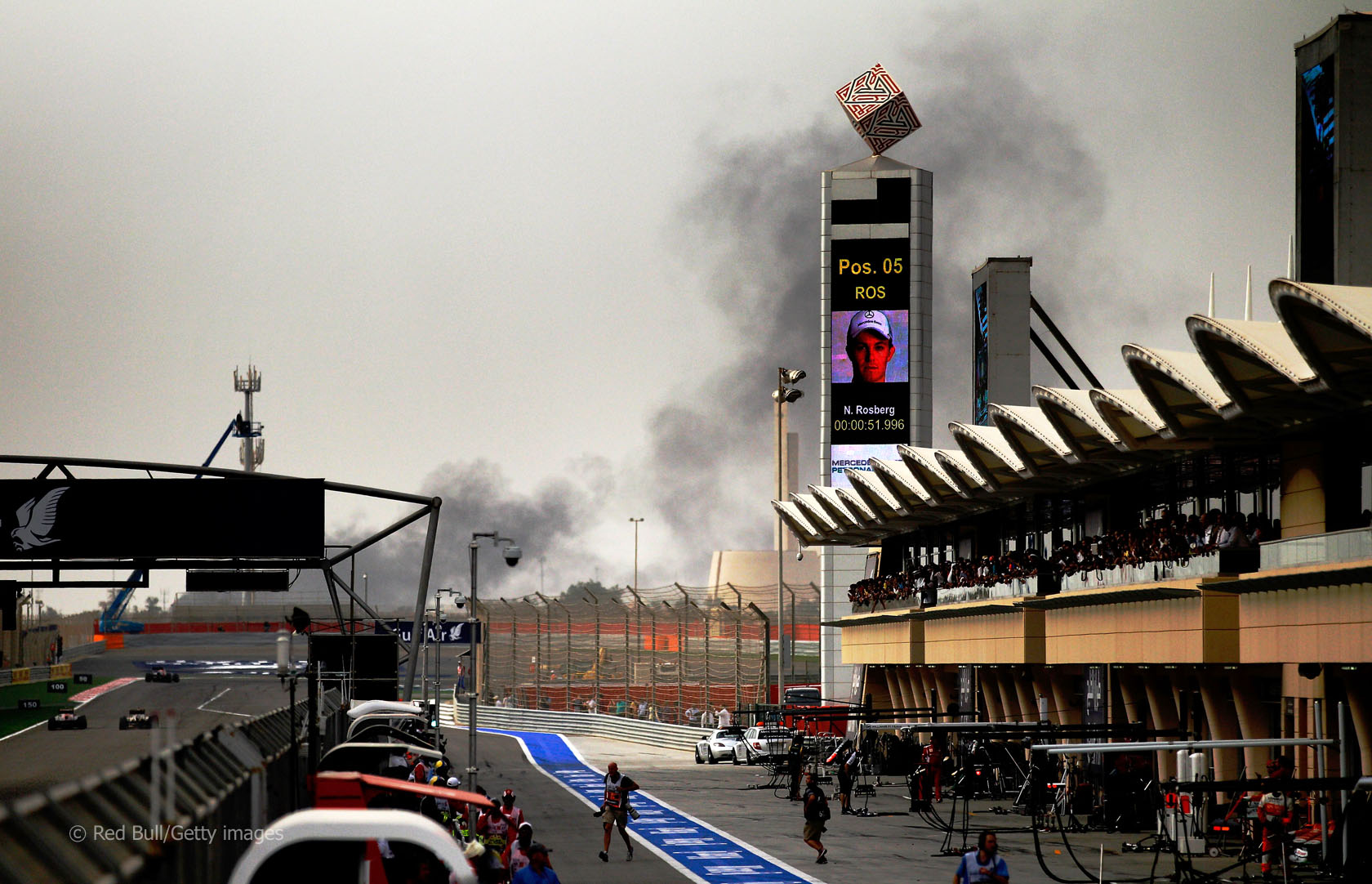 A selection of the ten best pictures from F1’s controversial weekend in Bahrain. F1’s presence in Bahrain was the subject of intense debate. Following the cancellation of last year’s Grand Prix due to the situation in the country, the organisers promoted the 2012 race under the politically provocative slogan “UniF1ed: One Nation in Celebration”. Lock-ups were a frequent sight in practice as drivers grappled with tyre degradation on the hot track.

After the race Michael Schumacher was critical of Pirelli’s tyres, telling reporters: “I’m not happy about the situation, let’s see what happens in future.

“If it was a one-off car issue, you could say it’s up to us to deal with it. But basically it is everybody, with maybe one or two exceptions, and if it is 80% of the field that has this problem, then maybe the tyre supplier should think about that.” A close-up of the cooling vents on McLaren’s MP4-27 – a vital feature given the high ambient temperatures in Bahrain.

The team had their worst race to date this season, bringing home just four points. They lost the lead in the constructors’ championship and Lewis Hamilton fell behind in the drivers’ title race. Daniel Ricciardo starred in qualifying, taking a career-best sixth on the grid. But he made a poor start and by lap two had fallen to 17th place. Not the sort of burning rubber you usually associate with motor racing – tyres were set ablaze by protesters, sending plumes of smoke into the sky during the race. Romain Grosjean made a superb start and passed Hamilton for second place on lap seven.

He went on to lead in his 11th F1 race and scored his first podium finish. A TV helicopter hovers behind Nico Hulkenberg’s car during the race. The disturbed air from his rear wing distorts the view of its tail.

But the cameras had seemed to overlook the two Force Indias during qualifying.

On Friday the team did not run during second practice. They did so in order to return home during daylight, after several team members were caught up in a petrol bomb attack while travelling from the circuit earlier in the week.

This prompted speculation that they were deliberately overlooked during Saturday’s coverage for breaking ranks with the other teams. Counter-claims that the FOM director had avoided showing the cars because of their alcohol sponsors were undermined when the VJM05s reappeared on TV screens during the race.

“Nobody cares if someone is ninth or eleventh,” said Bernie Ecclestone, when asked why the Force Indias had not been shown. Sebastian Vettel certainly did care about the person who started eleventh – because he appeared on his tail halfway through the race.

He came under serious pressure for the lead from Kimi Raikkonen. But the Red Bull driver held him off to win by 3.3 seconds. Paul di Resta saved a squirt of KERS to beat Fernando Alonso to the line and equal his best-ever F1 finish of sixth place. “I couldn?óÔéĽÔäót stay with those guys – the two Lotuses and Seb – so I had to consolidate from there,” he said afterwards.

“I am pleased the weekend is over,” he added. “There should be no real celebrations today. We can leave. We saw the size of the crowd today.”