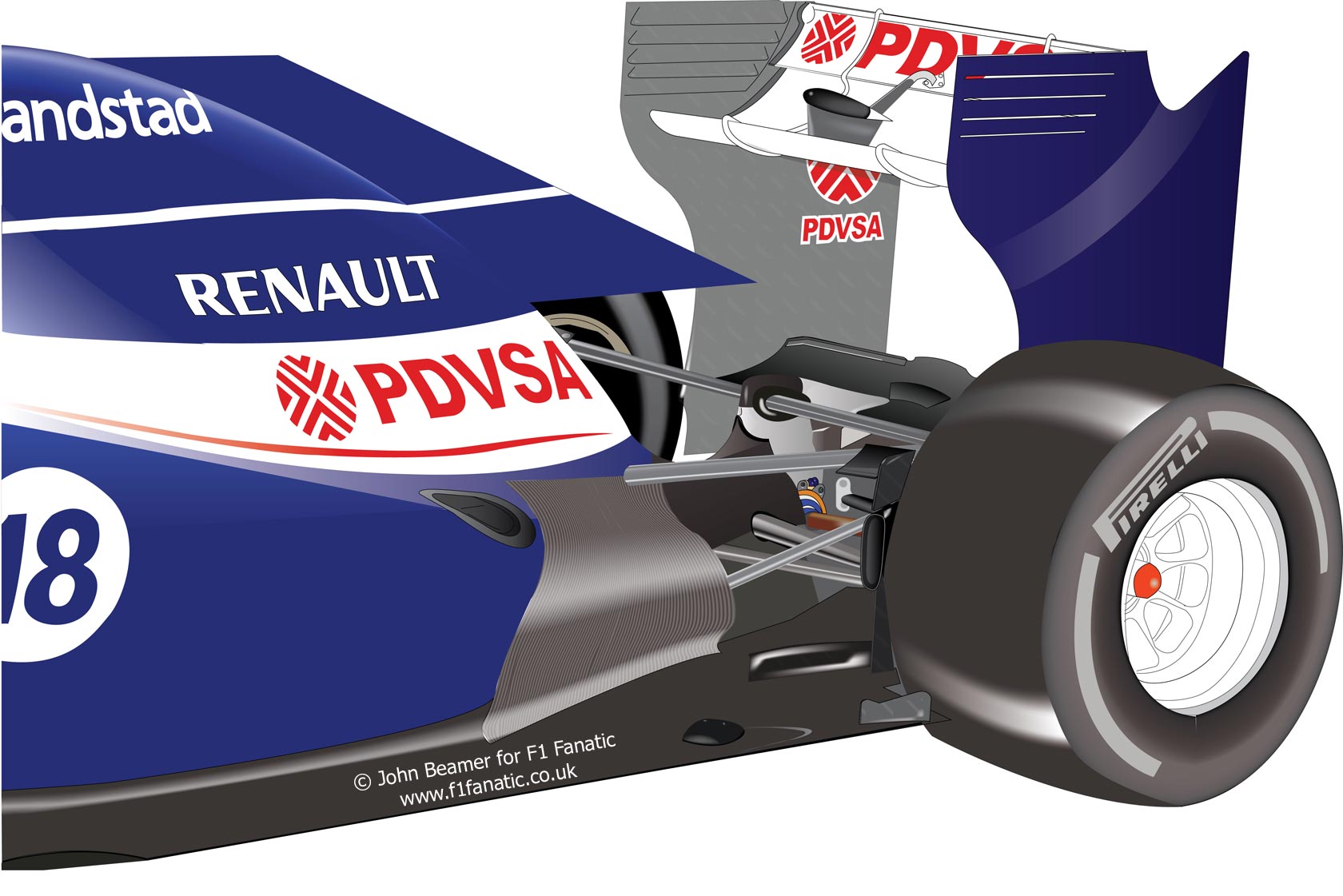 John Beamer explains how Williams have refined the radical gearbox they developed last year – and produced a more competitive car.

One of the early season stories has been the relative resurgence of Williams. The team that scored just five points last year already have 18 on the board after the first four races.

Over the winter they switched to Renault engines and recruited a new technical team. Consequently the FW34 has challenged for points in the first few races of the season.

The banning of exhaust-blown diffusers means F1 design this year is less about trick aerodynamics (Mercedes’ Double DRS aside) and more about good old-fashioned aerodynamic efficiency. In 2011 one of Williams?óÔéĽÔäó design objectives was to reduce the size of the gearbox as much as possible to maximise the area behind the engine. This micro-gearbox was carried over into 2012 with only minor modifications. The first illustration shows a close-up of the gearbox ?óÔéĽÔÇŁ the drive shaft is the bronze/orange axle and you can see how it plugs into the differential.

This compact design was enabled by a switch to pull-rod suspension. By placing the suspension components by the floor (as opposed to above the gearbox for a push-rod) a lot of space is cleared. There are two engineering issues to overcome.

Typically the upper wishbones are mounted at the top of the gearbox. Now this has disappeared there is a need to attach the wishbone to something and that something needs to be sufficiently strong to withstand the forces transmitted by the suspension. Williams’ solution is to raise and reinforce the gearbox casing to act as an anchor for the wishbones. This is a change to the FW33 design which featured a ‘Z’-link suspension to ensure the wishbones could successfully manage the forces.

In addition to making the geometry work the differential has to be lowered (otherwise it is physically impossible to shrink the gearbox) and the driveshaft angled sharply.

This is a potential disadvantage as the angled driveshaft may result in a small torque deficit as the rotational energy is translated into wheel motion (through some sort of angled gearing in the upright). It is noticeable that the FW34 sports a less angled driveshaft than its predecessor.

From the drawing it is easy to see the volume of space that the FW34 has in front of the rear wing. Airflow over the ‘coke bottle’ zone and particularly the beam wing is less obstructed.

Providing the design team can deliver a reasonable suspension implementation the low-line gearbox will be a net benefit to performance. This should be achievable given the extent to which teams have compromised the front suspension set-up for considerable aerodynamic gain. Given the role the diffuser plays in overall aerodynamic performance the ‘coke bottle’ zone will play a critical role in overall performance. One new development raced in Melbourne was the so-called ‘monkey seat’ above the beam wing – see the final illustration. This is a simple device to add rear downforce.

Many teams attach the monkey seat directly to the beam wing, which potentially impedes the efficiency of the wing although the effect is small. Williams have attached the device to its small gearbox. It’s a neat solution.

Williams has got off to a good start compared to last year. The question now is whether the team has the resources to develop the car successfully throughout the season – and whether other teams will consider their compact gearbox a route worth exploring themselves.