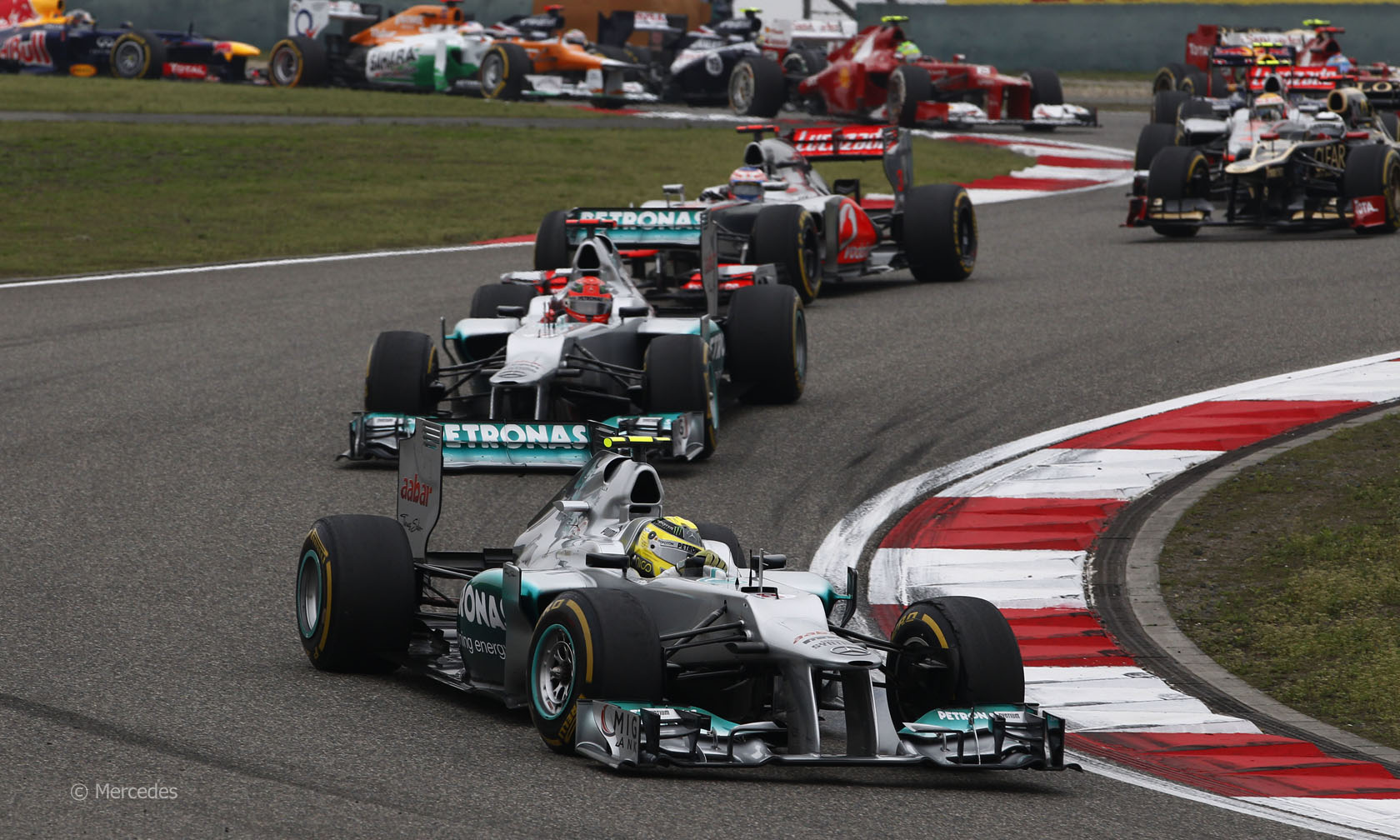 The Chinese Grand Prix was rated the fifth-best race since the beginning of 2008 by F1 Fanatic readers.

It was rated a strong 8.648, as Nico Rosberg took his first race win, ahead of a frantic battle for second place.

However this was still lower than the rating for last year’s Chinese Grand Prix, which is the highest we’ve recorded so far.

Here’s what F1 Fanatic readers had to say:

It started a bit slow, fewer overtakes then we’d have liked but it wasn’t awful, just a slow burner until it was apparent that everyone was on different strategies and that’s when the excitement built into the crescendo that was the final 20 laps. Great stuff!

If Button hadn’t had that bad pit stop and was able to challenge Nico for the win, then I’d have made it ten, possibly.

Still, like last year, the Chinese GP has come alive and is actually having lot of people turn up, I expect that was a result of last year’s race and they’ll probably get more people there next year as a result of today’s race.
S.J.M

Like many others, TommyB appreciated the race for second:

That battle for second was one of the best things I?óÔéĽÔäóve ever seen in F1. First half of the race was a 5/10 second half an 11/10.
TommyB

It was a tough day for the teams’ strategists. Nick.UK summed up their difficulty nicely:

They had to decide whether to keep position on a track where DRS wasn?óÔéĽÔäót helping and try and defend, or come in and lose 10-15 positions and try and get them all back with only 15 odd laps left.

They had to make a call, and despite the result for Raikkonen I still think it was the right one. They could pit and near enough guarantee no points, or stay out and keep some, as Vettel managed.
Nick.UK

There was debate surrounding the complexity of the different strategies, and whether it was a good thing:

I loved all the confusion with the strategies. I don’t mind using my brain to try and figure out the real race positions when people are on different strategies. Personally I love it.
infernojim

So much was going on I couldn?óÔéĽÔäót really follow it and I wasn?óÔéĽÔäót sure if cars were passing for position or because they were on differing strategies, which sapped my enjoyment of it slightly. Still a good race though!
Dan Thorn

However not everyone raved about the race:

Maybe I watched a different race to many here. The first three-quarters was very dull. Any chance of a fight for the win was ended with Button?óÔéĽÔäós last pit, the DRS didn’t work and the overtakes were a mainly result of tyres falling off the cliff and it was fairly predictable who was going to suffer (i.e. the ones who two-stopped).

Obviously the ones who didn’t suffer so much deserve a lot of credit ?óÔéĽÔÇŁ Grosjean, Vettel and of course Rosberg.
Brum33

Michael Schumacher’s retirement disappointed many who wanted to see a battle for the lead. Amid some criticism of the pit-crews Arijitmaniac argued that it’s not fair to blame one man:

He was doing his job. For whatever reason the wheel failed to be secured, but he was trying really hard to get it secured when Michael left.

In such tense situations these mistakes can happen. I see this more as a failure to act as a team, can?óÔéĽÔäót put the blame on one man.
Arijitmaniac

Icthyes pointed out the historical significance of Rosberg’s victory:

A new Grand Prix winner and (I think) only the third son of a race winner to win a race. The other two (Hill and Villeneuve) became world champions, so a good omen for Rosberg.
Icthyes

Although Kimi Raikkonen may disagree, some were sad to see the race finish:

I looked up and saw Lap 56/56 and I didn?óÔéĽÔäót want it to end.
Dusty in California

What did you make of the Chinese Grand Prix? Was it the best race of the season so far? Have your say in the comments.