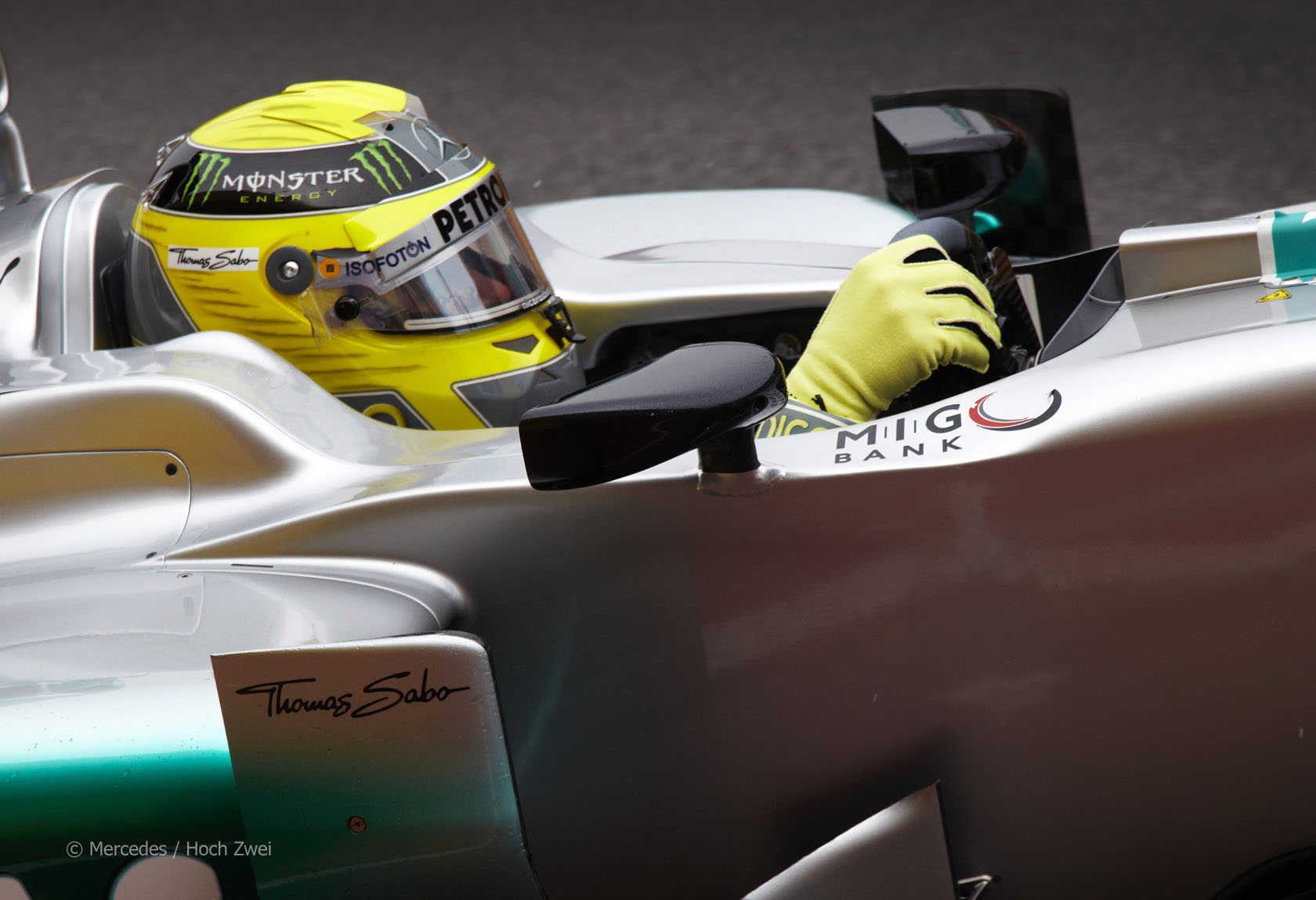 In the round-up: Nico Rosberg says Mercedes used yesterday’s wet running in Mugello to work out why they had struggled to perform in the rain in Malaysia.

Nico Rosberg: “We learned some valuable things this morning in the wet. Lately in the wet we haven’t been that strong, in Malaysia, so that was useful.”

“If the sport decides we are too aggressive we can change though; we can supply tyres that don’t degrade and allow you to push, as we did last year when the hard and medium tyres had negative degradation – the loss of performance from the tyre was less than the loss of fuel.”

“Did ten dry laps today around Mugello, which is the same as doing 1000 laps around Abu Dhabi track in terms of satisfaction.”

“What we’re doing is using different corners and sections to replicate tracks that we either can’t get to, or have changed so much that we need to do things to make them historically accurate.”

“For the 1981 season, Bristo explained, his predecessors at what then was simply McLaren were looking at ways to reduce the frontal area of their new car. The problem was that reducing the cross sectional area of the tub robbed it of its strength, and the aluminium monocoque technology favoured at the time simply wasn?óÔéĽÔäót strong enough to make it work.”

“What not to do to a ?é?ú2 million Ferrari F1 car… That’s going to be expensive, it’s meant to race at Monaco next week!”

Red Andy makes a case for a more radical change in the tyre rules:

If we?óÔéĽÔäóre considering tinkering with the tyre rules we might as well make the case for some wholesale changes.

I?óÔéĽÔäód open up the rules completely. Limit the number of sets used each weekend in the same way as currently, but allow the teams to bring any combination of compounds with them. No requirement to race on the tyres you qualified on, no requirement to use any particular combination of tyres during the race. We no longer need artificial rules like the two-compound rule to get people talking about the tyres, which is why Bridgestone insisted on them being introduced ?óÔéĽÔÇŁ they do that well enough anyway.

Adopting this approach, we?óÔéĽÔäód see a wider variety of strategies and we?óÔéĽÔäód avoid the spectacle of teams being hobbled because the tyres they?óÔéĽÔäóre forced to run don?óÔéĽÔäót work very well on their car.
Red Andy

The BRDC International Trophy, a non-championship race at Silverstone held today in 1964, saw a spectacular and exciting finish

Dan Gurney had started from pole position in his Brabham but retired from the lead when his brake fluid leaked out.

Team mate Jack Brabham took over the lead but came under intense pressure from Graham Hill’s BRM. The pair swapped the lead but Brabham held on to win as they crossed the line side-by-side.

The timekeepers gave them identical race times to a tenth of a second – 1hr 22’45.2 each – but declared Brabham the winner. Peter Arundell was third for Lotus, team mate Jim Clark having retired earlier.