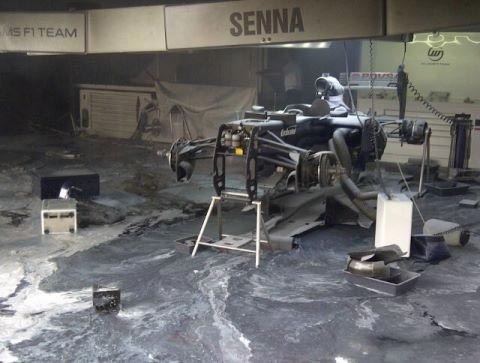 A serious fire broke out in the Williams pit after the Spanish Grand Prix.

It took hold shortly after 5pm local time as the team celebrated their victory in today’s race.

The fire was brought under control however the extent of injuries to team members remains unclear.

Force India COO Otmar Szafnauer told Sky one of their crew has been taken to the medical centre with smoke inhalation.

Thick clouds of smoke filled the area and the pit lane was evacuated after the fire.

Update at 17:24: Caterham have issued the following statement:

Caterham F1 Team was involved in a fire that started in the Williams F1 Team’s garage after the end of the Spanish Grand Prix.

All the team’s employees have been accounted for and four people have been taken to the circuit medical centre for examination; one with a minor hand injury and three with respiratory issues.

A further statement will be issued when more details about the incident are confirmed.

Update at 19:49: Williams have issued the following statement:

After today?óÔéĽÔäós Spanish Grand Prix a fire occurred in the team?óÔéĽÔäós garage which originated from the fuel area.

Four team personnel were injured in the incident and subsequently taken to the medical centre. Three are now receiving treatment at local hospitals for their injuries, while the fourth has been released. The team will monitor their condition and ensure they receive the best possible care.

The team, the fire services and the police are working together to determine the root cause of the fire and an update statement will be released in due course.

The Williams F1 Team would like to thank all of the teams and the FIA for their support in today?óÔéĽÔäós incident.

Update at 21:08: The FIA confirms 31 people were taken to the medical centre following the incident:

The FIA can confirm that a fire broke out in the Williams garage after the conclusion of the Spanish Grand Prix. The flames were quickly brought under control through the combined intervention of staff from Williams, Caterham and Force India, supported by the circuit fire services.

Thirty-one team members were seen by Circuit Medical Centre staff and all have been released, with the exception of seven who were transferred to a variety of local hospitals where they are receiving treatment.

The FIA is collaborating closely with the Spanish authorities investigating this incident and will be providing a further update as soon as more information becomes available.

128 comments on “Serious fire in Williams pit after race”