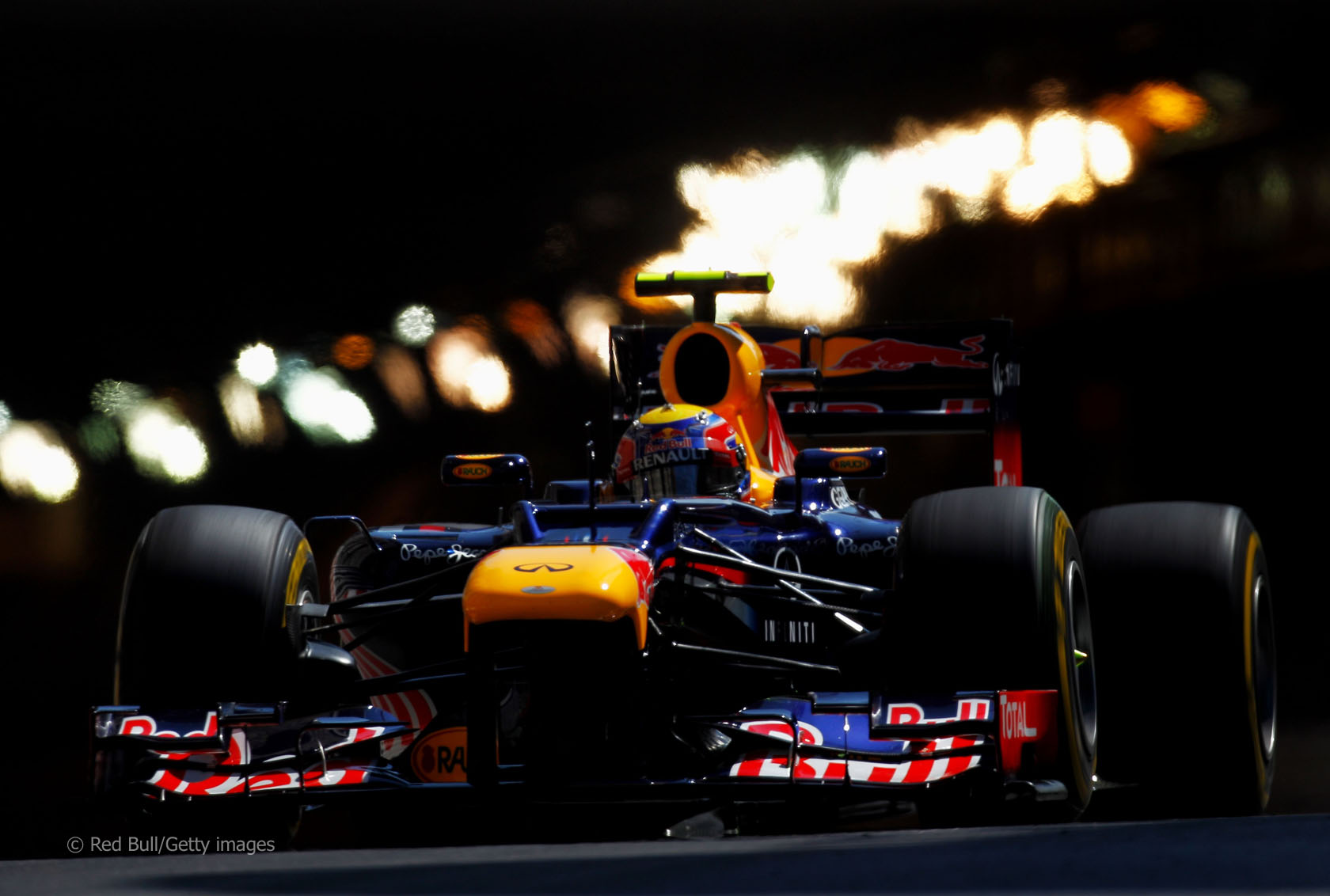 Michael Schumacher was fastest in qualifying for the Monaco Grand Prix – but will lose his it due to his five-place grid penalty from the Spanish Grand Prix.

That means Mark Webber will start Sunday’s race from pole after team mate Sebastian Vettel chose not to set a time in Q3.

The first part of qualifying got off to a busy start with all 24 cars taking to the track in the first few minutes. As usual traffic proved a problem – notably for Charles Pic, who was held up by Pedro de la Rosa at the end of his first lap.

But within a few minutes the session was stopped. For the second year in a row Sergio Perez crashed his Sauber – though fortunately not as seriously as his 2011 crash.

The Sauber driver hit the barrier at the Swimming Pool complex – replays showed his front-left wheel was not pointing in the correction direction before he hit the wall. The session was red-flagged while his car was recovered.

When the session restarted the Mercedes pair set the fastest times to begin with on soft tyres, with Pastor Maldonado’s Williams in among them.

Lotus waited until the track had quiet end before sending their cars out on soft tyres. Grosjean made it through into Q2 comfortably but Raikkonen’s last effort wasn’t quick enough and he had to make a flying visit to the pits for a set of super-softs.

He got the job done on the red-coloured tyres as did Sebastian Vettel, who also had to use the softer run to secure a place in Q2.

Rosberg led the way at the start of the second part of qualifying, a 1’15.022 putting him fastest, with Webber just 0.013s behind.

The other Red Bull of Vettel continued to struggle – his first effort left him ninth, complaining the car was “jumping around like a rabbit”.

Jean-Eric Vergne was the next driver to lose his car on the approach to the chicane, swiping the barrier on the left and losing his front wing. He toured slowly back to the pits, Felipe Massa having to take evasive action to avoid hitting the Toro Rosso.

On his return to the track on super-softs Massa set a new benchmark time, lowering the mark to 1’14.911 and securing his progression to Q3 for the first time this year.

Grosjean did his first laps on soft tyres but couldn’t produce a time quick enough for the top ten. As in practice he couldn’t find as great a lap time improvement on the super-softs as his rivals, but made it into the final ten.

His team mate joined him, once again scraping in with his final lap. Vettel also escaped elimination with his last effort, but again Button was unable to join them, ending up 13th.

Seven cars went out initially in Q3, the Ferraris and Vettel hanging back. Grosjean led the way to begin with, setting a 1’14.639, but Rosberg pipped him by six-hundredths of a second with his second lap on the super-soft tyres. Webber took up third behind them, followed by Hamilton.

The Ferrari duo took up sixth and seventh with their laps, but Vettel decided not to set a time, effectively settling for a place on the fifth row.

That was all the more extraordinary as his team mate had the pace to challenge for pole position. A 1’14.381 put him on top – until he was pipped by eight-hundredths of a second by Michael Schumacher.

Grosjean showed pace in the first sector of his final lap but a slow middle sector left him fifth.

But Schumacher’s pole position will be denied him because of the penalty he was handed in Spain. A five-place grid drop will put Webber on pole, sharing the front row with Rosberg.

156 comments on “Schumacher fastest but Webber on pole in Monaco”