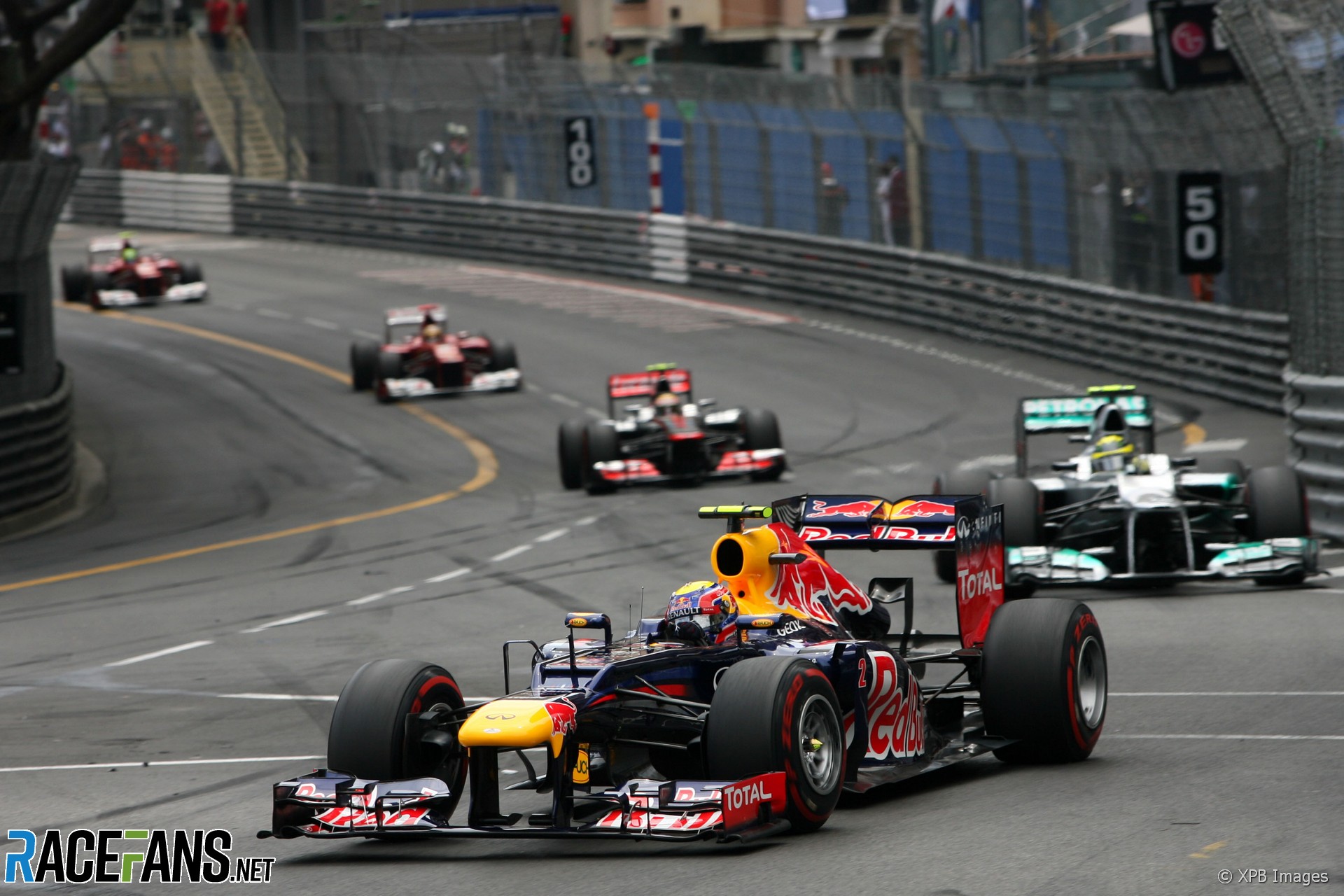 won a tense Monaco Grand Prix, crossing the finishing line with three cars within 1.3 seconds of him.

He soaked up huge pressure from Nico Rosberg in the closing stages as a sprinkling of rain allowed his pursuers to gain on him.

Rosberg in turn had Fernando Alonso and Sebastian Vettel breathing down his neck.

Webber held his lead from pole position at the start of the race, Rosberg slotting in behind him. But behind there was mayhem.

Lewis Hamilton and Romain Grosjean made slow starts. Alonso appeared on Grosjean’s right and the pair made contact, sending the Lotus towards Michael Schumacher on his left. This second contact turned the Lotus broadside across the track, Grosjean spinning to a halt.

The chasing cars darted around him, with some drivers forced across the first corner – notably Vettel, who climbed up to sixth.

Kamui Kobayashi clipped the Lotus on his way past, flying into the air and coming down with a bump that damaged the car enough for him to have to retire.

Pastor Maldonado ran into the back of Pedro de la Rosa at the first corner, putting both out. The Williams stopped at the hairpin without its front wing and the safety car was despatched, though it didn’t arrive until after the leaders had begun lap two.

When the race resumed Webber led Rosberg and Hamilton, the latter having to fend off Alonso as they came out of Rascasse. Felipe Massa took up fifth behind his team mate.

The top five had all started on super-softs but Vettel had opted for softs. Behind him were Kimi Raikkonen and Schumacher.

With the teams’ weather radars showing a chance of rain later in the race, the drivers were urged to look after their tyres. This was a stretch for some of them – Raikkonen was one of the first to fall back, holding up a train including Schumacher, Nico Hulkenberg, Bruno Senna, Paul di Resta, Daniel Ricciardo and Heikki Kovalainen.

The gap in front of Raikkonen tempted Mercedes to give up waiting for the rain and bring Rosberg in for a pit stop in an attempt to jump Webber. The front runners reacted, with Alonso using a quick in-lap and Ferrari’s superior pit work to jump ahead of Hamilton.

Vettel remained out on his soft tyres, gradually developing a lead. Mercedes told Rosberg of their suspicions Red Bull would use Webber to delay him and protect Vettel – but Rosberg stayed over a second behind Webber and there was little sign of Red Bull using such tactics. “Mark raced his race, I raced my race,” said Vettel afterwards.

When Webber’s lap times dipped below 1’19s Vettel was no longer able to draw away and the team quickly bring him in. It was a well-timed visit – he came out just in front of Hamilton, who was unhappy to discover he’d lost another place. “You should have kept me updated,” he fumed on the radio.

Hamilton had other problems – at one point he complained something was falling off a pit board and hitting him on the head when he passed the pits.

The race were going even worse for his team mate. Held up by the flying Kobayashi at turn one, Button spent the opening stint in Kovalainen’s wheel tracks, unable to pass the Caterham.

The team told him he’d been switched the ‘plan B’. He stayed out longer than Kovalainen and when the team thought he was far enough ahead he was told “box now to overtake”. But it didn’t go according to plan, the McLaren returning to the track behind the Caterham once again.

Raikkonen was jumped by Schumacher when he pitted. He lost another place to Hulkenberg when he tried to go up the inside of Perez at the exit of Rascasse while the Sauber driver was heading into the pits. The stewards handed Perez a drive-through penalty.

By now the teams were again worrying about rain – the early forecast had turned to naught, but the latest prediction of rain in the final laps looked more convincing. Sure enough by lap 65 light rain was falling.

Webber looked more tentative as the track became slippery, and Rosberg closed within a second of him. Alonso, Vettel, Hamilton and Massa joined him, and by lap 70 the six were covered by 3.6 seconds.

The near-impossibility of overtaking at Monaco overrode any rash moves from the front runners, even when they had to pick their way past Kovalainen, who’d damaged the front wing on his Caterham after attacks from Button and Perez.

The track never got wet enough for intermediate tyres. The only driver to try them was Jean-Eric Vergne, who had changed to soft tyres early and decided to gamble.

In the final laps the conditions improved again and although Webber still couldn’t breathe easily, the intensity of the pressure on him eased. He crossed the line with Rosberg 0.6s behind him, and the same margin covering both Alonso and Vettel in the next two places.

Hamilton, who’d been concerned with tyre wear in the final stint, took fifth ahead of Massa. When the rain finally broke after the chequered flag fell, he rued its late arrival.

Force India got both their drivers in the points while Raikkonen ended up ninth behind Hulkenberg. Senna took the final point for Williams.

Perez threw everything he had at Kovalainen and eventually took 11th having started last. Vergne had run seventh after Schumacher retired in the pits, but his second pit stop left him 12th.

Kovalainen defended firmly from Button, who spun trying to pass him at the Swimming Pool and then went off for good at Sainte Devote trying another move. The Caterham driver secured an important 13th place for the team after him last pit stop saw him leave to pits just in front of Timo Glock.

Button was classified last in 16th despite stopping, Narain Karthikeyan finishing two laps down in 15th for HRT.

Webber’s win means F1 sustains its remarkable streak of different winners – six in as many races, a new record for the start of a season. He joins Vettel on 73 points in the championship, but Alonso lies three points ahead of them.