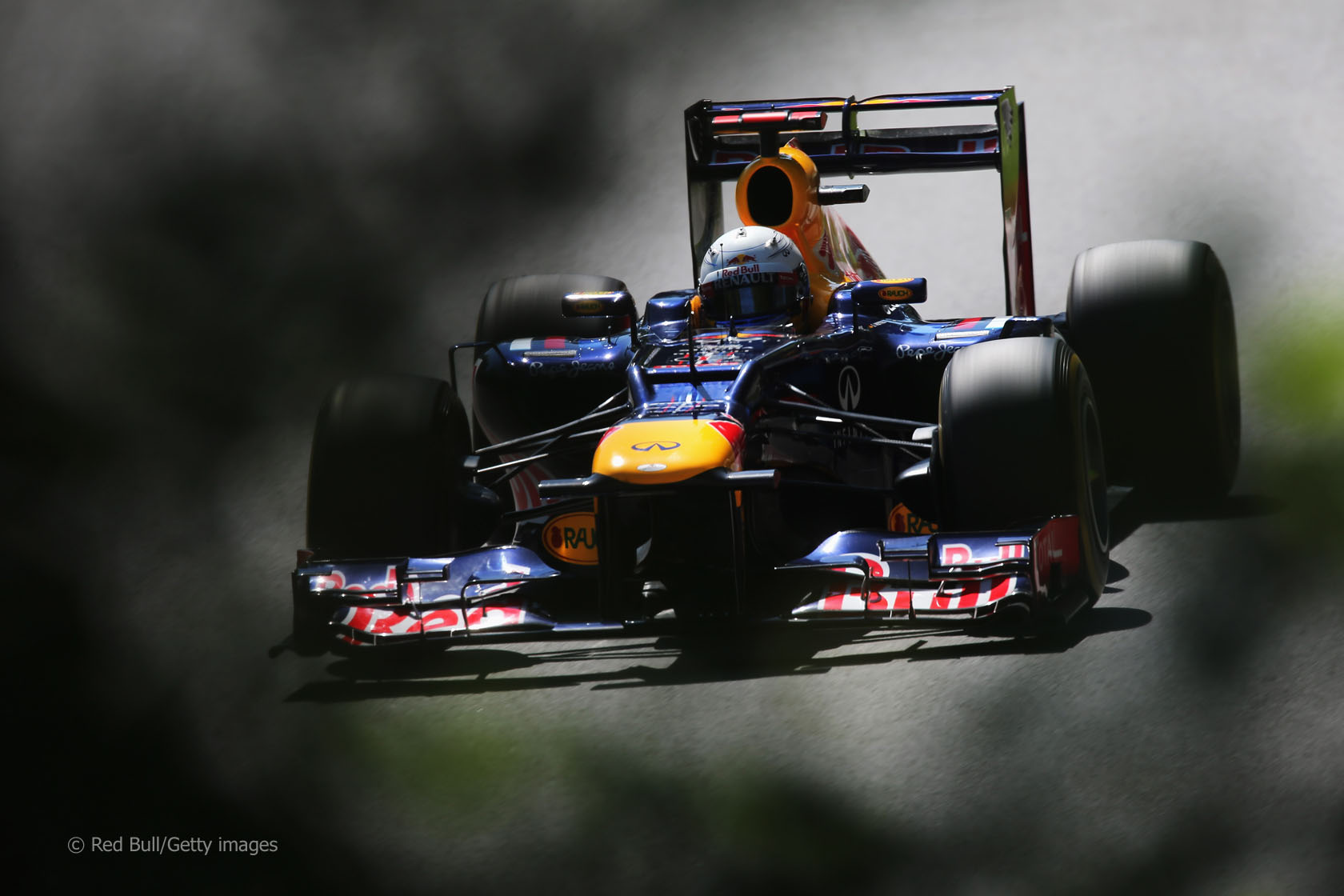 Red Bull are yet to score a victory in the Canadian Grand Prix.

They’re ideally placed to change that thanks to Sebastian Vettel’s pole position.

Can Lewis Hamilton or Fernando Alonso come between Vettel and the win he lost on the final lap last year?

The grid and opening sequence of turns at the Circuit Gilles Villeneuve has an unusual layout that invites opening-lap incidents.

Pole position is on the left-hand side of the track, on the racing line which leaves the pole sitter covering the inside of the first proper corner.

As the drivers on the clean side of the track tend to get away better, the third-placed starter often gets a run at the driver in second. This has happened in the last two standings starts here (2010 and 2008), but on both occasions the driver who started second was able to cover the move.

Back in 2007 Alonso started well from second but got too ambitious on the brakes at the first corner, skated across the run-off and fell to third.

Unless he makes a poor start, Vettel should be able to retain his lead quite easily – it’s Hamilton who stands to come under greater threat from Alonso.

Behind them, Mark Webber is starting off-line and his recent history of poor starts will have Nico Rosberg eyeing a chance to pick up a place on lap one.

Romain Grosjean has also made some poor starts this year and is seventh on the grid, directly in front of Michael Schumacher, who he has tangled twice with on the opening laps already. Both should give each other plenty of room if they want to still be in good shape on lap two.

The cramped confines of the circuit leave little run-off in places and makes recovering stranded cars difficult. That makes for a high likelihood of safety car deployments.

This in turn has an effect on race strategy, dissuading teams from leaving drivers out in front on worn tyres, preferring to keep them on fresh rubber so they’re safe from attacks from behind.

Furthermore, overtaking is easier here than at many tracks, though the trimming of the DRS zones to a single, shorter section will hopefully make it not as unchallenging as it was last year.

Ordinarily another factor makes teams especially eager to be first to pit – the ‘undercut’, by which the first driver onto fresh tyres can lap more quickly, gaining positions on those who were ahead of him.

But it remains to be seen if that will work well here. In qualifying drivers were taking several laps to get the best out of their tyres.

What’s more, the tyres seem to be lasting very well over a race stint, as Pirelli motorsport director Paul Hembery explained: “The level of tyre degradation is so far quite contained with the super-soft lasting for 30 laps or more, so we could see a one-stop strategy from some teams while the majority might try a two-stop strategy.”

As was explained in the weather forecast, temperatures at the circuit are expected to continue to rise on race day. This will be better news for some teams and drivers than others.

Hamilton in particular was quicker in cooler conditions on Friday. Red Bull and Ferrari seem to prefer the warmer temperatures.

All the drivers who start in the top ten will be on super-sofs, with the exception of Jenson Button. He had used all his super-softs before Q3 began, so he ran on softs. If he can make them last long enough to finish the race with a single further stint on super-softs, he could recover something from what has been a poor weekend so far. Hamilton continued his run of qualifying within the top three, but said he was “very surprised” to get on the front row of the grid.

“We definitely struggled with working with the tyres in FP3 and in qualifying,” he said, “having to push extremely hard to try to get the temperature, to get the tyres to switch on, but very, very fortunately we had still a new set in Q3 and just managed to get through.”

Schumacher was surprised to be told he had failed to cross the start/finish line early enough for his lap time to count, despite having seen green lights on the gantry as he passed the pits:

“Our calculation for Q3 was to go for two laps and attack on the second one after we had seen at the beginning of Q3 that one lap did not work properly. I don’t really know how we managed not to make it over the line early enough to start the second lap but, when I passed the line, the team told me it was too late.”

It turned out he failed to make it in time by just four-hundredths of a second.

Raikkonen’s failure to reach Q3 was partly due to a hydraulic problem which caused a problem with his differential. His team say there will be no problems fixing it before the race.

Each of the top three drivers set the best time in a different sector. Vettel was fastest through the final part of the lap.

Intriguingly, team mate Webber was not especially quick here, his sector time ranking 11th. He was a quarter of a second slower than his team mate through this stretch, almost exactly the same as in qualifying last year.

Sergio Perez was disappointed to miss the final ten: “Unfortunately on the first lap of my last run with new super soft tyres I flat spotted them when braking into turn eight. The car was then vibrating a lot, which meant I could hardly see the braking points”

However HRT beat Marussia for the first time this year thanks to Pedro de la Rosa. “We?¾įķ╝įõ¾ve been quick the whole weekend,” he said, “it wasn’t a coincidence and we should do well tomorrow.”

While it’s clear that Red Bull have the slowest top speed, the gaps between the cars aren’t that great.

For example, Hamilton was eighth-quickest through the speed trap, yet just over 6kph quicker than Vettel.

Your view on the Canadian Grand Prix

Who do you think is going to win the Canadian Grand Prix? Which driver will offer the strongest challenge to Vettel?