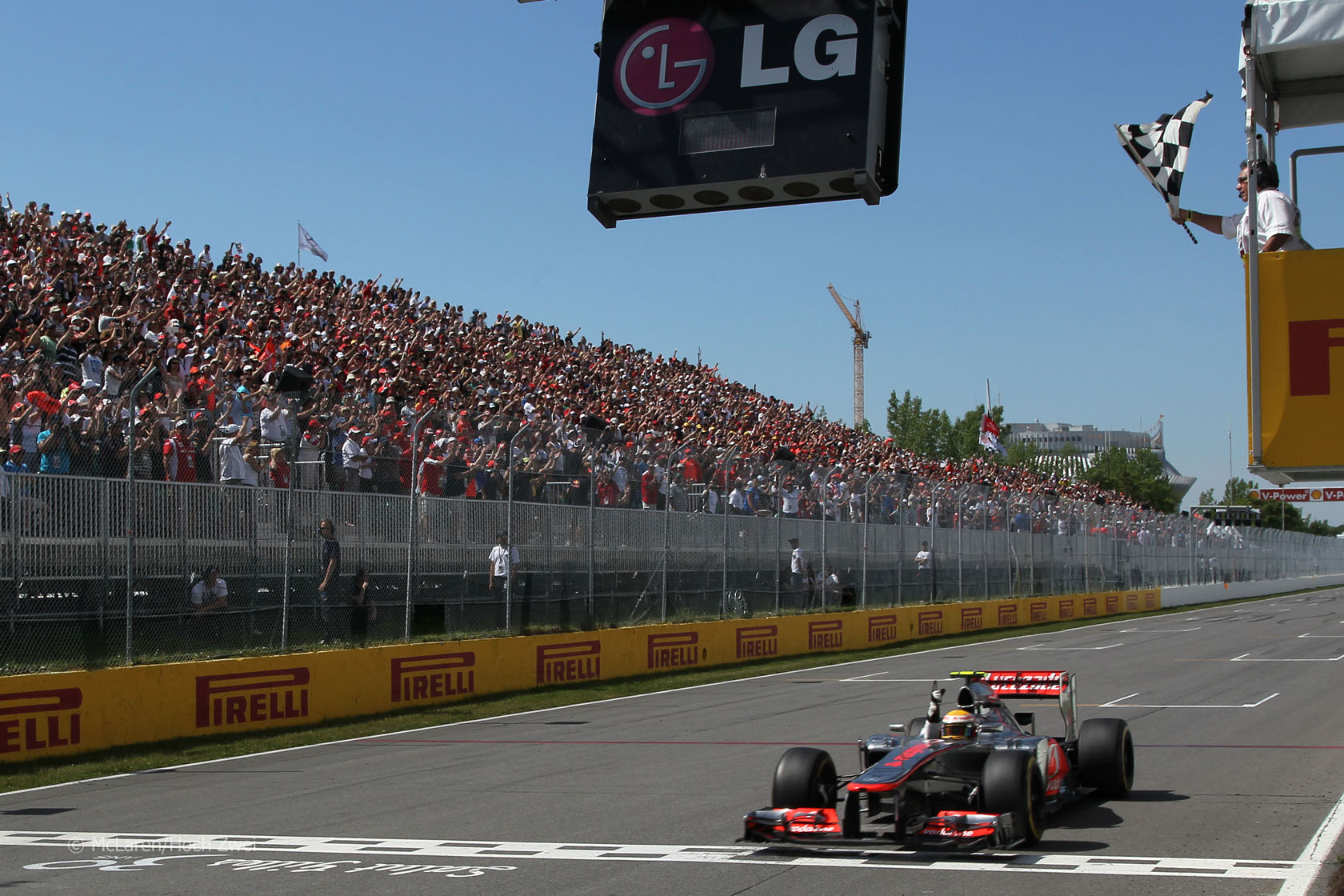 Lewis Hamilton claimed his first win of 2012 in a riveting Canadian Grand Prix.

He led much of the race but a late pit stop left him needing to pass Sebastian Vettel and Fernando Alonso to claim the win.

In a dramatic end to the race Romain Grosjean and Sergio Perez came through the field to claim second and third place.

The race got off to an orderly start with the top six holding their positions: Vettel pulling away into the lead followed by Hamilton and Alonso.

Nico Rosberg made a good start but couldn’t find a way past Mark Webber in the opening corners. His attempts to find a way past allowed Felipe Massa to get a run at him.

After being held back for a lap the Ferrari driver squeezed through on the second tour. But it was short-lived: on lap six he spun at the exit of turn one and fell to 12th place.

By now Paul di Resta had also passed Rosberg so it was the Force India driver who took over fifth place.

Now on the back foot strategy-wise, Massa pitted on lap 13. Di Resta came on the next lap, which released a train of cars led by Rosberg.

As the front-runners drew closer to their pit stops Hamilton began to edge within range of Vettel. Alonso was coming with him as well, but just as it seemed a three-way battle for the lead would develop Vettel ducked into the pits on lap 17.

Hamilton led for a lap before pitting and, despite a sluggish getaway, returned to the track before Vettel had rounded turn two.

Alonso came in the next time by and Ferrari treated him to their usual five-star service. He scampered out of the pit lane before Hamilton and Vettel arrived, taking over the lead.

But Hamilton was already flying on his fresh tyres and now we had a battle for the lead on the track. Alonso ran deep at the hairpin, slowing down Hamilton in a bid to gain an advantage as they came out of the corner.

But the McLaren was on him as they crossed the DRS line and Hamilton was easily through. Vettel took a look at the Ferrari in the following laps but his car lacked the punch in a straight-line necessary to claim the place.

Hamilton moved back into the lead after Grosjean’s pit stop on lap 21, and pumped in a series of rapid laps to pull out a three-second lead.

Perez moves ahead in battle of one-stoppers

Behind the leading trio were three drivers yet to make their first stops: Kimi Raikkonen and the two Saubers, Kamui Kobayashi leading Sergio Perez.

All were on the soft tyres, which Jenson Button had also started on. But once again he was struggling for pace and he pitted for super-softs on lap 17.

It was the beginning of another poor race for the McLaren driver, who eventually made a second stop for more super-softs as he struggled to make either of the compounds work.

Kobayashi pitted on lap 24, allowing Perez onto Raikkonen’s tail. The Lotus driver stayed out another 17 laps before pitting and Perez went a lap further, jumping the Lotus driver in the proces. As he came out of the pits, Rosberg had just past Raikkonen, and the Mercedes driver beat the Sauber as it left the pit lane.

Their pit stops put Webber back into fourth, but some way behind the leading trio. Hamilton was being kept informed of the gap to his pursuers but was concerned about strategy.

McLaren’s strategy became clear when Hamilton asked his crew if they thought Alonso and Vettel were going to try to make it to the end on a single stop when they were planning on making another. Shortly afterwards Hamilton was in.

Their problems in the pits have been well-documented this year and this stop didn’t go perfectly either – a slow change of the right-rear wheel kept him stationary for 5.5 seconds.

Alonso and Vettel didn’t flinch as Hamilton returned to the track and instantly began taking a second per lap out of them – making a second pit stop was clearly not in their plans.

Hamilton’s pace was relentless and with drivers able to pick each other off in the DRS zone with ease his passage into the lead looked increasingly inevitable. By lap 60, with ten to go, he was 1.6 seconds per lap faster than Alonso and the top three were covered by six seconds.

Vettel didn’t even bother to defend his position when Hamilton came at him with his DRS activated three laps later. With six laps to go, Red Bull bowed to the inevitable and called Vettel in for what in the refuelling days would have been called a ‘splash-and-dash’. This was more of a ‘rubber-and-run’.

At the same time Hamilton was all over Alonso, carefully eyeing a pass at turn eight while Alonso carefully defended his position. Hamilton, well aware there was no need for a hasty move, patiently waited for the DRS zone and reclaimed the lead.

It was the beginning of a painful end to the race for Ferrari. Incredibly Grosjean, who had made his single pit stop one lap after Alonso, was still lapping strongly and claimed second place with ease. Another one-stopper, Perez, took third place off him.

Ferrari also came to regret not emulating Red Bull’s tactics as the re-soled Vettel took fourth off Alonso. He had been fortunate to survive a brush with the Wall of Champions while wringing the maximum out of his RB8 after returning to the track. He claimed the fastest lap on the final tour.

Alonso lost four places to finish fifth, crossing the line with Rosberg less than half a second behind him. Webber was 1.2s behind them with the flying Raikkonen giving him grief – the Lotus driver set his fastest lap on the final tour and was 0.4s behind the Red Bull at the line.

Behind them came another pair of cars covered by less than a second, Kobayashi ahead of Massa.

Having run fifth early on Paul di Resta was a disappointed 11th, followed by his team mate. Pastor Maldonado ended another disappointing weekend for Williams in 13th, followed by the Toro Rosso pair.

Heikki Kovalainen in 18th was just 13s behind the other Williams of Bruno Senna, who in turn had Button in sight, 1.4s ahead and one lap down.

Vitaly Petrov and Charles Pic also finished. The other Maurssia of Timo Glock retired as did both HRTs with brake trouble.

The final retirement was, once again, Michael Schumacher, after a broken hydraulic pipe jammed his DRS open.

Hamilton’s victory was his third in five appearances in Canada, on the fifth anniversary of his maiden F1 triumph.

After a difficult few races it puts him in the lead of the world championship. But as we’ve seen so far this year, that may not necessarily last very long.