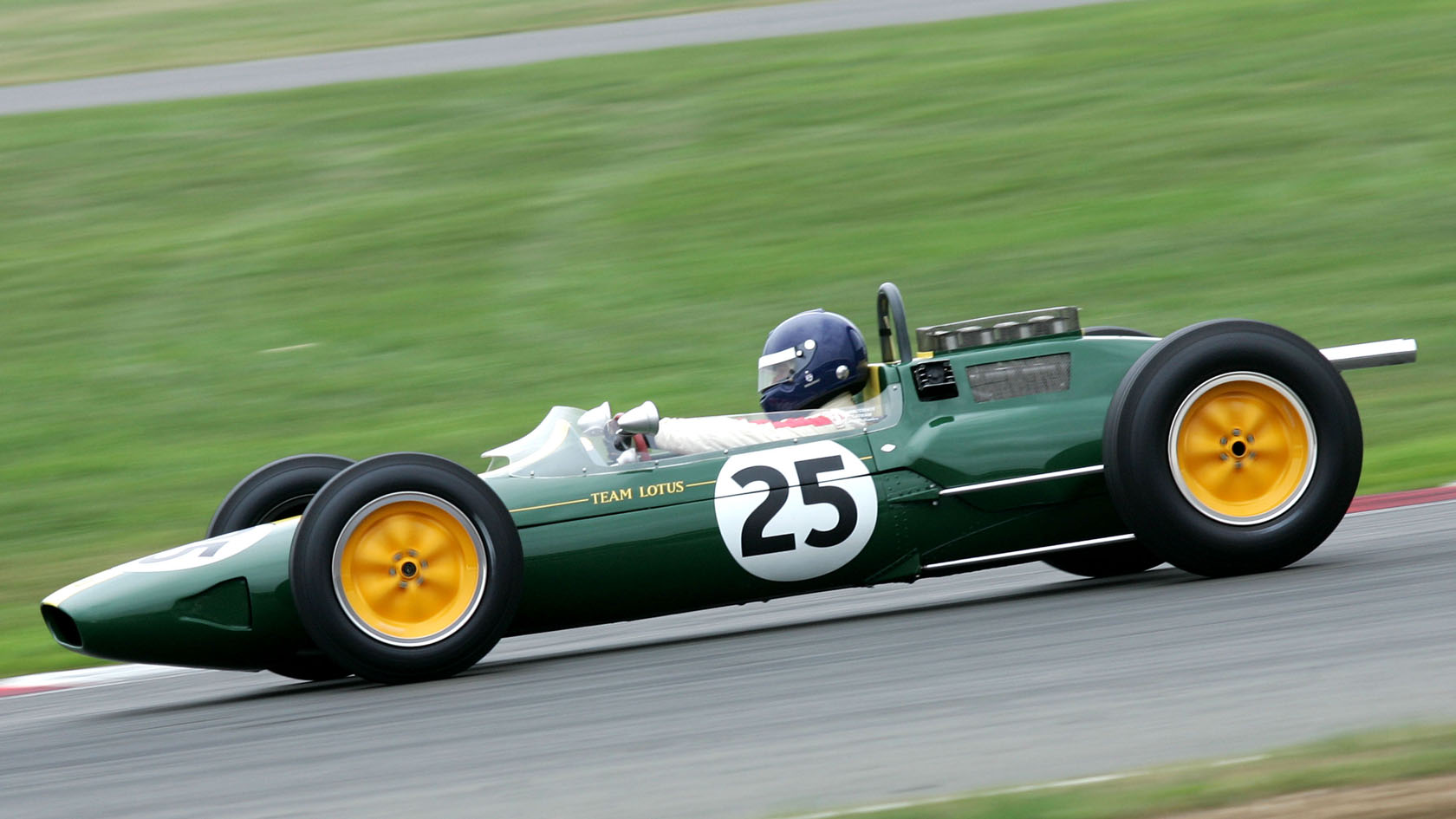 His victory in the 1962 Belgian Grand Prix at the wheel of a Lotus 25 marked the beginning of an era in which he and team owner Colin Chapman dominated Formula 1 racing.

The 25 set a trend that would be emulated by later Lotuses such as the 33, 49 and 72. Chapman produced a car that marked a new direction for F1 car design, and pointed the way towards a future everyone else eventually followed.

Though unreliable at first, the Lotus 25 remained in service for several seasons, and in Clark’s hands it was tremendously successful.

The original Spa-Francorchamps was a perilous circuit even by 1962 standards.

Over twice as long today’s version, the race took place on a 14.1km (8.8-mile) course comprised of public roads winding through the Ardennes forest.

The cars were no longer lapping at the record pace of 218.8kph (136mph) set in 1960, due to the reduction in engine capacity to 1.5 litres in 1961. Yet this remained the fastest track on the calendar.

Long straights allowed the cars reach top speed several times per lap. In between them fast, open curves like Burnenville, the Masta Kink and La Carriere dared the drivers to shed as little speed as possible.

Of those corners, Blanchimont is the only one which remains on the modern circuit. Today it is bordered by smooth, flat tarmac and a deep tyre-wall.

But 50 years ago those who asked too much of their car’s capabilities, or suffered a technical problem at a critical moment, had little room to survive if they went off. Many met their end against trees or buildings.

Two years earlier the Belgian Grand Prix claimed the lives of Alan Stacey and Chris Bristow. Stacey had the misfortune to be hit in the face by a bird, causing him to crash, clearing an embankment at the side of the track before plunging down into a field where his car ignited.

Bristow’s fate was no less appalling. While trying to hold off local driver Willy Mairesse for sixth place he skidded off the track where a low railing sliced through his neck.

The question of whether the circuit was too dangerous to race on divided opinion among the drivers. Clark was among those who confessed to hating the track, having seen the consequences of Stacey and Bristow’s crashes.

Clark’s Lotus 25, powered by a Coventry-Climax engine, was ideally suited to the demands of Spa. The team had missed the power of a V8 engine in 1961, and its Coventry-Climax unit gave them the performance they needed to compete with the likes of Ferrari.

The increased fuel requirement of the engine compared with the four-cylinder motor used the previous year had led Chapman and his design team into new territory with the 25. At the suggestion of team member John Standen, Chapman incorporated the enlarged fuel tanks within the structure of the body, creating an aeroplane-style monocoque chassis.

This was not unheard of in car design, but Chapman pioneered its successful use in Formula 1. It greatly increased the rigidity of the chassis, producing a superb-handling car which Clark used to great effect.

The new car had more than its share of teething trouble. When the season began at Zandvoort in May, Clark led the opening laps before dropping back with a clutch problem. A similar fault ended his race in Monaco. And practice in Spa got off to an inauspicious start.

Early on in Friday practice the camshaft broke on Clark’s engine. That left him with little to do on Saturday as a replacement was rushed to the track and fitted to his car that evening. With no practice time left, he took his Lotus 25 out onto local roads to test the engine.

Of the 20 cars entered, almost half were Lotuses, the majority in the hands of private entrants. Clark’s was the only example of the new 25 – team mate Trevor Taylor had an older 24, of which there were half-a-dozen examples on the grid in total. Rob Walker and other Lotus customers were unimpressed to discover the 24, which was new for this season, had been superseded so quickly.

Another 24 was arranged for Dan Gurney, as his Porsche team were unable to compete due to a strike at their factory. But after practice he deemed the car undriveable and did not start.

A 21 and a 1960-spec 18 completed the Lotus entrant, the latter in the hands of Lucien Bianchi, grand-uncle of current Ferrari development driver Jules Bianchi, his car entered by the Equipe National Belge.

The four Ferraris present were all entered by the works team – and even that was one too few to accommodate their five-strong F1 driver line-up. Lorenzo Bandini had no car for this race.

Having a car was a mixed blessing, as his team mate Giancarlo Baghetti discovered. On Saturday the Ferrari mechanics sent him out of the pits without fastening the engine cover on his 156. It blew open as he reached Eau Rouge, causing a substantial crash, though he was unhurt.

The reigning world champions were enduring a torrid start to the season. Their powerful V6 engine made them the class of the field the year before.

Phil Hill had won the drivers’ championship at Monza, but team mate Wolfgang von Trips and 15 spectators had lost their lives in a terrible crash.

Now their rivals were equipped with V8 engines from BRM and Coventry-Climax which were at least their equal, and the superior handling of the BRM and Lotus chassis exposed the shortcomings in Ferrari’s.

Mairesse had given the team some cheer with victory in the non-championship Naples Grand Prix. But that race was held on the same day as the first round of the championship at Zandvoort, so none of their significant rivals were present.

Enzo Ferrari’s efforts to persuade Stirling Moss to drive his cars over the winter had finally borne fruit. But then Moss was badly injured in a crash at Goodwood one month before the start of the season, which ended his racing career.

After winning the championship, Hill had pledged his future to the team. This was despite several mechanics leaving in a dispute over pay – they later set up a rival outfit, ATS.

Despite the 156’s shortcomings, Hill finished on the podium in the first two races of the year and went into the third round of the season tied for the lead of the championship with his BRM rival and namesake Graham.

Having started the first two races of the season from second place, Graham Hill went one better in Spa, taking pole position.

He had begun his third season for BRM with a win at Zandvoort, and had been on course to repeat it in Monaco when his engine failed after 92 of 100 laps, handing victory to Bruce McLaren.

At Spa Hill shared the three-car front row with McLaren’s Cooper and Taylor’s Lotus – the latter qualifying a creditable third on his first visit to Spa-Francorchamps.

The highest Ferrari on the grid was that of Phil Hill in fourth place. Mairesse matched Innes Ireland’s best lap time to the nearest tenth of a second – Ireland won a coin toss to decide who started alongside Hill.

Clark’s limited practice running left him on the fifth row in 12th place.

John Campbell-Jones had practised in an Emeryson but gearbox problems led him to borrow a Lotus which he started from last place. He had not set a time in his new car, but had lapped in 4’26.9 in his Emeryson.

This brought the Lotus chassis tally back up to nine after Gurney’s withdrawal.

With no support races, the F1 cars lined up for 32 laps which would see them cover 280 miles, 40% longer than today’s maximum Grand Prix distance.

The top three pulled away in grid order at the start, with Mairesse taking over fourth place. Four minutes had passed before they returned to the start/finish line, by which time Clark had worked his way up to fourth.

He maintained a watching brief in the opening laps, dropping to fifth and circulating behind the lead quartet, limiting the strain on his new engine. Even so a gap opened up between him and Ireland in sixth.

Ahead of Clark the cars were swapping places frequently on Spa’s long, flat-out blasts. Taylor took over the lead, then Mairesse, cheered on by his home crowd.

On the eighth tour Clark picked off three of his rivals to take second place. The next time by he was in the lead – and there he remained for the rest of the race.

Mairesse and Taylor continued to disupte second place, the pair swapping places lap after lap. But on the 26th tour Mairesse, who had a reputation for wildness, misjudged his attack and hit the rear of the Lotus.

The gearbox on the Lotus extended beyond the rear of the car, so that when Mairesse made contact he hit the selector rod, knocking Taylor out of gear and pitching him into a spin. Taylor’s car was heading for a telegraph pole but, fortunately, a second contact with Mairesse kept him from striking it side-on.

Even so, the accident was enormous and both were fortunate to survive it. Mairesse’s car inverted and caught fire – he escaped with minor burns. Taylor also climbed from his car with no significant injuries. He was spotted by John Surtees, who slowed as he passed the Lotus pit to signal to them that their driver was unhurt.

This promoted the two Hills to second and third, Graham ahead of Phil, the former coping with a failing engine. The latter was shadowed by his junior team mate Ricardo Rodriguez at the end.

Surtees and Jack Brabham took the final points-paying positions, the latter marking time in a Lotus until the arrival of his first of his own F1 cars later that year. In the early sixties, non-championship races for Formula 1 cars vastly outnumbered points-paying rounds. Clark already had multiple wins in non-championship rounds to his name, so this first world championship victory did not have the same immediate resonance it has today.

But this was his first triumph at the wheel of the car he would claim his first world championship title with.

Poor reliability hampered his championship prospects during the rest of 1962. But the team underlined their potential at the end of the year as Clark and Taylor reeled off victories at Oulton Park, Mexico City, Kyalami and Westmead driving 25s.

The following year Clark dominated the world championship. In a season when drivers could only count their six best results from ten races he scored the maximum points available and then some, with seven wins, a second and a third.

He may have hated the Spa track, but it rewarded his skill with four consecutive victories, beginning with this one. The first three of those came at the wheel of a 25.

On that day in Spa in 1962, while one world champion was in the ascendancy, another was heading into decline. Phil Hill had become the only driver to finish all three of the opening races on the podium, but Ferrari team manager Eugenio Dragoni telephoned Enzo Ferrari with a damning assessment after the race: “Your great champion didn’t do anything.”

Hill resolved to join the Ferrari defectors at ATS for 1963. The car proved disastrously uncompetitive and his career never recovered. After that day in Spa, he never again stood on the podium at a world championship race.