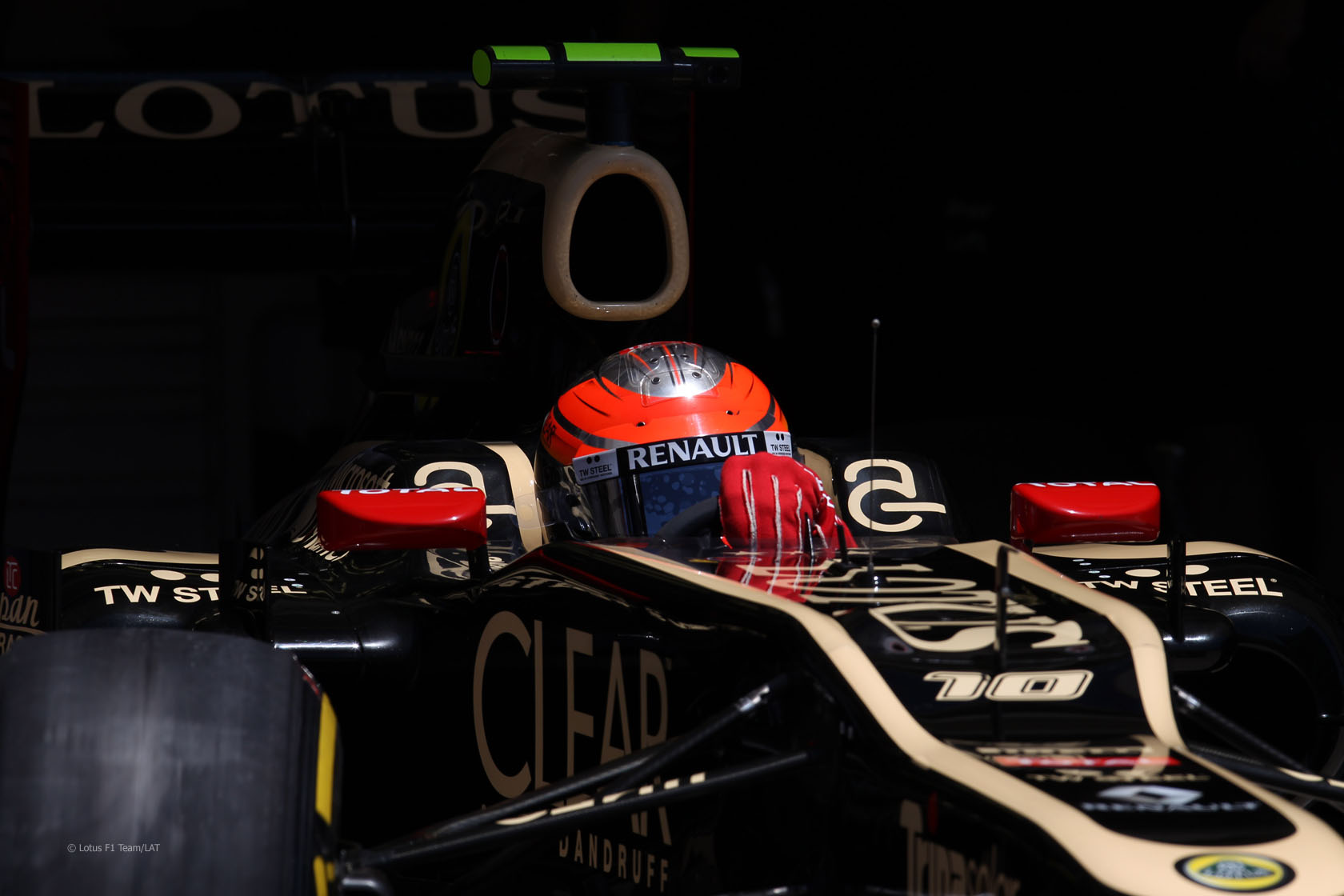 In Canada two weeks ago Sebastian Vettel and Lewis Hamilton shared the front row of the grid – but victory went to the McLaren driver.

Can Vettel stay ahead this time – and become the first driver to score two wins this season? Or might Lotus finally make good on the potential they’ve previously shown?

On Valencia’s little-used track, starting on the racing line can be a distinct advantage. That was certainly the case in today’s GP2 race, where the drivers on the even-numbered grid positions got away poorly.

Vettel should have no difficulty getting to turn two (the first real corner) ahead of the chasing pack, who may well be led by third-placed Pastor Maldonado if Lewis Hamilton struggles on the slippery side.

The opening sequence of chicanes offers a precious chance to gain places before the cars settle in to their usual single-file pattern at Valencia. Valencia has the shortest pit lane on the F1 calendar. Because drivers lose comparatively little time in the pits, teams are more likely to risk making an extra pit stop.

Given the tyre performance seen so far this weekend, that could edge them towards two pit stops instead of three.

Counter-balancing that is the potential risk involved in getting stuck behind a slower car. Yes, the DRS zone should help reduce that (see below), but until the race begins teams will be unsure just how straightforward overtaking may be.

A pit stop typically costs drivers around 22 seconds in Valencia. But the field is especially close this weekend – less than a second per lap covered the top 14 in final practice – so the leaders may find it takes a long time for a gap to appear which they can drop into.

The teams will also be concerned about the potential deployment of the safety car and the effect it could have on their strategies. Historically we’ve seen fairly few safety cars here, but we only have four (F1) races of data to go on.

It also illustrated the high risk in not pitting after your rivals do – as erstwhile runaway leader James Calado discovered to his cost, falling from first to ninth.

Hamilton and Vettel will be wary of the pace shown by the Lotus drivers – who start fourth and fifth. Lotus’s trackside operations directory Alan Permane said: “We?óÔéĽÔäóre very happy with today?óÔéĽÔäós performance and both drivers have done an excellent job.”

“We?óÔéĽÔäóve come from much further back on the grid than [fourth or fifth] and finished very well, so we have good confidence heading into tomorrow?óÔéĽÔäós race.”

While the top ten will start with the soft tyres they qualified on, the likes of Michael Schumacher and the Ferrari drivers have a free choice, which should allow them to make progress.

Unusually, most of the drivers who reached Q3 did not improve their times. One of them was Nico Rosberg, who blamed Lewis Hamilton:

“I can’t be happy with the outcome today. We were quick throughout but when I was just about to start my final lap, Lewis was slowing down in the last corner. I had to start my quick lap behind him which made it impossible to improve my time.”

The stewards investigated Hamilton but decided he had not driven unnecessarily slowly in the final sector.

Paul di Resta was especially disappointed at his failure to improve – had he matched his Q2 time he would have qualified on row three. “I locked a wheel and really screwed up the last sector,” he said.

Jenson Button had shown improved pace during practice and throughout most of qualifying – but hit trouble during the crunch time in Q3: “The team worked really hard overnight to improve the issues we?óÔéĽÔäód had with front [wheel] locking during Friday practice ?óÔéĽÔÇŁ and, this morning, I felt we?óÔéĽÔäód improved the car a lot, which was really encouraging.

“Somehow, however, my car felt very different on fresh rubber at the end of Q3 than it had felt all day up to then. On my final run in Q3, the balance felt very different ?óÔéĽÔÇŁ I had too much understeer ?óÔéĽÔÇŁ and, every time I touched the brakes, I locked the fronts. I don?óÔéĽÔäót know whether the circuit had changed, but I just couldn?óÔéĽÔäót stop locking my fronts.”

The times were remarkably close in qualifying. A superb final sector from Pastor Maldonado – a tenth of a second quicker than anyone else’s – put him in the hunt for pole position.

Both Lotus drivers lost time in the middle sector which prevented them from qualifying higher. But Sebastian Vettel had the measure of all his rivals.

Overtaking has tended to be very difficult in Valencia. The DRS zones for this year have been reconfigured, with one instead of two, albeit a slightly longer zone.

Sebastian Vettel is giving away almost 6kph to Lewis Hamilton in a straight line – not much, but it could prove decisive if Hamilton can get within DRS range.