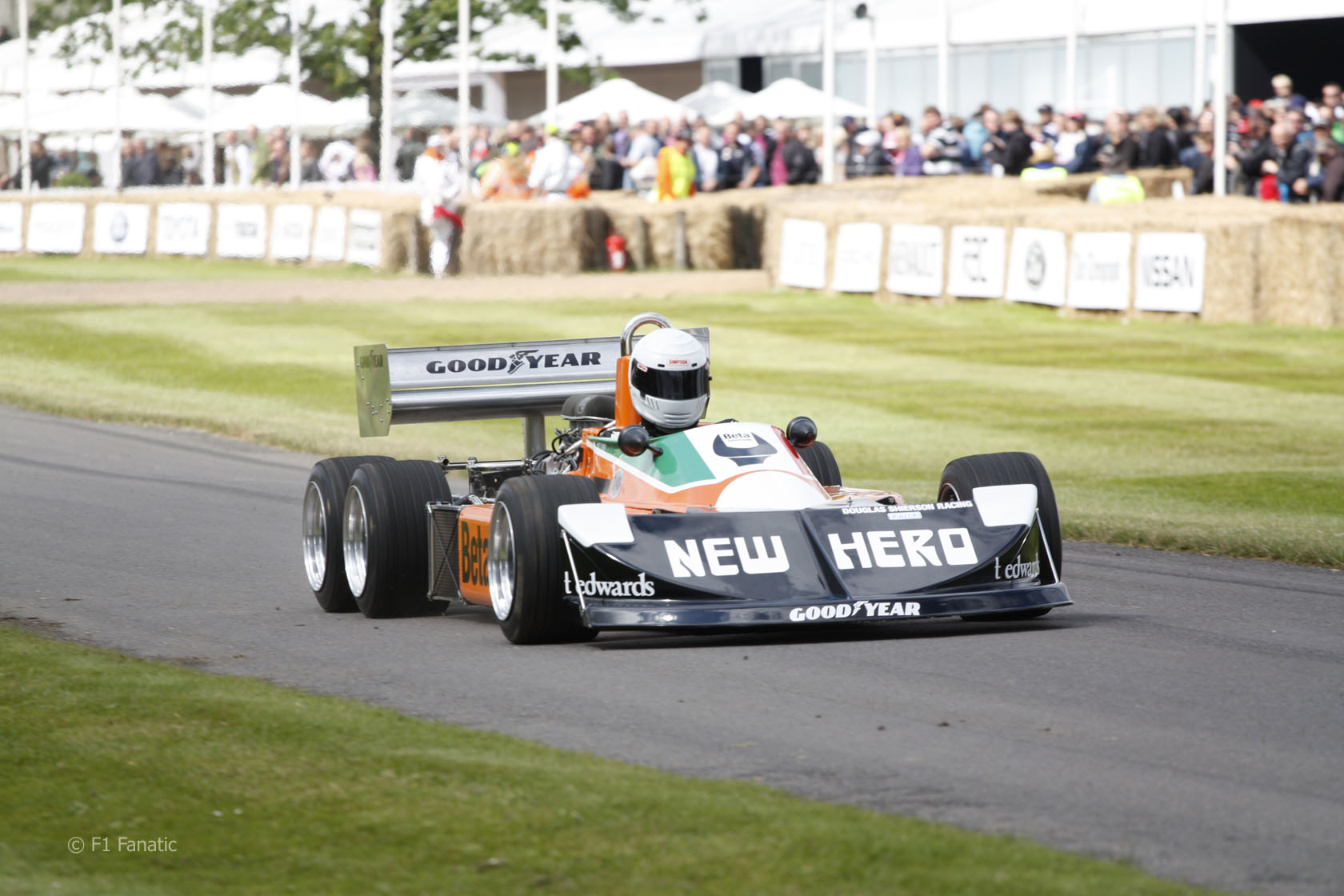 There’s a trio of especially unusual F1 cars on display at this year’s Goodwood Festival of Speed. They all have one thing in common – or, rather, two things: a pair of extra wheels.

The Tyrrell P34, Williams FW08D and March 2-4-0 are among the few F1 cars ever to be built with six wheels. Of the trio, the Tyrrell was the only one which was ever raced. It was also unusual in that it had its extra pair of tiny wheels at the front of the car.

Tyrrell campaigned the P34 in 1976 and 1977. Although driver Jody Scheckter never liked the car, he did score its sole win in the 1976 Swedish Grand Prix at Anderstorp. He took over the lead when Mario Andretti’s Lotus failed and led home team mate Patrick Depailler for a 12-wheeled one-two.

Tyrrell dropped the P34 after 1977, partly because of difficulty obtaining suitable tyres for the four tiny front wheels that were of similar specification to the latest rubber available to teams with conventional cars.

In its final race, the 1977 Japanese Grand Prix, Depailler finished third but team mate Ronnie Peterson was involved in a terrible crash with Gilles Villeneuve which killed two spectators.

Late in 1976 March seized on the six-wheeled concept but put the extra tyres at the back of the car, intending to improve traction. The resulting car, dubbed the 2-4-0, was tested by Howden Ganley.

A shortage of funds meant March never raced the car in Formula 1, but it did compete successfully in hillclimbs. The 2-4-0 is the only one of the trio being driven up the hill this weekend.

At least one other team experimented with a six-wheeled configuration around this time. In 1977 Ferrari bolted two pairs of front wheels onto either side of the rear axle of one of its F1 cars, calling it the 312T6, but never raced it.

Niki Lauda and Carlos Reutemann tested the car. The latter crashed it at Fiorano, the car bursting into flames. The design was most likely an exercise to evaluate the viability of the concept – in the configuration it was built it likely would have exceeded the maximum width restriction introduced in 1976. Williams seized on the ‘four at the rear’ idea and built two six-wheelers along these lines in the early eighties.

The first was based on the FW07 and the second, the FW08B, set some impressive times in testing. The team intended to race it in 1983 but the FIA introduced rules banning six-wheelers ahead of the season.

That the configuration is no longer allowed is probably for the best: having two extra tyres to contend with would reduce McLaren’s chances of completing a successful pit stop to zero.

Six-wheeled F1 cars at the 2012 Goodwood Festival of Speed