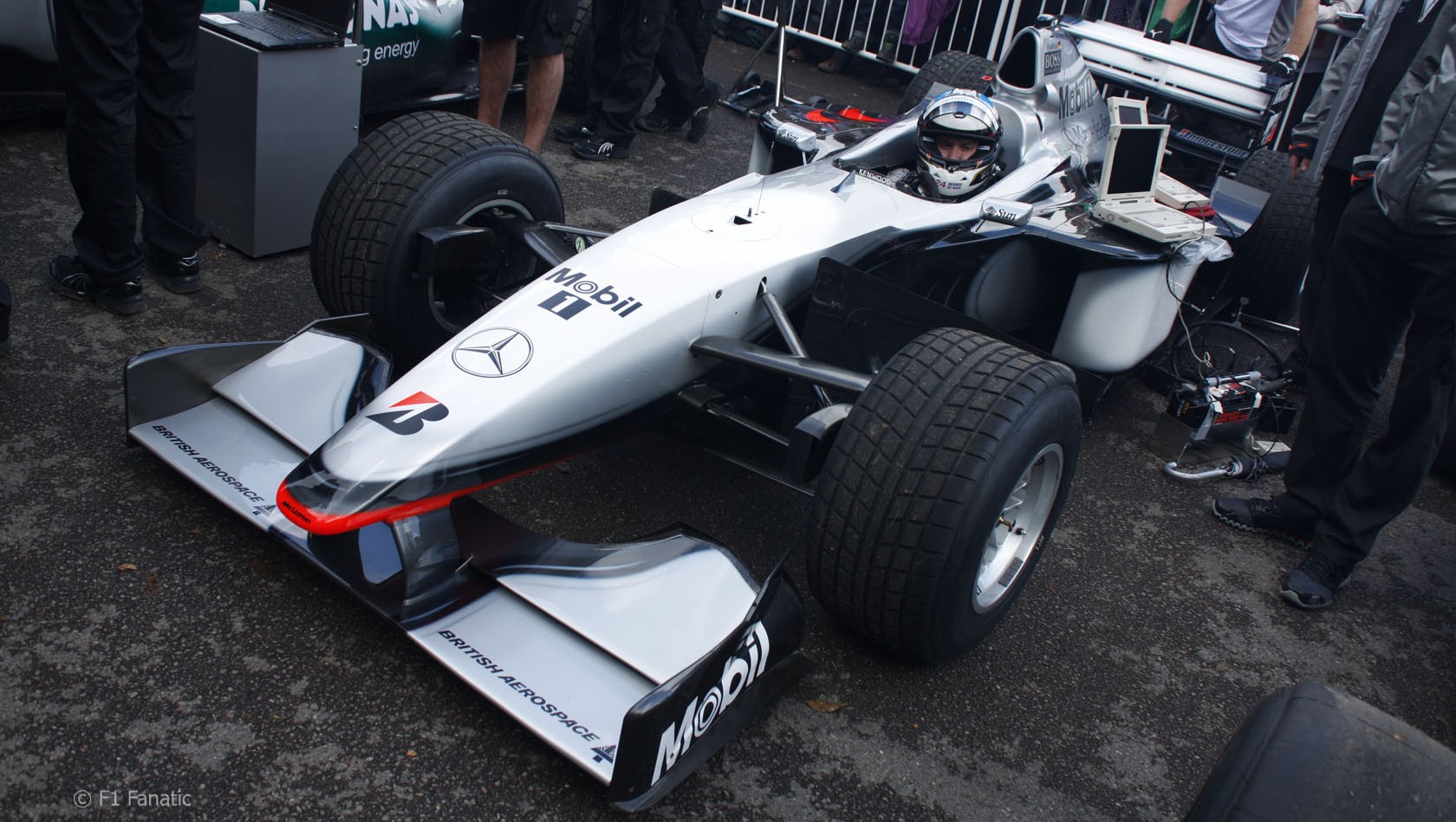 If recent experience has taught us anything, it’s that the combination of a change in the aerodynamic rules offers the perfect chance for a designer of Adrian Newey’s calibre to create a truly exceptional machine.

His Red Bull RB5 hit the sweet spot in 2009 (double diffuser notwithstanding) and its successors have been the benchmark in F1 ever since.

So it was with Newey’s first creation for McLaren in 1998. Having left Williams and been placed on ‘gardening leave’ he had plenty of time to contemplate F1’s change to narrower cars and grooved tyres. In defiance of superstition, his creation was dubbed the MP4-13. McLaren made sure science trumped irrationality by investing 12,000 man-hours into clawing back the downforce taken away by the rules change.

The MP4-13 was a classically undramatic but hugely effective Newey creation. Its most famous gizmo – a third pedal in the driver’s footwell which allowed either of the rear brakes to be independently controlled – was not new: it had already been raced on the 1997 car.

So the team were somewhat surprised when it was banned after Ferrari protested it prior to the second race of the season in Brazil. It didn’t take a cynic to surmise that McLaren’s crushing dominance in the season-opener at Melbourne might have had something to do with it.

Mika Hakkinen and David Coulthard won by a lap, despite Hakkinen accidentally pulling into the pits when he didn’t need to. Coulthard inherited the lead due to Hakkinen’s blunder and, in a move he later regretted, backed off and let his team mate re-pass him.

Despite the banning of what McLaren called its asymmetric braking system, Hakkinen and Coulthard finished one-two at Interlagos by a minute.

One year on from the team’s first win with Mercedes power, the FO110G V10 was a match for anything the opposition could muster. The McLarens blasted through the speed trap at the old, high-speed Hockenheim at up to 356kph (221mph).

McLaren’s 1998 success was also owed to a well-timed switch from Goodyear to Bridgestone tyres. The American company was dissatisfied with the FIA’s imposition of grooves in the tread the reduce cornering speeds and abandoned the sport at the end of the year.

But they did respond to Bridgestone’s dominant start to the season, supplying wider front tyres for the third race which brought McLaren’s rivals Ferrari into the hunt. This began a season-long contest for the drivers’ championship fought out between Hakkinen and Michael Schumacher.

With two races to go, the pair were tied on points. Hakkinen produced a superb performance at the Nurburgring to win having been behind the two Ferraris.

At Suzuka – a Newey track if ever there was one, just ask Sebastian Vettel – Hakkinen led every lap from pole position to win and deliver the world championship.

McLaren also clinched the constructors’ championship, a feat which, remarkably, they have not repeated since.

The McLaren MP4-13 has a special place in the history of the Goodwood Festival of Speed for two reasons. It set the record time for climbing the hill and brought an end to F1 cars competing in the hillclimb.

In 1999 the team’s 22-year-old test driver Nick Heidfeld was tasked with taking the car up the hill. As he pulled up at the start gantry McLaren’s Martin Whitmarsh leant into the cockpit and told him, “be careful, don?óÔéĽÔäót do anything silly… but just make sure you?óÔéĽÔäóre quickest.”

He certainly got the last part right: 41.6 seconds later Heidfeld was at the top of the hill, having ascended it at an average speed of more than 160kph (100mph):

After that he went to see Lord March, the event organiser, and suggested that perhaps it was too dangerous for F1 cars to attempt the hill flat-out. Since then, they haven’t – at least, not officially…