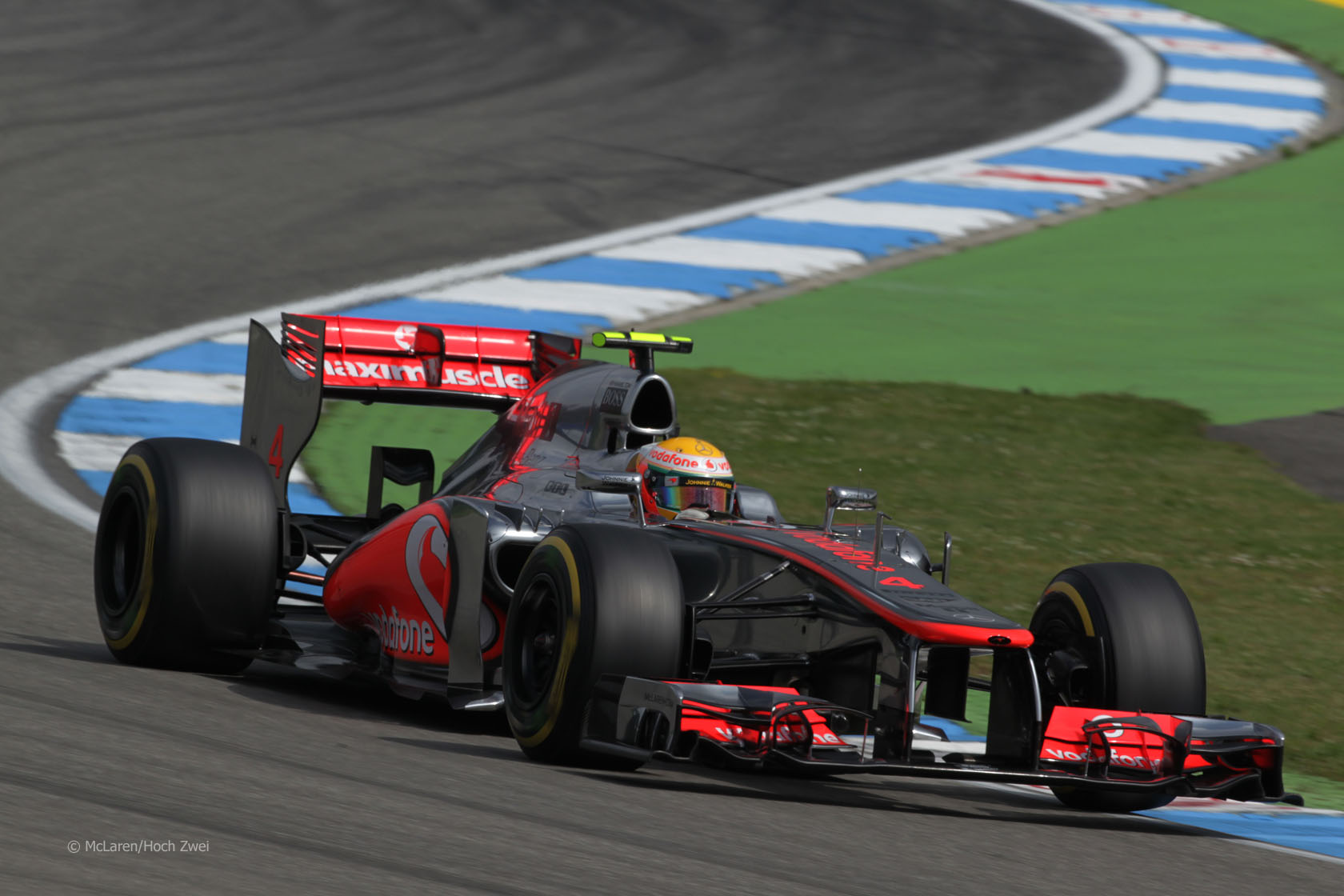 Fernando Alonso starts from pole position for the second race in a row.

“McLaren was a bit quicker than everyone else in the dry,” said Alonso after qualifying. “So I expect a strong race from them tomorrow.”

As happened on F1’s last visit to the Hockenheimring, Fernando Alonso and Sebastian Vettel share the front row of the grid. But this time it’s Alonso on pole position.

Last time Vettel swerved across the track to keep Alonso behind – and in doing so let Felipe Massa through into the lead. As we saw at Silverstone, Alonso has no qualms about using such tactics, and Vettel can expect immediate attention from the Ferrari if he makes a better start.

Hockenheim has an unusual first corner with a vast tarmac run-off on the outside which drivers often use to gain an advantage. Massa did so at the start in 2010 and escaped attention from the stewards.

From a standing start turn one is taken flat-out – the drivers don’t get on the brakes until turn two, and the jostling for position usually continues on up to the Spitzkehre hairpin and beyond on the first lap.

If lap two begins and Alonso isn’t leading it’ll be a first – he hasn’t lost a place on the first lap all year. But Michael Schumacher, who starts third, hasn’t gained a place in the last four races.

The start is especially important for those needing to make progress from lowly grid positions. Keep an eye on Lewis Hamilton and, much further back, Romain Grosjean and Nico Rosberg.

After two days punctuated with occasional, sharp showers, tomorrow is expected to be dry and warm. Track temperatures peaked at 29C in final practice but should be even warmer than that tomorrow.

The limited dry running will mean teams have to feel their way with strategy a bit. “Not all of us have done runs on heavy fuel,” said Sebastian Vettel. “I think the McLarens did but I don’t think Ferrari and us did this morning, so we will see, but it shouldn’t be a big problem.”

Lewis Hamilton indicated that, despite McLaren’s poor qualifying, they could be in a strong position for the race: “We?óÔéĽÔäóre in a better position for tomorrow: although we?óÔéĽÔäóre not starting from the best positions, our car certainly looks better in the dry and, with dry weather predicted tomorrow, I definitely think we can have a good race.

“On Sunday, I plan to hunt everyone down from behind. The great thing at Hockenheim is the great big DRS zone along the back straight ?óÔéĽÔÇŁ so hopefully Jenson [Button] and I will be doing lots of overtaking there tomorrow.”

Lotus also have high hopes for their performance in the race. Track operations director Alan Permane Tweeted: “I keep reading about how well others are going to do tomorrow… Here’s a prediction for you: Kimi [Raikkonen] will be on the podium…”

Hockenheim has usually been a track where drivers can pass quite easily. The DRS zone leading into the hairpin should make it even more straightforward.

Another feature of practice was that the soft tyre seemed to offer little of a performance advantage over the medium. This will most likely lead teams towards starting on the soft and attempting to run the race with two stops for medium tyres. Because Q3 took place in wet conditions, all the drivers have a free choice of tyres for the start of the race.

Here’s all the data from qualifying.