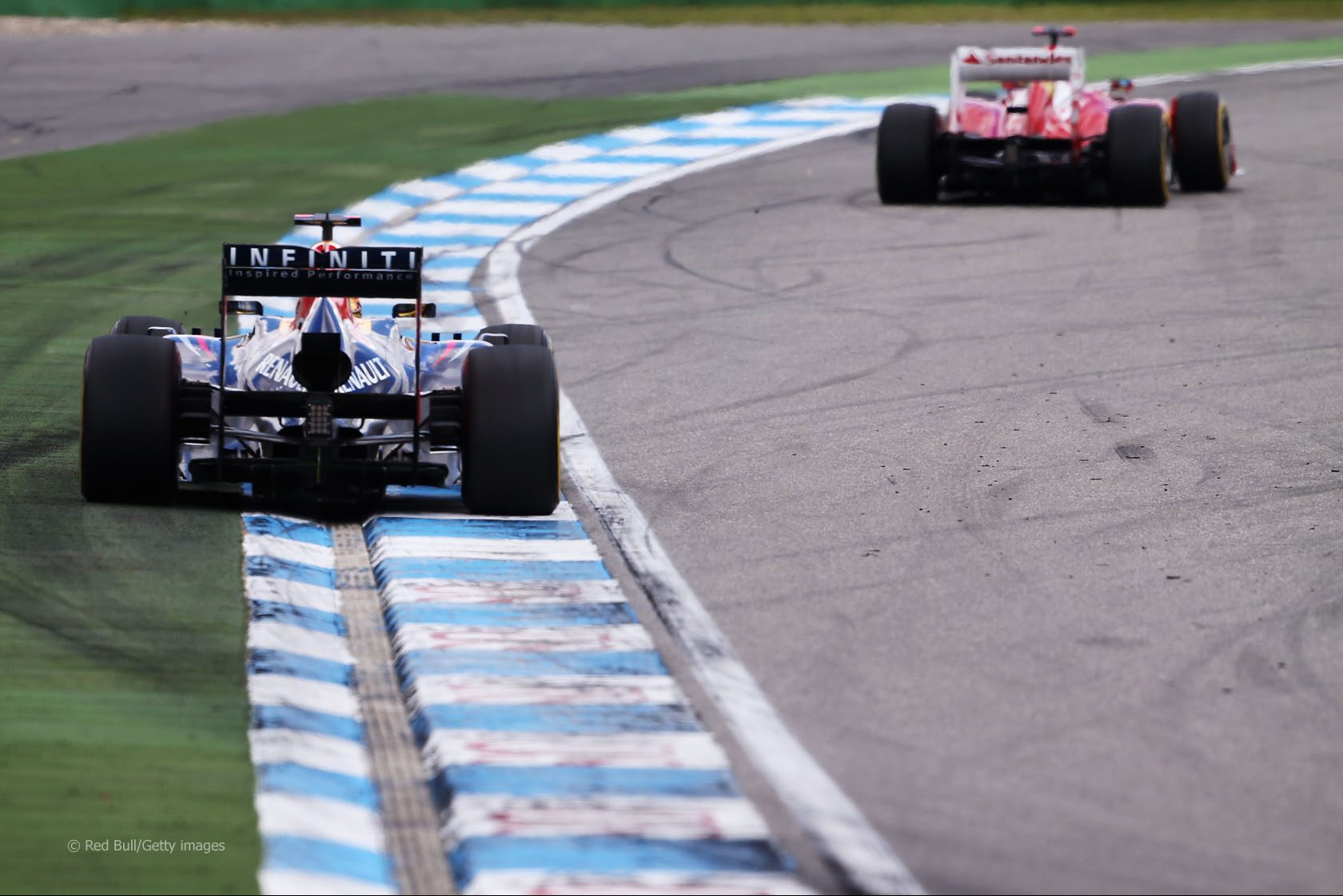 The FIA appears to have finally woken up to the necessity of preventing drivers from abusing the limits of the track.

Sebastian Vettel’s penalty for passing Jenson Button on a stretch of run-off was an encouraging sign that the FIA have finally taken notice of the problem.

While the advantage gained by cutting the inside of a corner is self-evident – it makes the track shorter – the potential benefit of going off on the outside of a corner has sometimes been underestimated.

In the days when circuits were bordered by grass and gravel drivers rarely considered going off the track deliberately. But the increasing use of tarmac run-off has presented drivers with opportunities to use the outside of corners to dodge around rivals who are defending their position on the track.

Hockenheim was one of the first tracks to adopt extensive tarmac run-off when it was remodelled in 2002 and, unsurprisingly, it didn’t take drivers long to start exploiting them.

Michael Schumacher used the tarmac border to get past Jarno Trulli’s Renault during the 2003 race:

The move went unpunished and so did a string of similar moves by others in the years that followed.

The 2007 renovations at Spa added more off-track tarmac and in 2009 there were two particularly blatant examples of it being abused: Kimi Raikkonen passed at least two cars on the first lap using it (which provoked much debate in the comments) and Adrian Sutil took Luca Badoer at the exit of Pouhon also by going onto the tarmac outside the corner.

The first race of last season saw another two examples of drivers going off on the outside of a corner to overtake a rival. I wrote a comment piece at the time arguing that the stewards had a blind spot for drivers gaining an advantage in this way.

Encouragingly, they now appear to be tackling the problem. As reported here, FIA race director Charlie Whiting addressed the subject prior to the race in a letter to competitors and stewards, saying the latter should “use their discretion in cases where it is not entirely clear whether or not a driver has gained any direct or immediate advantage”.

The same document stated: “Any driver leaving the track, (i.e. no part of his car remains in contact with the track in accordance with the current regulations), may re-join the track but without gaining an advantage.”

Vettel’s subsequent move on Button may have been a near carbon-copy of Schumacher’s on Trulli nine years earlier, but this time the stewards did not turn a blind eye. They handed him a post-race penalty which cost him three places.

He will be ruing not taking the opportunity to hand the position back to Button on the track and having another go at overtaking him properly. And other drivers will have taken notice of the precedent.

However overdue it may be, it is encouraging to see the stewards are finally cracking down on F1 drivers abusing the track limits to gain an unfair advantage, even on the outside of corners. It is not hard to see how the input of the recently-introduced drivers stewards may have been of benefit here.

But we should also question why some tracks offer such opportunities for drivers in the first place.

Tarmac may be a suitable surface for run-offs on the outside of fast corners – unlike gravel, cars will not dig into it and flip at speed. But it is surely not necessary, even on safety grounds, for the acceleration zone at the exit of a slow hairpin to be bordered by tarmac?

117 comments on “F1 finally cracks down on track limits abuse”