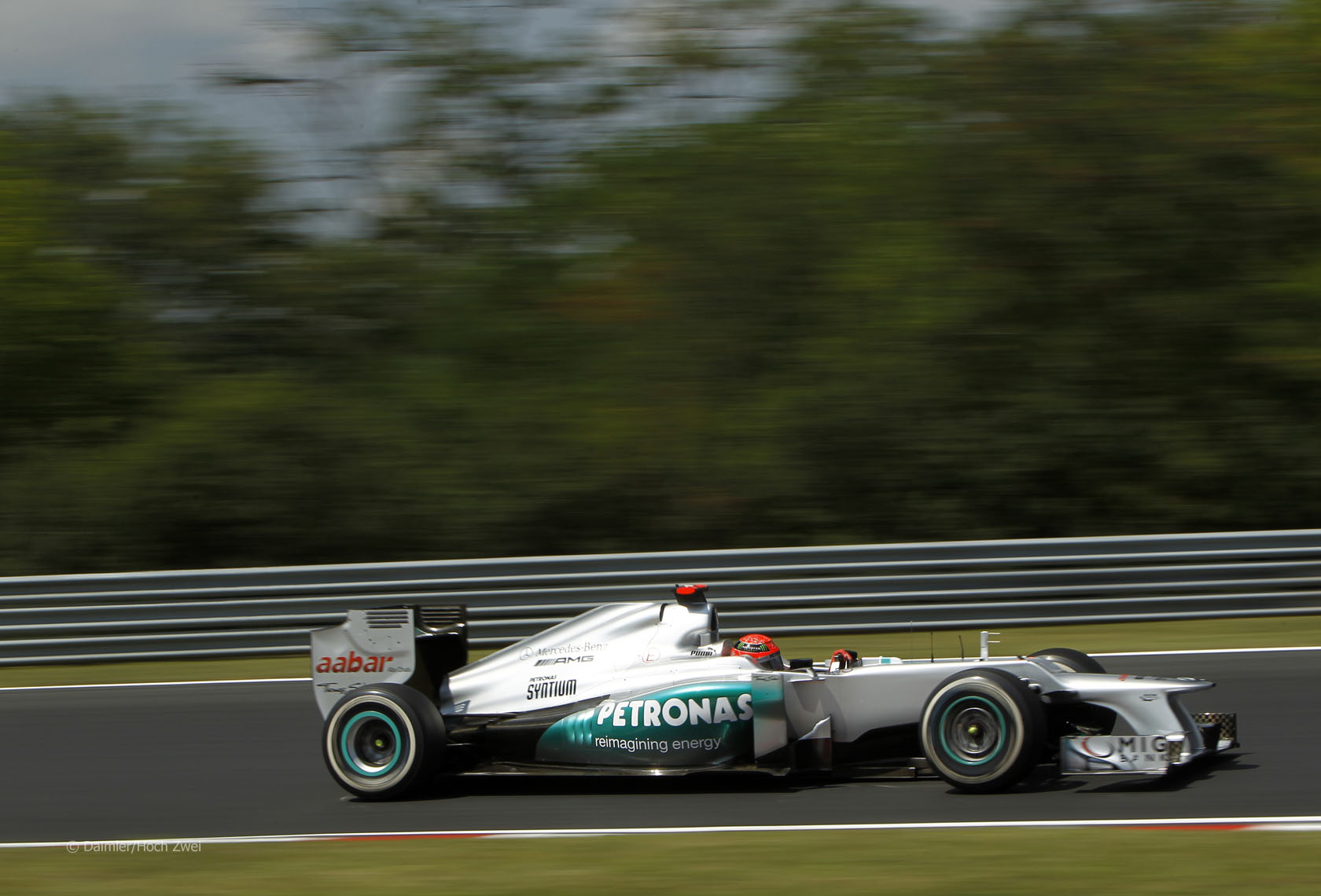 In the round-up: Michael Schumacher says his crash in second practice was “a bit strange”.

Remember to enter your predictions for the top five finishers in the race for your chance to win F1 prizes this weekend.

Michael Schumacher: “I just ran out of road…” (Adam Cooper)

“I just ran out of road, locked up and couldn?óÔéĽÔäót stop the car anymore. I don?óÔéĽÔäót think it was aquaplaning. It was just one of these unusual things… A bit strange but nevertheless we have to put a cross on it and forget about it.”

Set-up a struggle for Grosjean (Sky)

“The good thing is that we’ve been sitting down with my engineer and I think we’ve understood a few things as to why we may struggle with this.”

“In drivers briefing. Speaking about Hockenheim issues and then Hungary. We speak mostly about safety and rules e.g. today where [Sebastian Vettel] took Jenson [Button] last race, will now be changed to AstroTurf to stop that from happening.”

“In the example of Red Bull in Germany, if you have less torque output for a given throttle opening, you are reducing wheelspin, which increases tyre life, but getting more downforce because the throttle will be further open for less torque delivery.”

“Driver pedal maps can change as a function of the circuit characteristics. For example, drivers might want more precision during initial pedal application at Monaco. Similarly, some drivers insist on a wet-weather pedal map.”

Toto Wolff: “Flattening out torque curves is something that every team looks at, obviously, and the reason why we have not been taking up that solution is because we didn’t make it work as Red Bull have. We have no coanda exhaust and this is why it’s not as beneficial for us as maybe for others.”

“The Cologne-based operation is hoping to provide a supply of customer power units for the new 1.6-litre turbo engine V6 era, but it has been forced to cease work due to a funding issue.”

Formula One turnover fuelled by television fees (The Telegraph)

“F1 [pays] around 4% tax despite 14 of the 30 companies in the group being located in the UK where the main rate of corporation tax is 25%.”

“Talking to the German newspaper Die Rheinpfalz yesterday, Ecclestone revealed he was looking into buying the circuit. However, he refused to comment on how much he is willing to offer and also ruled out the possibilities of hosting a grand prix at his own expense or waiving the Formula One sanctioning fee.”

“Fernando has found in Ferrari the real tool for him to grow. That’s why he comes to Maranello so often. He’s not coming because its compulsory but because he sees Ferrari as a second family.”

“As you know, I am no longer active in racing through the actions of Muermans. He largely made my career by helping me with my sponsorship, especially in F1. He is now trying to destroy it because he is in financial trouble himself.”

At half-time, who’s in driving seat and who’s eating dust? (The Independent)

“Q. Will Michael Schumacher retire?
A. Almost certainly not. Having been pulped by team-mate Nico Rosberg in 2010 and ’11, the veteran multi-champ is back on the pace and more often than not running ahead of his young compatriot in a car that better suits his aggressive oversteer style.”

It seems F1 can’t escape the rain at the moment but Gez is hoping for a dry qualifying session:

This is going to be a close battle in qualifying, hopefully if it?óÔéĽÔäós dry.

The last full dry qualifying was in Valencia and that was very close! I believe Hamilton will get pole if dry. His pace was very good, but I expect the Lotus to be strong in the heat, Alonso and maybe Massa could be strong, and I expect Red Bull to be up there.

The McLaren, Lotus, Ferrari and Red Bull drivers could be first or all the way down in eighth in my opinion
Gez

The Williams pair of Juan Pablo Montoya and Ralf Schumacher completed the podium.

Here’s Montoya putting the new bits of track to use as he took fourth place off Kimi Raikkonen and demonstrating how Sebastian Vettel should have tackled Jenson Button: