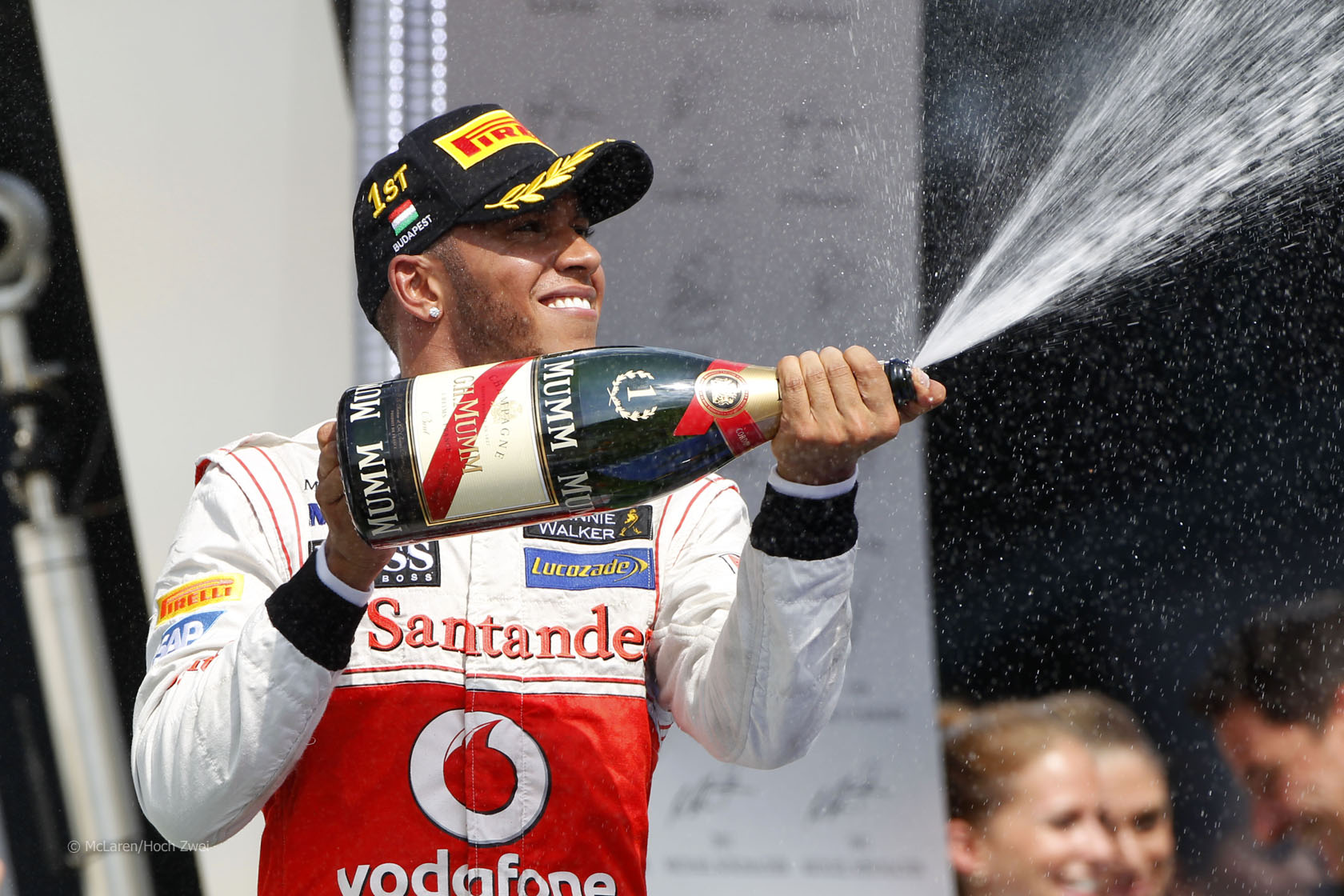 But Kimi Raikkonen scooped over 30% of votes as he claimed second in the poll.

The top three was completed by Bruno Senna for the second time this year.

Here’s what F1 Fanatic readers had to say about the top drivers of the Hungarian Grand Prix weekend.

In the upgraded MP4-27, Hamilton was the fastest driver in every session bar Saturday morning practice. He ruled qualifying from the start and claimed his third pole position of the year.

This turned out to be crucial to help him secure his second win of 2012 and revive his championship hopes by closing the gap in the standings to leading Fernando Alonso to 47 points.

Hamilton, easily. Fastest in all but one of the practice sessions, fastest in all three qualifying sessions, led [almost] the entire race from pole, and despite having a lot of pressure applied on him from Raikkonen and Grosjean, kept his composure and made that win look effortless.
Driftin

Lewis Hamilton for me, practice, qualifying and the race – just superb!
Gill Parry

Another clear decision: Hamilton. On it all weekend. From FP1, he nailed everything together, and by qualifying, he was far ahead of the competition.
Fer no. 65

Lewis Hamilton for me. Stuck it on pole by quite a large margin and drove a great race. It was just the result he needed to mount a championship charge after the summer break.

He sounded calm in his car on the team radio and his pace versus Buttons pace shows how well he did.
Smifaye

I think that Hamilton deserves it, he was fast from Friday to Sunday.

Incredible performance Saturday, managed the tyres well in the race, his leadership was really never in doubt.
Lorenzo The race didn’t get off to a great start for Raikkonen: having been out-qualified by Grosjean he was passed by Alonso, who he spent the first stint behind.

But from that point on he showed great pace and moved up to second place, narrowly leaving the pits in front of his team mate. He chased Hamilton in the dying stages of the race, but was never able to get close enough to try an overtaking move for the win.

Raikkonen got my vote. I think Lotus were the best team over all but they just couldn?óÔéĽÔäót get it done on that particular circuit, which is understandable.

It was either going to be Grosjean or Raikkonen for me, but Raikkonen had to put up with problematic KERS and Grosjean just had a couple of dodgy laps behind Hamilton that maybe cost him a better chance at 25 points.
AndrewTanner

Raikkonen made a fantastic race, was always on the top places in practice and qualifying and recovered a 15s disadvantage to the leader mainly in the second stint, and on a “normal” track he would have won this race.
Pedro Costa Got to Q3 for the first time this year and although he was out-qualified by Maldonado for the eighth time, he passed his team mate after the start.

Senna stayed in the top ten and managed to keep Button and Webber behind him with the Red Bull driver staying behind the Williams right until the chequered flag. He scored his second best race result of the year and arguably his strongest performance of a weekend so far.

Senna came back from a bad period and showed racecraft in defending from Button, driving just that other line in turn two to four to make sure Button could do nothing. And he did well even after giving his car to Bottas again.

I voted for Senna.
Verstappen

I voted for Bruno Senna. It?óÔéĽÔäós hard to know what the Williams car was really capable of this weekend but he impressively outpaced Maldonado, who?óÔéĽÔäós often lacked intelligence but never the speed.

Moreover, Senna managed to leave two championship contenders’ cars, one Red Bull and one Ferrari, behind him. It’s too early to declare this a turning point in his career but the whole weekend must have been very encouraging for Bruno.
Girts

I voted for Bruno Senna. His drive was first class and he withstood massive pressure from Button and Massa.
GeeMac

All of the chosen drivers have already been in the top three: Hamilton three time, while Raikkonen and Senna once each. Yet, the Brazilian driver is the only one of them who is still to win the poll.

16 comments on “Hamilton voted Hungarian GP Driver of the Weekend”