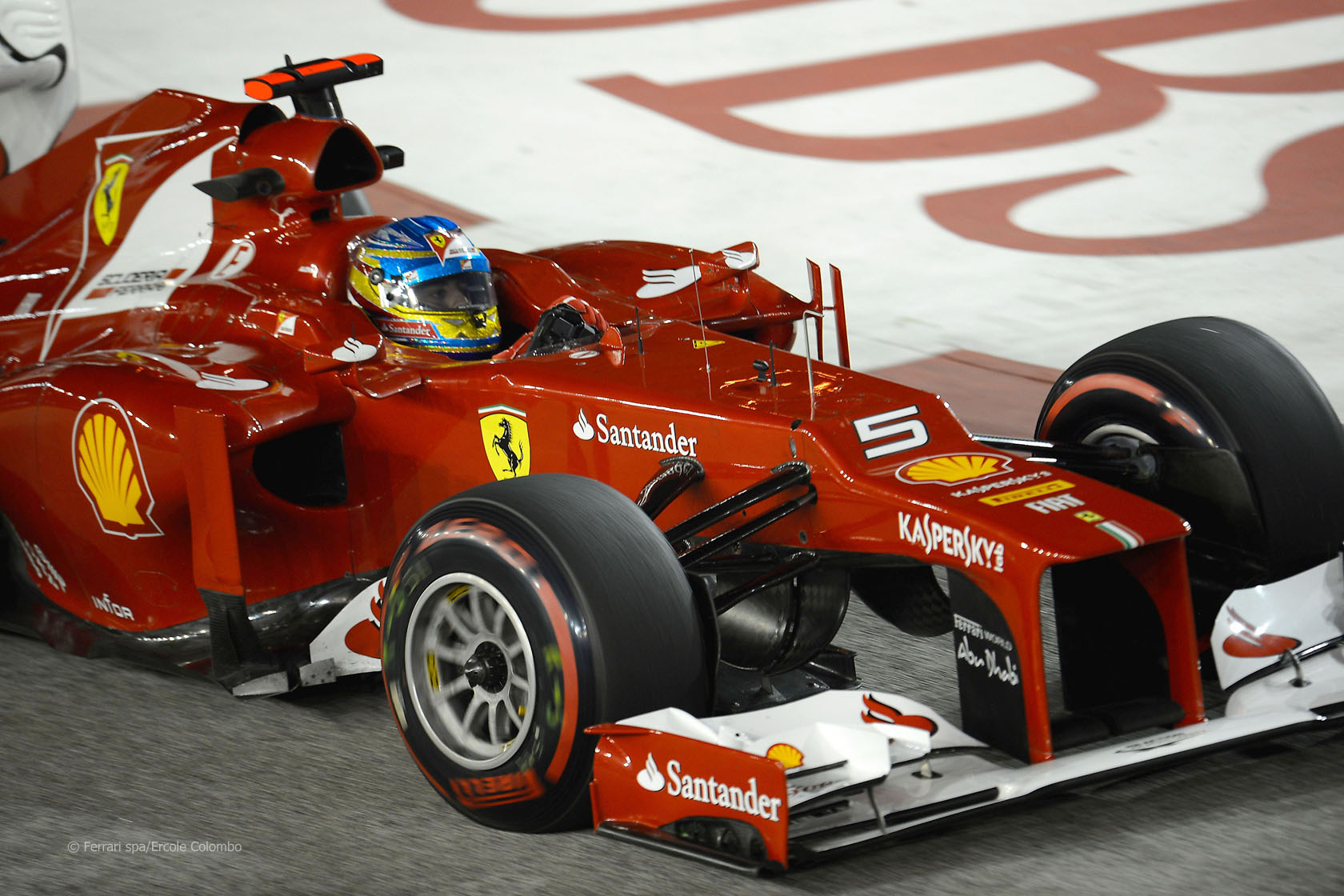 Fernando Alonso’s assessment after the first two practice sessions in Singapore was that Ferrari are not as competitive as they were at the last race.

Alonso was able to take the battle for pole position to the McLarens at Monza but the silver cars and Red Bull appeared to have more pace than Ferrari during practice.

Sebastian Vettel headed both Friday practice sessions – the first time Red Bull have done so all year. But he was cautious on their chances.

“It?ů‘ťľ‘šůs still Friday and today?ů‘ťľ‘šůs results are not so conclusive as some drivers got stuck in traffic, etc…” said Vettel. “Most important is that the car seemed to work on either tyre, so we go from there.”

Here’s the data from the first two practice sessions:

According to Pirelli the super-soft tyre is around 1.5s fastest per lap than the soft tyre. This means they will be in high demand during Q1 and Q2, which in turn will leave drivers with fewer fresh sets for the race.

Last year some drivers went to considerable lengths save fresh sets of the softer tyres in qualifying : three drivers in Q3 elected not to set a time at all.

Rain before first practice today meant the track was especially ‘green’ to start with. That will improve as the weekend goes on, but high tyre degradation is likely to play a vital role in the race with drivers hedging between two- and three-stop strategies.

It was clear from the long runs that the super-soft tyres were going off particularly quickly. “It?ů‘ťľ‘šůs tough in these temperatures, especially on the long runs, but to be honest I think everyone?ů‘ťľ‘šůs struggling a bit too,” said Hamilton.

“We?ů‘ťľ‘šůre looking at set-up and balance to improve our long-run pace, but today?ů‘ťľ‘šůs performance isn?ů‘ťľ‘šůt a bad place from which to start.”

Radio chatter from the high-fuel runs

Here are some of the team radio messages from during the race-fuel stints. See F1 Fanatic Live on Twitter for more:

Massa says he's struggling with the rears. Smedley tells him to pit. #F1

Hamilton told: "If you can do one more timed lap, stay out please, see how bad these tyres get." #F1

Vettel gets a similar message: "Just one timed lap, you're not good for traffic." #F1

Hamilton reckoned his mistake at the last corner on his fastest lap cost him half a second. That plus track evolution means there’s good reason to expect McLaren will be in the fight for pole position with Red Bull.

Alonso who ran a new high-downforce rear wing on Friday, was more pessimistic about his team’s chances: “The first impression is that we are not as competitive as we were in Monza, two weeks ago.”

“We still lack a bit of performance on tracks like this one, where you need maximum aerodynamic downforce.”

Timo Glock says Singapore is his favourite track and he managed to out-pace both the Caterhams on Friday practice. But Heikki Kovalainen had to abandon his effort at a flying lap due to Bruno Senna’s spin.

Note that the Singapore speed trap is not the one where the highest speeds are recorded – that normally comes at Intermediate 1, the data for which is not available for Friday. Singapore typically sees some of the lowest top speeds of the year.

25 comments on “Ferrari not as competitive in Singapore, says Alonso”