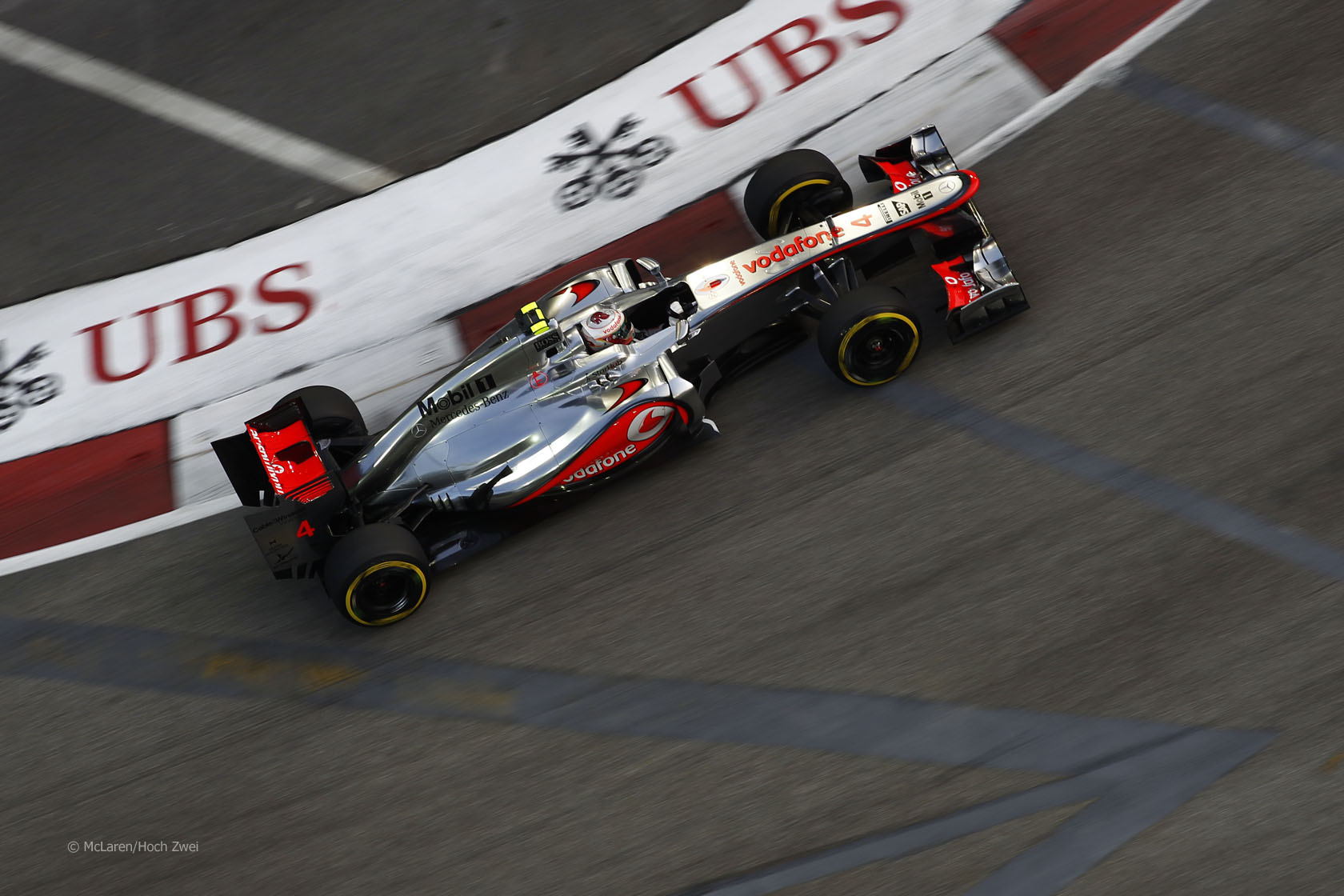 The last three Singapore Grands Prix have all been won from pole position.

That puts Lewis Hamilton in the best position for this weekend’s race. But with tyre degradation expected to be high and the ever-present threat of a disruptive safety car appearance, he can afford to take nothing for granted.

With a short run to the first corner and little grip on the dirty side of the track, the pole sitter has to make a real mess of his start to lose the lead before turn one at Singapore. That’s exactly what happened to Luca Filippi in Saturday’s GP2 feature race.

Pole position is a vital advantage at Singapore and Hamilton will be eager not to waste it. He did just that at Melbourne earlier this year, handing victory to his team mate, but his recent starts have been much better.

He will be wary of the feisty Pastor Maldonado starting alongside him. Hamilton has been hit by the Williams driver once already this year.

With Fernando Alonso starting fifth, Hamilton has an opportunity to make major gains in the championship – one he will be determined not to miss out on.

The top eight drivers will all start the race on super-soft tyres. These offer a significant performance advantage over the soft tyre but they don’t last long. Last year the front-runners began pitting around lap ten and we could see a similar situation here.

The drivers who qualified in the top six positions all made three scheduled pit stops while several of those behind opted to make two. After getting the super-soft tyre out of the way, the soft was the preferred tyre for most of the race.

Pirelli motorsport director Paul Hembery suggested the super-soft may be more widely used this year: “With such a speed advantage from the super-soft tyres, the teams were looking after those in particular. We saw them being used for multiple runs, so that the drivers can save new sets for the race.”

However the teams remain unsure how long they will last. Vettel said: “Hopefully by the time we pit we have a big gap to the guys who are maybe on a different strategy. I think it’s difficult to know now how long we will be able to stay out.”

Last year’s race was also shaped by the appearance of the safety car halfway through. All the teams will be alert to the potential for the safety car to disrupt their plans as there hasn’t been a Singapore Grand Prix without one yet.

An early safety car appearance would be bad news for those at the front, as it would mean them falling further back into the pack when they emerge from the pits. Overtaking at Singapore is tricky, even with the advantage of fresher tyres and a DRS zone.

Had Sebastian Vettel been able to replicate his Q2 time in Q3, he would be starting from the front row.

“I think the pace was there to do better than what we did in Q2,” said Vettel. “But in Q3 we just couldn’t pick and in the end I was even struggling to repeat the lap I did in the beginning.”

Kamui Kobayashi missed out on Q2 having struggled with his set-up: “We have tried everything but could not get rid of the huge oversteer.

“I have no confidence in the car and this is really the last thing you want to have to cope with on such a street circuit.”

Button was not as happy with his McLaren’s set-up as his team mate: “I didn?óÔéĽÔäót really feel comfortable with my car, the rear went away from me quite quickly, and I struggled to look after the tyres over a lap.”