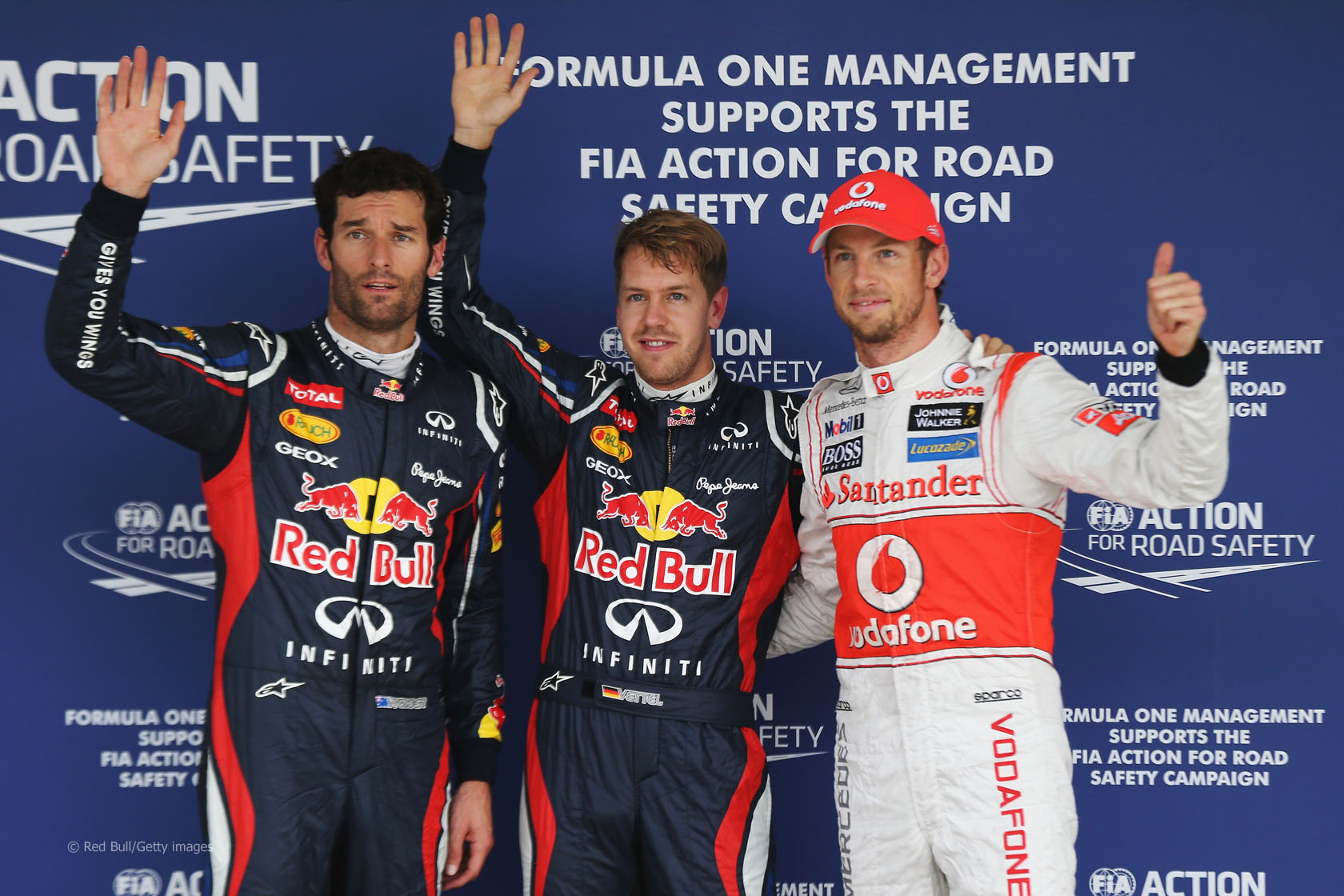 Sebastian Vettel claimed pole position for the Japanese Grand Prix at Suzuka for the fourth year in a row.

The reigning champion was rarely challenged during qualifying and heads an all-Red Bull front row with Mark Webber taking second.

Jenson Button took third but his gearbox change penalty will promote Kamui Kobayashi to third on the grid at his home race.

Vettel led the way at the beginning of Q1, a 1’32.608 enabling him to stay in the pits without using a set of soft tyres.

Most other drivers had to use a set of the faster compounds to ensure a place in Q2, including the Lotus pair.

Nico Hulkenberg made a late start to qualifying after the team completed repairs to his car following his crash in final practice. But a 1’32.828 comfortably got him into Q2.

Another Mercedes-powered driver was having a less comfortable time. Michael Schumacher left the pits late and ended up needing a final flying effort to secure his progression. He made it, after a superb lap on hard tyres secured 16th place.

Jean-Eric Vergne made it through but not without incurring the wrath of Bruno Senna, who he held up at the chicane. Senna gesticulated angrily at the Toro Rosso pilot.

Vitaly Petrov could only manage 23rd, beaten by both Marussias and Pedro de la Rosa – the HRT driver successfully splitting the two MR01s.

Vettel set the benchmark in Q2 with a lap of 1’31.501. Button came closest to begin with but was almost three tenths of a second slower. Behind them was Webber and these were the only three drivers who were not on the track at the end of the session.

Hamilton, fourth, returned for another run having been four-tenths off his team mate with his first run. However he was able to return to the pits as he only fell as far as eighth as others improved.

Alonso produced a 1’31.833 to ensure his place in the top ten but team mate Felipe Massa failed to get through by just two-hundredths of a second. He was knocked out after Romain Grosjean improved his time, joining team mate Kimi Raikkonen in the final part of qualifying.

Neither Mercedes made it through, nor did the Toro Rosso pair.

Red Bull led the running as Q3 began, Vettel setting a 1’30.839. Webber was just two-tenths of a second off his team mate – he was quicker in the first sector but lost time with a lock-up later on the lap.

Button was another two-tenths behind in third, followed by the Lotuses and Hamilton. Alonso, Hulkenberg and the Saubers limited themselves to just one run.

Vettel made a good start to his final effort, immediately finding the time he’d lost in the first sector. But further ahead Raikkonen hit trouble, spinning at Spoon curve.

With the yellow flags out the drivers behind him were required to slow down. Several drivers improved their time after Raikkonen spun, but it remains to be seen which of them had passed the scene before the yellow flags came out – and whether they might received penalties.

The top three held position while Kamui Kobayashi moved up to fourth and Grosjean took fifth. Perez claimed sixth ahead of Alonso with Hamilton only ninth.

But Vettel had no need to improve his time and backed off, cruising into the pits to celebrate pole position at Suzuka for the fourth time in as many years.