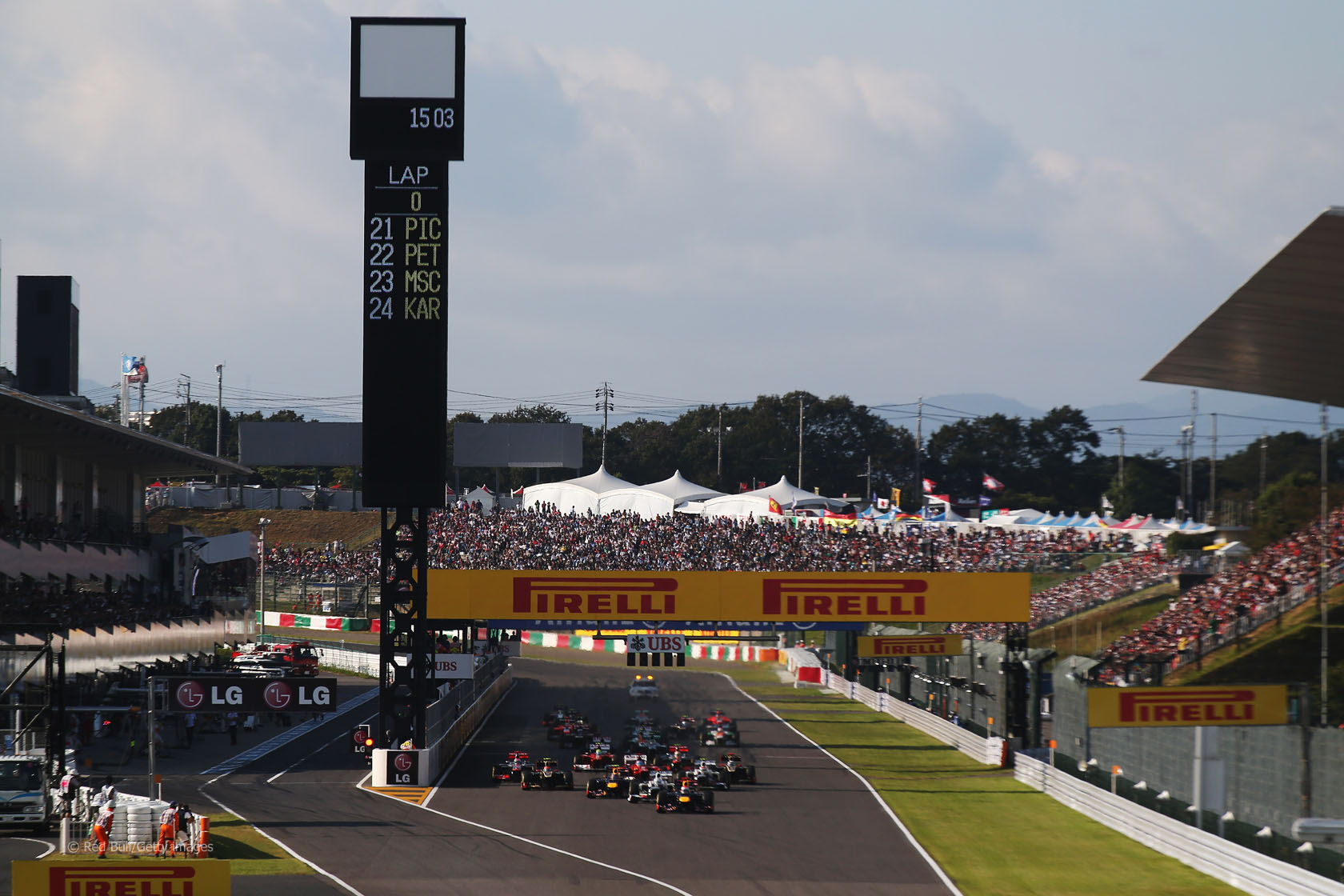 Which F1 driver had the best race weekend in Japan?

Compare all the drivers’ performances below and vote for who you think was the best driver of the Japanese Grand Prix weekend. Sebastian Vettel – Vettel was in imperious form at Suzuka. His qualifying effort was particularly special as he only needed one lap in each of the three parts to get the job done. However he was perhaps fortunate to only receive a reprimand after getting in Alonso’s way at the chicane. From pole he romped home to win by over 20 seconds and even enjoyed the luxury of being able to pit later than his closest rivals. He led every lap to complete the second perfect result of his career.

Mark Webber – Webber was not far off Vettel’s pace in qualifying and was unlucky to be taken out at turn two by Grosjean. Having reversed back onto the track he pitted for new tyres yet didn’t have time to join the safety car queue before the race restarted. In spite of this considerable setback he recovered to ninth, pitting just once more for tyres on the way.

Jenson Button – Qualified third and was relegated to eighth by his gearbox change. But he started well and got past Alonso on the run to the first corner. Elevated to third by the chaos in front of him, he was unable to jump past Kobayashi after suffering gearbox problems around the time of his first stop, which also helped Massa get past him. He finished fourth.

Lewis Hamilton – Felt he’d gone the wrong way on set-up in qualifying and started ninth. But halfway through the race he felt the car improve. “It was a bit of a struggle in the first stint ?óÔéĽÔÇŁ I had a lot of understeer ?óÔéĽÔÇŁ but after a while the car started turning again,” he said. “From that moment on, it felt really good, and I was able to push but it was too late to have much of an effect on the result.” The improvement in his lap times in the middle of his second stint can be seen here. His new-found confidence in the car allied to a superbly quick McLaren pit stop helped him pass Raikkonen for fifth. Fernando Alonso – Was unfortunate to be inconvenienced by Raikkonen’s spin in qualifying and possibly lost more time because of Vettel at the chicane. In between Button and Raikkonen on the run too hard he didn’t leave quite enough room for the Lotus which got onto the grass and spun into him, puncturing his tyre and ending his race.

Felipe Massa – Looked quick in qualifying but missed Q3 for the tenth time this year. The first-lap crashes meant he immediately moved up to fourth, and he jumped Kobayashi and Button at the first pit stop for second. That was enough for his first visit to the podium in 36 races.

Michael Schumacher – Had a crash during practice and started 23rd on the grid due to his penalty from Singapore. As he moved through the field he made an excellent pass on Di Resta but couldn’t find a way by Ricciardo to claim the final point.

Nico Rosberg – Qualified 15th which became 13th after penalties but he retired after being hit by Senna at the first corner.

Kimi Raikkonen – Started seventh having spun during qualifying, delaying several drivers including Alonso. Then had contact with Ferrari at the first corner which put Alonso out. Raikkonen fended off an attack from Perez but had to surrender fifth place to Hamilton. Nonetheless extended his streak of points finished to 12 races.

Romain Grosjean – Out-qualifying Raikkonen on a drivers’ track like Suzuka was impressive. But another first-lap collision left him in the doghouse once again, and on the receiving end of a verbal dressing-down from Webber.

Paul di Resta – Developed a clutch problem on the formation lap which caused a poor start. He finished 12th.

Nico Hulkenberg – Had a minor crash during practice, as did his team mate. The team had to hurry to get his car ready for qualifying, but he repaid their efforts by reaching Q3. However a gearbox change penalty left him 15th on the grid. Moved up to eighth thanks to the first corner chaos, picked up another place from Perez and kept Maldonado at bay. Kamui Kobayashi – With his place at Sauber rumoured to be under pressure, Kobayashi enjoyed a dream weekend on home ground. He claimed third on the grid and gained a place at the start despite having to run wide at turn two. Couldn’t prevent the faster Ferrari of Massa from jumping him in the pits, but Button was never able to try to make a move on him for third, and he duly claimed his first podium finish.

Sergio Perez – The focus of considerable attention following the announcement of his deal to drive for McLaren, Perez appeared to have vindicated the team’s decision when he passed Hamilton in fine style on lap six at the hairpin. But having lost the place in the pits he then threw his race away by spinning while trying to pass Hamilton again: “Lewis went quite late to the inside and I had only room on the outside,” he said. “But it certainly was my mistake.”

Daniel Ricciardo – Lost ninth place to the recovering Webber but held Schumacher off for his third points finish in four races. “I was really pleased to have won that battle,” he said. “It?óÔéĽÔäós always tougher when you are the slower car in a duel, but with good advice from the pit wall on how to use the KERS to defend in the DRS zone, I managed it.”

Jean-Eric Vergne – Was penalised three places for holding up Senna in qualifying. Fell behind Kovalainen at the start as he had to avoid Rosberg’s spinning Mercedes. This cost him time in the first stint. He passed the Caterham in the second stint to finish 13th. Pastor Maldonado – Kept his nose clean again and finally scored his first points since winning in Spain with eighth place.

Bruno Senna – As the field braked to avoid the Webber/Grosjean collision at the start Senna ran into the back of Rosberg, for which he was given a drive-through penalty. Passed Grosjean in fine style on the outside at the approach to 130R as he recovered to 14th pace.

Heikki Kovalainen – Passed Glock for 11th at the restart and briefly appeared in ninth place during the first pit stops. However he lost places to Vergne and Senna in the middle stint and finished 15th.

Pedro de la Rosa – Impressively out-qualified Pic’s Marussia and Petrov’s Caterham. But couldn’t sustain the advantage over a race distance and was the last running car when the chequered flag came out.

Narain Karthikeyan – Retired when the team discovered a problem with the floor which was deemed a safety risk.

Timo Glock – Had a pre-race drama when he hit a wheel nut in the pits on his way to the grid and thought something had broken on his car. He was 11th during the safety car period having squeezed past Kovalainen in the Esses on the first lap. “I knew that would be short-lived because we were struggling a bit with traction out of the last corner and obviously they have KERS and we don?óÔéĽÔäót,” he said. Kovalainen duly passed him, as did several others, nonetheless he finished just eight-and-a-half seconds behind the Caterham.

Charles Pic – Further off Glock’s pace than usual on a tough track for a rookie. Was in front of Petrov and the Marussias but lost time when he failed to stop properly in his pit box. Retired shortly afterwards with an engine failure.

Who was the best driver of the Japanese Grand Prix weekend?