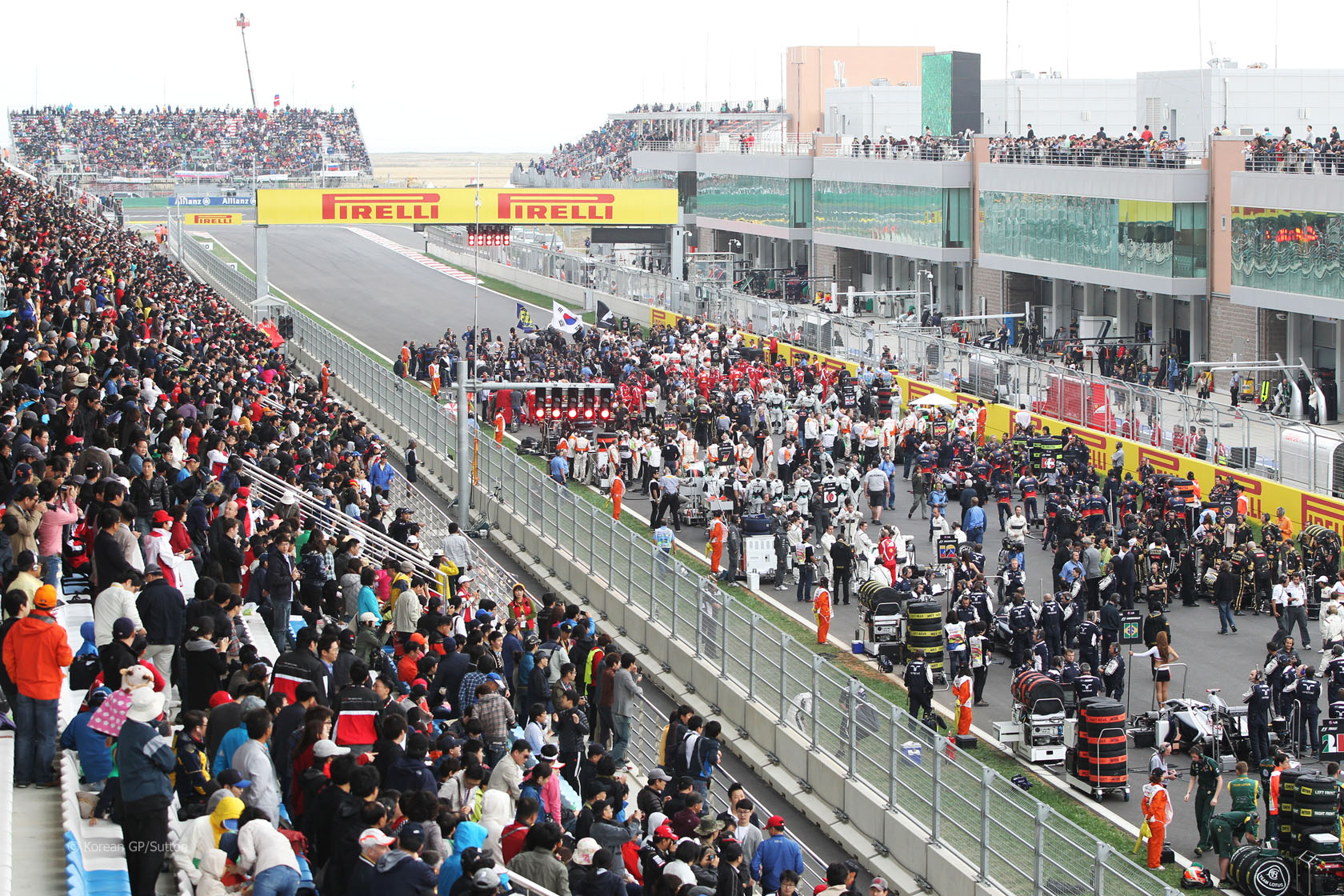 Few readers have made the trip to Korea’s circuit for its round of the world championship.

However the small number that have made it there seem to have had a positive experience of visiting the track.

But with little apparent local interest in the race so far, those who’ve been to it question whether it will be able to hold onto its place on the calendar. Here’s what they had to say about the race. Here’s what two readers who went to last year’s race had to say:

I had a great time in Korea, was pretty nervous about getting there due to the lack of information, but everything went smoothly.

I even shared a ?é?ú30 taxi ride with three others from Gwangju which is a pretty nice city (three hours by train from Seoul) ?óÔéĽÔÇŁ better than what I heard about Mokpo anyway.

The staff were ridiculously helpful, and as most of them are volunteers from the civil service, could speak English without an issue.

As far as the circuit goes, it?óÔéĽÔäós pretty bland as it?óÔéĽÔäós in the middle of nowhere, but there?óÔéĽÔäós a bus running constantly around it so it?óÔéĽÔäós easy to get around (much easier than Silverstone), there?óÔéĽÔäós a lot of vendors selling at reasonable prices and I booked with 50% discount on my ticket so had a covered main grandstand ticket for less than ?é?ú150.

I was even lucky enough to meet some friends of the FIA chief steward so got access to the Paddock on the Saturday, with a tour of the Red Bull garage and watched qualifying in the Mercedes garage.

I think it?óÔéĽÔäós a shame the facility is only used once a year, and that the original proposed developments near it won?óÔéĽÔäót be taking shape.

All in all, probably my best F1 circuit experience, and the race wasn?óÔéĽÔäót half bad either.
Alan (@Dogmop)

Really enjoyed the race, with some really interesting battles along the field. However, there wasn?óÔéĽÔäót the biggest crowd present (unsurprisingly), which sort of affected the atmosphere.

There was actually an entire grandstand empty at the end of the start/finish straight (can be seen in the broadcast). We quickly took advantage of this since our seats were located at the middle of the straight, and saw some pretty neat wheel-to-wheel battle as a result).

Apparently there was no classification system regarding which tickets were classed as “good” or “bad” so even though we purchased ours in mid-spring, we got pretty modest placements.

It actually seemed as the first persons who bought the tickets ended up in the lower corner of each grandstand, with horrendous result for some friends of ours (who also found better places to watch the race from).

Other than the lack of spectators, my only complaint was the lack of support races. The only thing racing before the F1 on Sunday was one kind of mixed Korean racing series, which included everything from (a handful) pretty serious V8 sports cars to very unimpressive hatchbacks.

It would have been nice with a race from some Japanese formula series for instance.
Viktor Andersson (@Wismut) @Eggry has a tip for autograph hunters:

There will be autograph session after qualifying. It would be held on the track between main stand and pit lane or main straight if you like.

The session would be offered by order of arrival. As far as I know it would be for 500 or 600. There?óÔéĽÔäós special package which offer exclusive chance to get in the session earlier. I think the package is only offered in Korea. The package is 100 limited edition so overall, 600 or 700 people would get autograph.

The session is expected to be held about 30 minutes or one hour after qualifying. It?óÔéĽÔäós based on order of arrival so you should hurry for right place at right time.

Based on previous years, I think the gate on the right side (when you watch pit lane from the main stand) of the main stand. From my memory it should be near the pillar of the bridge across main straight.
@Eggry

The only place you can buy tickets this year is at http://www.auction.co.kr. It?óÔéĽÔäós all in Korean, so type in Korea F1 and you?óÔéĽÔäóll see a small box at the bottom for the Korean F1. Click on that box, then choose your language.

When you decide to buy tickets, the process is only in Korean, so they made a “guide” showing which buttons to push. You would have thought that they would have learned by now.
@Chris-Yu-Rhee

Does the race have a future? There have been persistent doubts over whether Korea will keep its place on the F1 calendar:

I hate to say it, but I really can?óÔéĽÔäót see this race survive many years in Formula 1, considering the current demand for F1 races from other countries/circuits.

Mokpo is not a very big city (not very exciting one either), and I really can?óÔéĽÔäót understand that the Korean Grand Prix doesn?óÔéĽÔäót take place in the proximity of Seoul or Busan for that matter.

The Turkish Grand Prix was dropped because of lack of interest as well as difficult communications from the capital, and Korea has got that problem too. The only difference is that the severity of this issue, as the two largest cities of Korea is far, far away from Mokpo.

Don?óÔéĽÔäót get me wrong, I loved the race and I really enjoy the circuit layout, but I still can?óÔéĽÔäót see the Korean Grand Prix being a long-lived one.
Viktor Andersson (@Wismut)

I hope it does stay on the calendar long enough for them to improve things further. I know the area was supposed to receive investment that fell through so that was a shame.

Obviously the infrastructure needs investment, getting a taxi to an industrial estate and then a bus from there was a bit daunting for our first day, but the volunteers (civil servants) were amazingly helpful and so friendly.
Alan (@Dogmop)

If you?óÔéĽÔäóre heading to this year’s race or have been before and have some advice to share, join in the discussion in the forum:

And remember to share your pictures and video here: