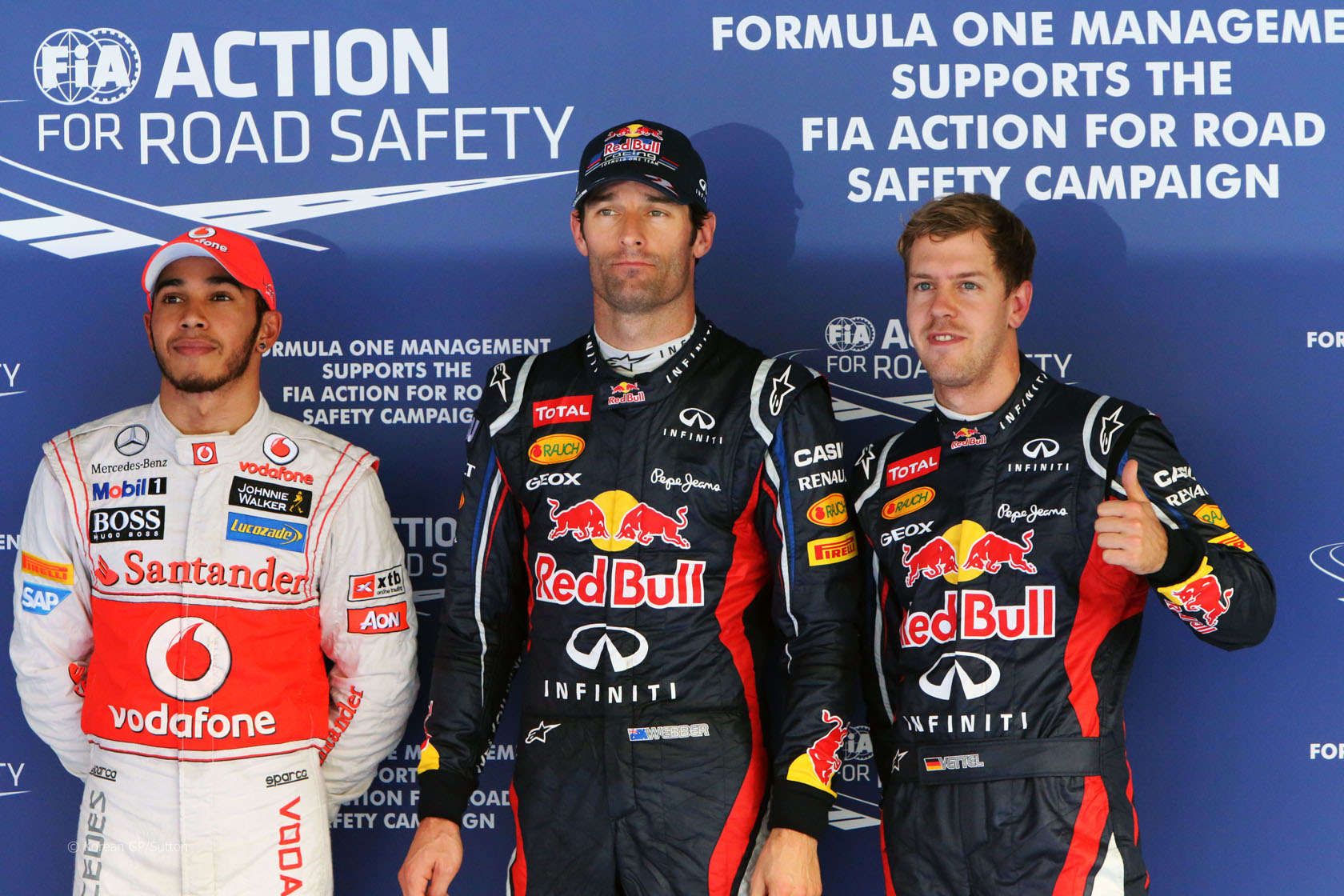 He had missed the last part of final practice with a technical problem and seen the other Red Bull of Sebastian Vettel lead throughout qualifiyng up until the final lap of Q3.

But a terrific last lap from Webber saw him snatch pole from his team mate.

Vettel did a single lap in Q1 which beat the fastest time at that point by six tenths of a second, easily enough to see him progress to Q2.

Narain Karthikeyan had a dramatic spin at turn three following a problem with his front brake. He returned to the pits but was unable to set a time.

As the track improved the drivers who returned to the track on super-softs found considerable improvements. The Saubers moved up to fourth and fifth followed by the two Toro Rossos.

That left some of those who had not done a second run looking worried. Fernando Alonso returned to the track on super-soft and only posted a modest improvement.

It was enough to move him up one place ahead of Lewis Hamilton. The McLaren driver was in real danger of being eliminated in Q1, and was only spared the embarrassment when Bruno Senna abandoned his last effort.

As in the first session Vettel only needed one lap to put his car at the top of the times, although his margin was reduced.With that he was happy to stay in the pits while everyone else did a second run.

However several drivers’ attempts to improve were stymied by a problem for Daniel Ricciardo, who stopped at turn 11. “I think something with the gearbox,” he told his team. “I tried to upshift and it went to neutral.”

Kimi Raikkonen was one of the drivers who improved after the yellow flags came out. He moved up to fifth, which pushed Button down to 11th, and out of Q3.

Vettel kept up his run at the top with a 1’37.316 at the beginning of Q3. “A very tidy lap,” was race engineer Guillaume Rocquelin’s verdict, who added there was perhaps a little more time to find in the second sector.

Alonso split the Red Bulls, taking second ahead of Webber. Massa backed him up in fourth with Hamilton fifth.

But having slipped to third, Webber hit back in a big way with his second lap. He produced a very clean final run, edging Vettel’s time by less than a tenth of a second.

Time and again we’ve seen Vettel produce a late flying lap to take pole position in these circumstances – but not this time. He stayed second, sealing a second consecutive one-two for Red Bull.

Hamilton moved ahead of Alonso with his last effort, taking third on the grid. That left the Ferrari driver fourth ahead of Raikkonen, and the pair will have their team mates directly behind them on the grid.

125 comments on “Webber stuns Vettel with pole position in Korea”