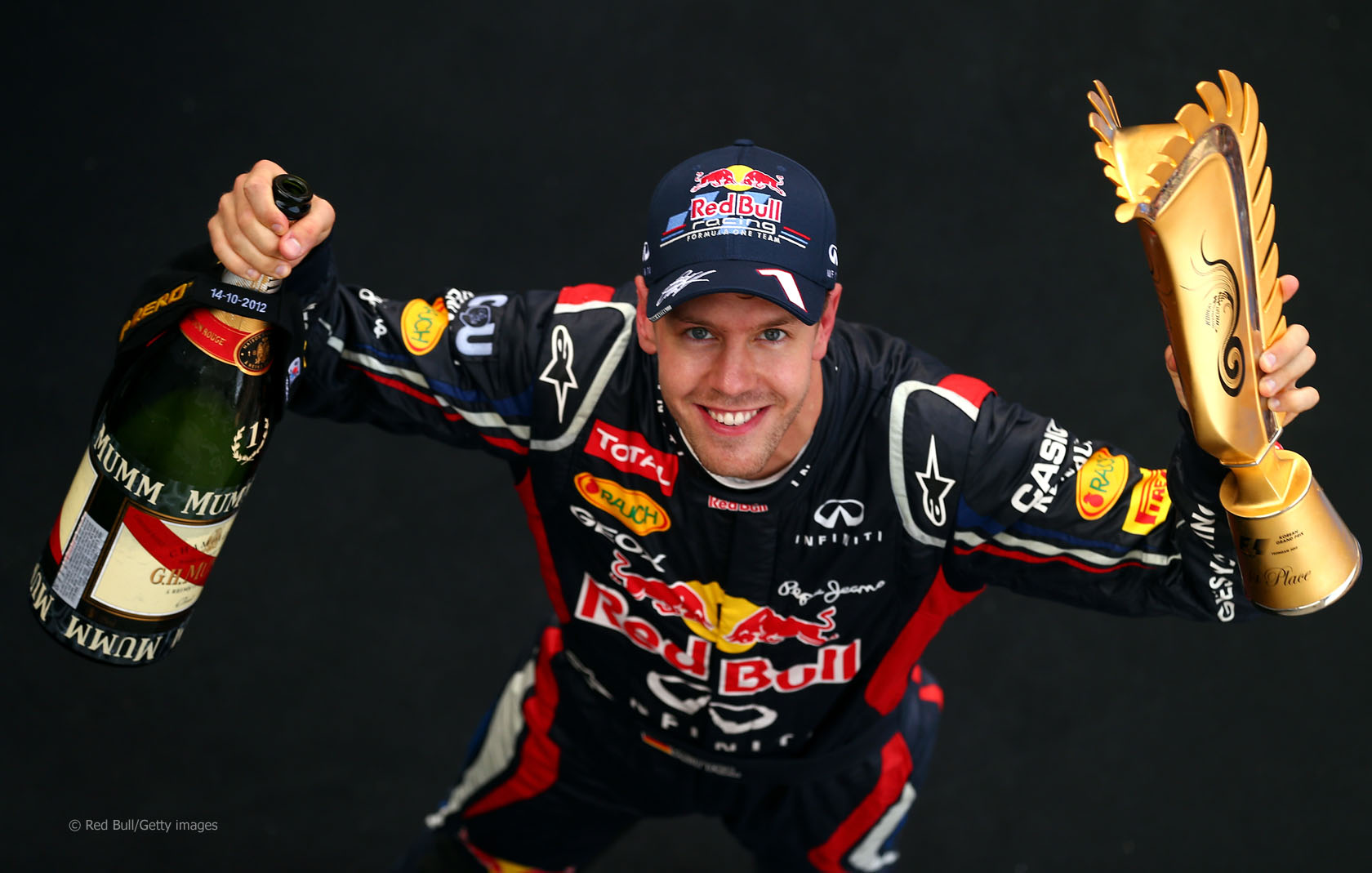 Sebastian Vettel took over the lead of the drivers’ championship with an emphatic win in the Korean Grand Prix.

Despite worries about tyre wear in the closing stages, Vettel led a one-two for Red Bull ahead of Fernando Alonso.

But it was a disastrous race for McLaren as Lewis Hamilton’s slim championship hopes faded even further and Jenson Button retired on the first lap.

Vettel lined up second on the grid but quickly took the lead at the start – just as he did last year. He beat pole sitter Webber to the first corner, then rebuffed his attack on the run to turn three.

Webber in turn had to hold off Alonso as they sped to turn four, the Ferrari driver having braked daringly late for turn three to pass Lewis Hamilton.

But the other McLaren got no further than the first lap. Jenson Button was hit by the out-of-control Sauber of Kamui Kobayashi at turn three. The furious Button called his rival an “idiot” on his radio as he pulled to a stop with broken front-right suspension.

Nico Rosberg was also involved in the accident – his second first-lap misfortune in as many races – and his Mercedes came to a stop at the beginning of lap two. He managed to find somewhere to park it on the barrier-lined straight leading from turn two. Marshals continued to wave yellow flags at the scene of Rosberg’s retirement, in the DRS zone, until lap nine. This caused problems for drivers trying to pass their rivals.

The Toro Rosso pair were stuck behind Pastor Maldonado, with Daniel Ricciardo complaining Jean-Eric Vergne was slowing him down. Vergne was given the ‘your team mate is faster than you’ message, but replied that he was being held up because he couldn’t pass the Williams.

Ricciardo held position behind Vergne and once the yellow flags were withdrawn the pair demoted Maldonado to 15th and later took Bruno Senna as well.

At the front Vettel was drawing away from Webber who in turn was leaving Alonso and Hamilton behind. Hamilton was the first to pit on lap 14, returning to the track a couple of seconds behind Sergio Perez, who had started on softs and was running a longer first stint.

Webber, Massa and Raikkonen reacted to Hamilton’s pit stop on the following lap, leaving Alonso to complete another tour as Hamilton gained on him. When Alonso came on on the next lap he returned to the track just in front of Perez and Hamilton.

He kept the Sauber behind at turn three while Hamilton took a speculative look and nearly paid for it with his front wing. Exiting the next corner Hamilton used his better traction on fresh tyres to out-accelerate Perez and close to within a second of Alonso. This was the high water mark of Hamilton’s challenge during the race. Soon after he began complaining about his car’s handling. “We understand the problem,” said his engineer. “We think it’s a mechanical balance change.”

Hamilton slipped back towards Massa, who passed him with ease in the DRS zone. Soon Raikkonen was on the tail of the McLaren, though he found it tougher to pass. He got by in the DRS zone on lap 24 but Hamilton responded at turn four and claimed the place back.

Raikkonen’s attempts at passing were repeatedly frustrated by Hamilton, to the point that the pair fell over seven seconds behind Massa. But by lap 27 Hamilton reported his tyres “shredding” and had to make an early second pit stop.

McLaren held on to the hope that a third stop might not be necessary but it was in vain. Adding insult to injury, Hamilton collected a loose piece of Astroturf in his final stint which ruined his handling even further.

Having been sizing up the Toro Rossos for a pass, Hamilton ended the race fending off an attack from Perez.

“You’re a bit too close to Fernando”

Vettel’s first stop passed without incident and he continued in the lead. He stayed out longer than his pursuers at his second stop as well but had a scare at turn three on his in-lap, locking up his tyres very hard.

There were worried faces on the Red Bull pit wall after they examined the state of Vettel’s tyres from the second stint. “After the last stop we could see there was not a lot of tread left in the tyre,” admitted Christian Horner afterwards. “Both of them were very marginal at the end.”

Vettel received repeated urgent messages from race engineer Guillaume Rocquelin during the final stint. “From now on you could be down to the cord on the right front,” said Rocquelin late in the third stint.

“Be very careful under braking. Remember what happened,” he added, reminding Vettel that when the tyres went it would be without warning.

Behind him Webber had to be increasingly wary of Alonso, who was coming on strong after treating his tyres with care at the beginning of the third stint. At that point Massa was closing on him rapidly, and Ferrari were quick to remind him that occupying a place on the track in front of his team mate is not the way to ensure a contract renewal for 2013.

“You’re a bit too close to Fernando,” warned Rob Smedley. “I think you could back off at least another second.” Massa obliged, and was later informed when Alonso had picked up his pace. Vettel’s lap times dipped towards the end of the race as he heeded the team’s advice. Webber claimed the fastest lap on the penultimate tour as Red Bull put a lock on the first one-two for a team this season.

Third place for Alonso was not enough to stop Vettel from taking the championship lead, which the Ferrari driver has held since June. Massa was a dutiful fourth, Raikkonen over 16 seconds behind in fifth.

Nico Hulkenberg briefly lost position to Romain Grosjean following the last pit stops. But when the pair caught the slowing Hamilton the Force India driver positioned his car perfectly at turn four to pass the pair of them.

Vergne and Ricciardo secured a double points finish for Toro Rosso, while the hobbled Hamilton clung on to the final points position. But he is now 62 points adrift of Vettel, and his championship hopes have gone from being a long shot to to highly unrealistic.

Until the Japan/Korea double-header no driver had won consecutive races this year. Now Vettel has won three in a row, and has the points lead in the championship to boot. A third world championship beckons for Red Bull’s rising superstar.