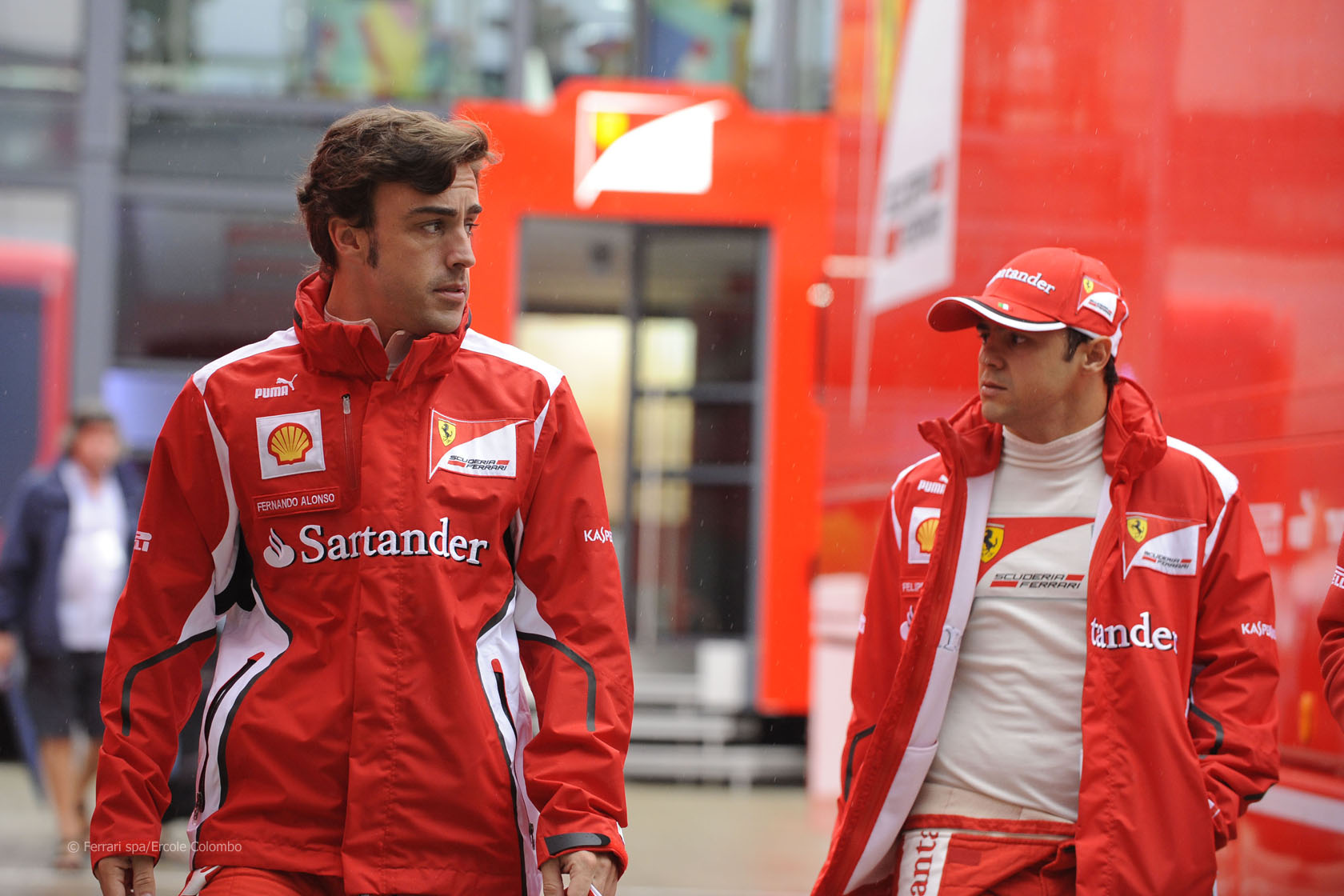 Another crucial part of the 2013 F1 driver line-up was settled yesterday when Ferrari announced they would retain Felipe Massa for 2013.

But with Massa only securing a one-year extension on his Ferrari contract, the decision about the long-time future of their line-up has merely been postponed for another 12 months.

What sort of team mate do Ferrari want for Fernando Alonso? Here’s a look at the prominent choices.

Ferrari’s decision to retain Massa for 2013 was a long time coming. They waited until after their original option on his contract expired.

Promising young drivers such as Sergio Perez were spurned on the grounds of having “too little experience”. Perez, of course, was eventually taken up by no less a team than McLaren.

Massa has belatedly upped his game in recent races. In Japan he finished on the podium almost two years to the race since his last top-three finish in the 2010 Korean Grand Prix. The single podium Massa has achieved since then compares to the 20 Alonso has racked up, including four wins.

Massa’s points tally as a proportion of Alonso’s has steadily fallen since their first season together in 2010. It was 57% that year, 45% in the next, and so far this year Massa has just 38% of Alonso’s points haul.

To put that into perspective, Mark Webber had a difficult season alongside Sebastian Vettel last year, yet still scored 65% of Vettel’s tally.

It’s clear that Massa’s performance is in decline. How far Ferrari are prepared to tolerate that depends on what role they expect him to play. On the eve of last season Red Bull announced a contract with Vettel which would keep him at the team until the end of 2014. However Helmut Marko subsequently revealed Vettel has a performance clause in the contract which could allow him to leave early.

The rumours about Vettel potentially moving to Ferrari began in June. They resurfaced on Monday when the BBC claimed a deal had been done for 2014.

Vettel already has as many world championships as Alonso. Given Red Bull’s performance in recent years, were he to arrive at the team in 2014 he might already have three or even four world championships to Alonso’s two and a tally of victories that also outstrips Ferrari’s incumbent driver.

Clearly, Vettel would be a vastly more competitive team mate than Massa. And it would be a surprise to see Ferrari buck their trend of preferring drivers who fall into clear ‘number one’ and ‘number two’ roles.

Luca di Montezemolo insisted that policy was not changing when he dismissed the Vettel story on Monday: “I don?Û‘Èº‘‰Ût want to have two roosters in the same henhouse, rather two drivers who race for Ferrari and not for themselves. I don?Û‘Èº‘‰Ût want problems and rivalries.”

But not everyone at Ferrari necessarily shares this view. A question using a similar phrase was put to team principal Stefano Domenicali four months ago. He was asked whether Vettel could only join Ferrari after Alonso had left because “two cocks cannot live in the same hen house”.

Domenicali replied: “I think they are both intelligent guys and they could easily coexist together.” Not exactly singing from the same sheet as Montezemolo. And not a view Ferrari tried to downplay or hush up – they reported it on their own website.

It would be an inspiring and very special sight to see Ferrari put two of F1’s greatest talents in their 2014 cars. The ‘clear number one’ policy has failed to yield a championship for Ferrari’s drivers or a constructors’ title for the team in the last three seasons, nor will it this year as things stand. Perhaps Ferrari are beginning to realise it’s time for a change of approach?

There are several reports claiming Nico Hulkenberg will leave Force India for Sauber next year.

On the face of it this seems like something of a sideways move, even if Force India are behind Sauber in the constructors’ championship at the moment.

But the recent news about Vijay Mallya’s financial situation does not inspire confidence in the long-term prospects of the team. Whereas Sauber appear to be going from strength to strength as they rebuild following the BMW era.

Perhaps most significantly, it means a move from Mercedes to Ferrari power for Hulkenberg, and a move to a team where Massa served his F1 apprenticeship before becoming a Ferrari driver.

It indicates Ferrari may have their sights on a different German driver to join them in 2014.

A door opens for Bianchi

By vacating a seat at Force India, Hulkenberg could create an opportunity for Ferrari Development Driver Jules Bianchi to land an F1 race seat.

Bianchi was quickest in all three days of the recent Young Drivers’ test at Mugello, two of which he spent at Ferrari, one at Force India.

He has driven the VJM05 on eight occasions in 2012. And he has just taken over the lead of the Formula Renault 3.5 championship, which will be decided in Spain this weekend.

Is Bianchi a Ferrari driver of the future? It’s much too early to say. As their handling of Perez showed, it’ll take a few years of him racing in F1 before they’re prepared to make that call.

Sauber are already losing Sergio Perez to McLaren next year, and there are rumours Kamui Kobayashi may follow him out of the door.

Kobayashi is in his third full season with the team and achieved his first podium finish in Japan last week. But he has been out-performed by the less experienced Perez, who has already appeared on the podium three times.

Kobayashi’s lack of financial backing may swing the decision, which would be a terrible shame for him, the sport and its ever-diminishing connection to Japan.

Perez’s place at the team may be taken by another Escuderia Telmex-backed driver, Esteban Gutierrez. A fellow Mexican, Gutierrez won the inaugural GP3 championship in 2010.

A haul of just 15 points in his first season of GP2 didn’t do justice to the promise he showed while partnering the more experienced Bianchi. But the high hopes many had of him for this season were not realised as he dropped out of contention for the championship following a series of mistakes.

Gutierrez is Sauber’s test driver and drove for them in the last two Young Drivers’ Tests. However he is yet to make an appearance for them at an F1 race weekend.

When Perez withdrew from last year’s Canadian Grand Prix due to injury, Gutierrez missed out on his chance to drive the car, the opportunity going to Pedro de la Rosa instead.

Can Massa hang on to a Ferrari seat beyond 2013? Will Ferrari ever choose “two roosters” and sign Vettel?

Is Hulkenberg being groomed for a Ferrari future? And who else might be a candidate?

90 comments on “Who will be Alonso’s next Ferrari team mate?”