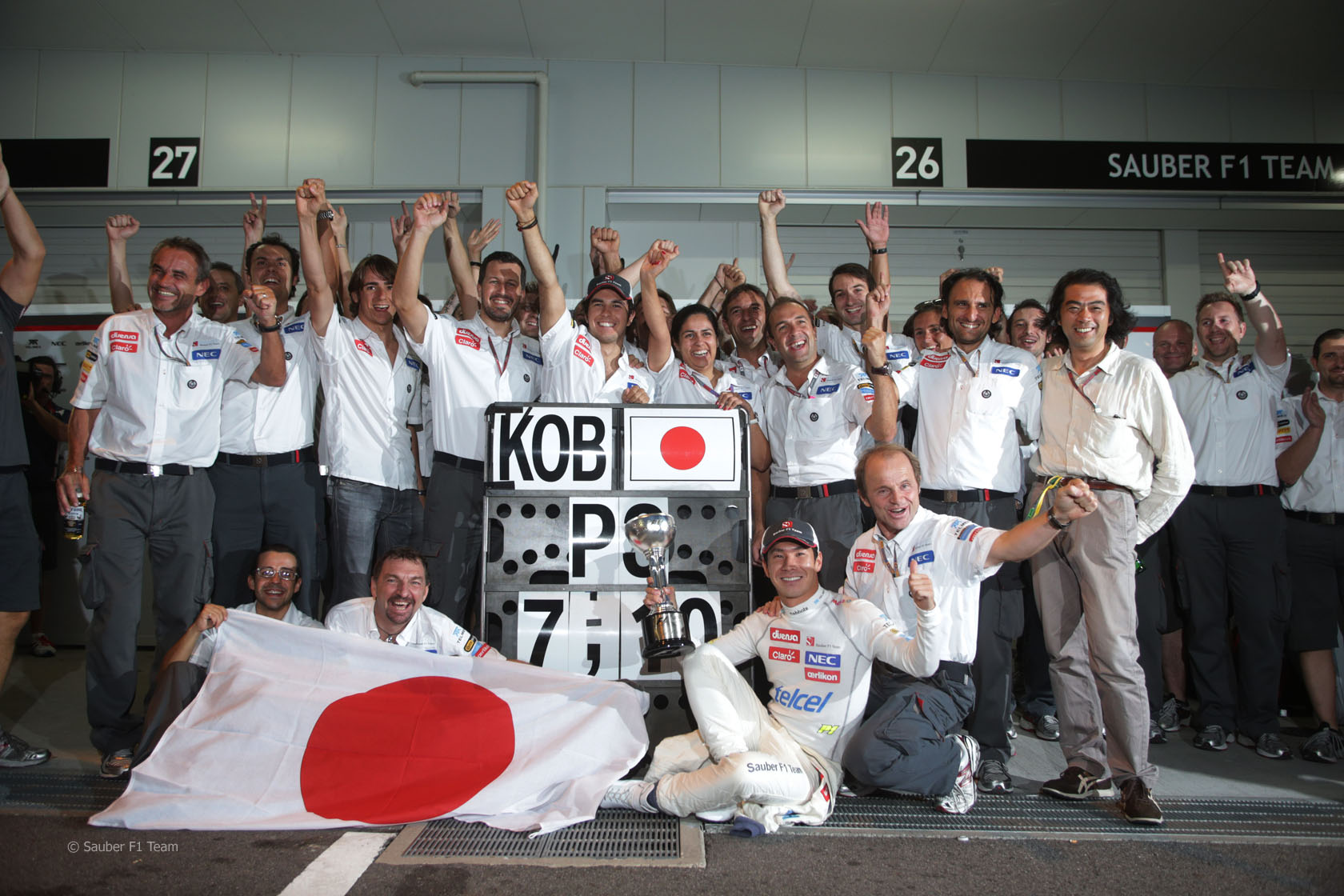 Kamui Kobayashi’s maiden podium appearance in the Japanese Grand Prix elevated him to the top of the Driver of the Weekend poll.

Kobayashi netted 39% of the vote putting him just ahead of race-winner Sebastian Vettel on 33%.

Felipe Massa made his first appearance in the Driver of the Weekend top three after finishing second for Ferrari. Kamui Kobayashi enjoyed a perfect weekend in front of his home fans, starting with a third place on the grid and finishing the race in the same position. It was a timely performance from the Sauber driver, coming amid doubts over his future in F1.

He beat Mark Webber to turn one but was overhauled by Massa during the pit stops. Late in the race he resisted growing pressure from Jenson Button to claim the first podium of his career.

The statistics tell me I should vote for Vettel with his fast practice sessions, qualifying on pole, getting the fastest lap and winning the race, but I?óÔéĽÔäóm going to vote for Kamui Kobayashi because he drove exceptionally well in a merely decent car and withstood the pressure from the very quick McLaren of Button to keep the podium position he so deserved.
Driftin

It was Kobayashi?óÔéĽÔäós first podium in a race where he could show not just his speed, but defensive and tyre management skills, under the expectant eyes of his Japanese fans. He withstood the pressure and got the podium he deserves, and my vote.
Scottie

Had to vote for Kobayashi. He?óÔéĽÔäós a top driver. Like I said in previous posts, I had the privilege of seeing these guys in lower formula racing here in Macau. Kobayashi has “it”. completely outclassed everyone in this demanding city circuit when he raced here, even though he didn?óÔéĽÔäót won the Sunday?óÔéĽÔäós race (won the Saturday one, though).

Back to Suzuka, Lets not forget he qualified in fourth but had to reduce pace due to yellow flags. He completely outclassed Sergio Perez (the guy with my name). The race was flawless. Hope to see him in a bigger team.
Sergio Perez What is it about Vettel and Suzuka? His record now stands at four pole positions and three wins in four years.

The Red Bull driver dominated the weekend, scoring pole position, and setting fastest lap on his way to victory. He also led every single lap on Sunday, which meant he completed his second grand slam.

The ?óÔéĽ?Łbest?óÔéĽÔäó driver of the weekend is Sebastian Vettel. His qualifying performance was stunning, and after the restart he led comfortably, winning with the biggest margin this year.
Andae23

Vettel. As simple as that. Pole, fastest lap and victory.
Pedro Costa

Frankly, you can?óÔéĽÔäót do any more than put the car on pole, lead every lap, set the fastest lap and cross the line first. So Vettel from me, because even though he is not my favourite driver, the poll is for what you do in the car, and I don?óÔéĽÔäót see how his performance could have been any more perfect.
Tyler The Ferrari driver’s weekend didn’t get off to the best of starts as he failed to reach Q3 for the tenth time this season.

But a series of crashes at the first corner promoted him to fourth by the end of lap one. From there he got ahead of Button and Kobayashi during the pit stops to end his near-two year wait for a podium.

Massa was very fast in qualifying but unlucky in Q2. He avoided everyone and became fourth on lap one, and by pushing very hard he overtook two cars in the pits.

Then he kept going for most of the time on Vettel?óÔéĽÔäós lap times despite an inferior car. The result is great as it comes after a long period of bad luck/results, not because of the result itself.
Fixy

He drove a great race (as he has done whenever Alonso isn?óÔéĽÔäót in it) and he?óÔéĽÔäód have been in contention has he made it out of Q2, but he didn?óÔéĽÔäót. A good effort, especially with his contract undoubtedly being under pressure, I hope he can show more of it this year ?óÔéĽÔÇŁ who knows Ferrari might even catch McLaren in the constructors’ championship if he does!
Bosyber

I have to say that even though Kobayashi deserves a big shout out for what he did, I had to put my vote to Massa. He either had to make this drive or it was almost certain his career was over.
DaveD

Voting is still open in the most recent Driver of the Weekend poll so add your vote here: