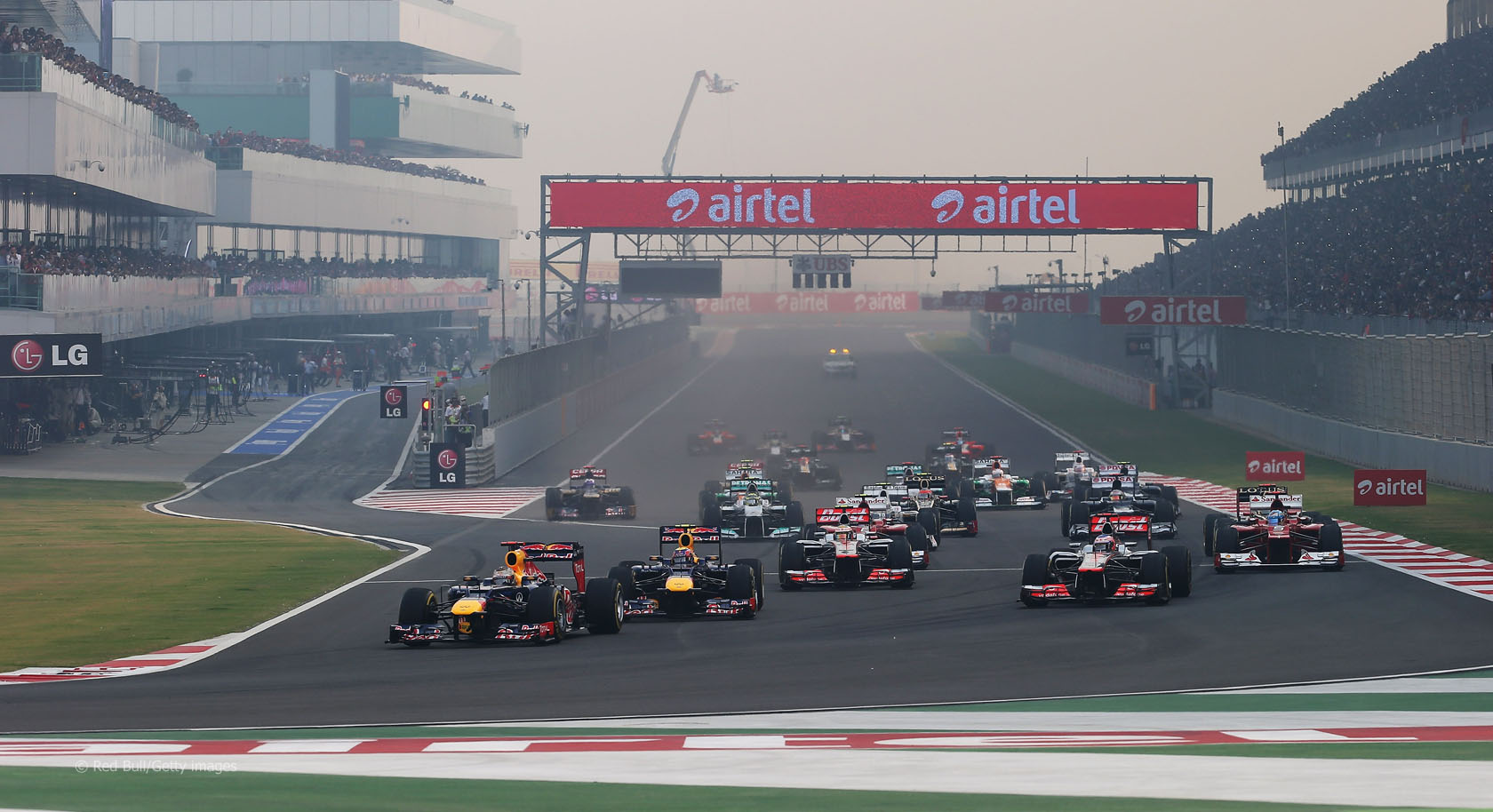 Which F1 driver had the best race weekend in India?

Compare all the drivers’ performances below and vote for who you think was the best driver of the Indian Grand Prix weekend. Sebastian Vettel – Fastest in both sessions on Friday, Vettel secured passage through Q1 and Q2 using just eight laps. He nearly tripped up with a mistake on his first Q3 lap, but his final effort secured his fifth pole position of the season. He made no mistakes at the start, and never looked like bowing under pressure after Alonso took up second place behind him.

Mark Webber – Had a chance at taking pole position off Vettel but made a mistake at turn three on his final lap. Couldn’t get within range of his team mate at the start but probably wouldn’t have lost second to Alonso had it not been for his KERS problem.

Jenson Button – McLaren’s gearbox problems continued in India for both drivers. It cost Button significant running in the second practice session. He took third on the first lap but was demoted by Alonso and Hamilton in the DRS zone, and had a lonely run to fifth. Set fastest lap on the final tour.

Lewis Hamilton – Hamilton’s gearshift problem occurred in the race and necessitated a change of steering wheel which was accomplished with impressive speed. By that time the leading trio were already too far ahead, Hamilton having lost a place to Alonso at the start when he braked slightly too late for turn four. He reeled in Webber at the end but was unable to pass him for third despite getting within DRS range. Fernando Alonso – Before the race Alonso said his first goal was to pass the McLarens and then put pressure on the Red Bulls in the hope that something would go wrong for them. That was exactly how it panned out: he was up to third by lap four, then chased after the Red Bulls. How he must have wished the KERS problem had affected Vettel’s car instead of Webber’s. Second was the best on offer and it keeps him in range of Vettel.

Felipe Massa – Looks scruffy with spins in practice and qualifying, though at least part of that was down to a problem on his car on Friday. Never looked like figuring in the battle with the five cars ahead of him, but used DRS cannily to re-pass Raikkonen when he lost position to the Lotus driver after pitting. Coped with low fuel in the second half of the race to secure sixth.

Michael Schumacher – His race was ruined after minor contact with Vergne on the first lap left him with a puncture. The stewards ruled in his favour after drivers complained he did not respond to blue flags quickly enough.

Nico Rosberg – Rosberg found good performance on the soft tyres after several laps – but that was no use to him in Q3, so he didn’t set a time. In the race he slipped out of the top ten to 11th. He described his weekend as “pretty unsatisfactory”, saying his Mercedes “just didn’t have the pace”.

Kimi Raikkonen – Raikkonen blamed the changes he made to his car after final practice for a sub-par showing in qualifying. He started seventh and couldn’t make any headway during the race, losing out in his one chance to pass Massa after his pit stop. Since its Coanda exhaust update in Korea the E20 has been conspicuously lacking in straight-line speed.

Romain Grosjean – Stayed out of trouble and scored points again, though he missed out on Q3 for only the second time this year when he went off at turn six. Got past Rosberg on his way to ninth place. Paul di Resta – Di Resta was distinctly unhappy with his car after the race and said he was unable to finish any higher than 12th. “I?óÔéĽÔäóve struggled to find the ideal balance with the car all weekend,” he said. “We identified a few issues in the data last night, but they carried over into the race.”

Nico Hulkenberg – In the points for the third race in a row, he came out on top in a battle with Grosjean, as he did in Korea. A strong start was key to this, as he jumped up from twelfth to ninth.

Kamui Kobayashi – Using a low fuel load in Q2 backfired as an error with his brake balance settings left him 17th on the grid. Had an altercation with Maldonado during the race which resulted in the Williams driver spinning off with a punctured tyre. “It was a bit strange,” said Kobayashi of the collision. “He had overtaken me but then he suddenly came on my racing line again. I could not avoid having contact.” The stewards ruled it was a “racing incident”.

Sergio Perez – Qualified a strong eighth but unusually his tyres went off long before everyone else’s. Picked up a puncture after contact with Ricciardo which ultimately forced him to retire.

Daniel Ricciardo – Felt his car improved after switching to the soft tyres but was never in the hunt for points. “Not exactly an exciting race,” he said afterwards.

Jean-Eric Vergne – Knocked out in Q1 for the seventh time this year. Damaged his front wing colliding with Schumacher at the start which spoiled his race. Pastor Maldonado – Got into Q3 but was already slipping backwards when his race was destroyed by a puncture following contact with Kobayashi.

Bruno Senna – Looked quick in practice but failed to make it into Q3. “I made a mistake on my lap which is disappointing because I would have been in the top ten if that hadn?óÔéĽÔäót happened,” he said. However his race pace was good and he passed his team mate early on. Another pass on Rosberg secured his first point since Monza.

Heikki Kovalainen – Began the race planning to stop twice but switched to a one-stopper. By half distance he was just over five seconds behind Kobayashi, but KERS failure spoiled the second half of his race.

Vitaly Petrov – Out-qualified Kovalainen for the third time in four races. He dropped behind his team mate and Pic at the start, but soon passed the Marussia. Kovalainen’s KERS failure allowed him to pass his team mate for 15th, but he was later demoted by the recovering Vergne and Maldonado. Pedro de la Rosa – De la Rosa made a terrific start and briefly held 17th before the Caterhams and Marussias came past him. On lap 43 he suffered the latest in a series of brake failures for HRT, putting him into the barrier at turn four.

Narain Karthikeyan – Treated his brakes gently to survive to the end, albeit 40 seconds behind the next car.

Timo Glock – Said his car’s long run pace felt good on Friday but couldn’t replicate it in the race, finishing well behind his junior team mate.

Charles Pic – Qualified last but made a great start and held off Petrov for several laps. Finished ten seconds behind Kovalainen but at least half that was down to blue flags late in the race.

Who was the best driver of the 2012 Indian Grand Prix weekend?