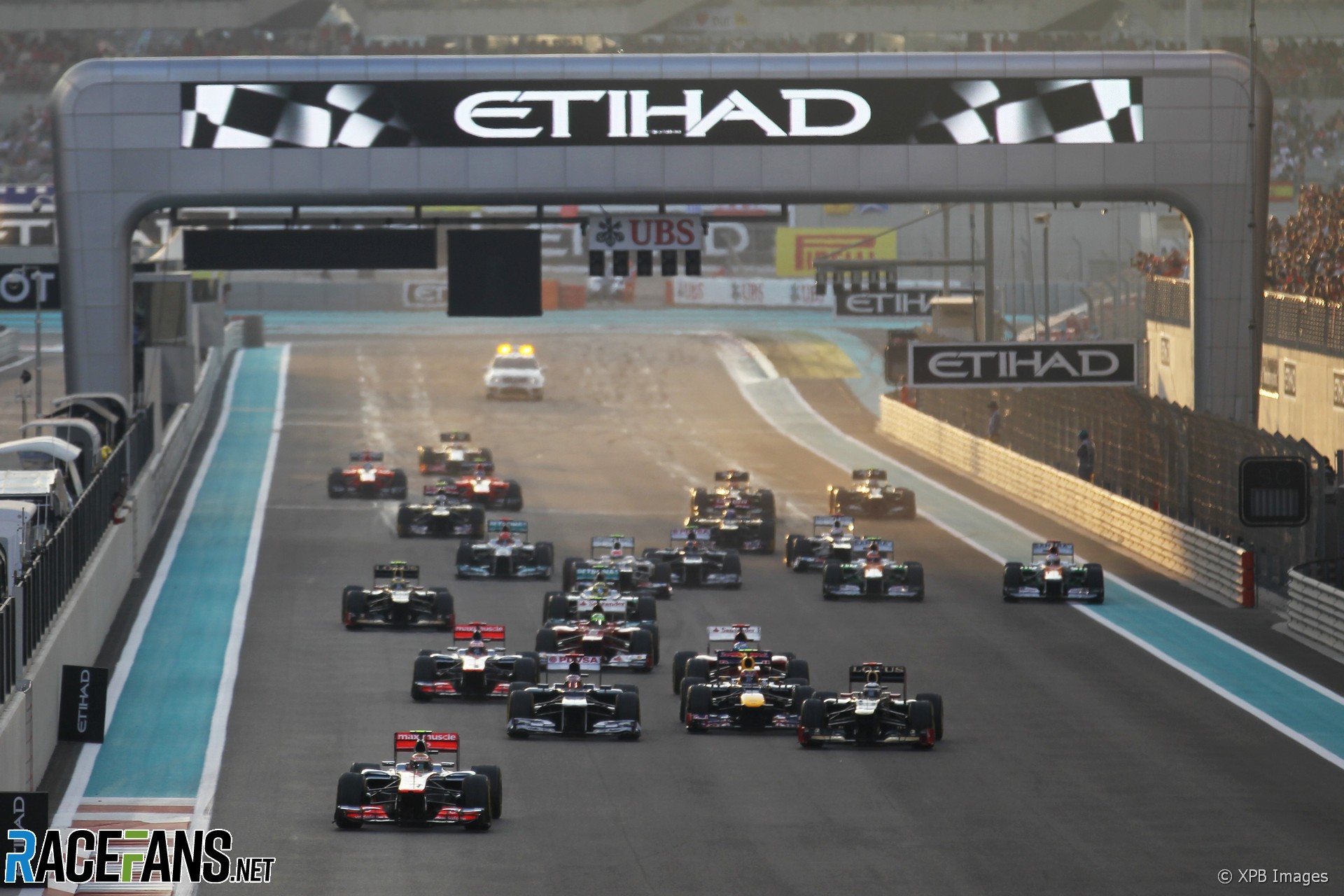 Raikkonen inherited the lead of the race when Lewis Hamilton retired and withstood severe pressure from Fernando Alonso in the final laps of the race.

At the end of a dramatic race saw Sebastian Vettel claimed the final a place on the podium despite having started in the pits.

With Vettel’s race not starting until the rest of the field had passed through turn one, Alonso had an opportunity to put one over his rival – which he wasn’t about to waste.

He took Jenson Button at the exit of turn one at the start and demoted Mark Webber on lap one as well.

The Red Bull driver had started slowly, allowing Raikkonen to dodge around him and take up second behind Hamilton. Pastor Maldonado held third, keeping Alonso at bay.

The Force India pair tangled at the first corner and further contact with Bruno Senna ended Hulkenberg’s race. Paul di Resta headed for the pits with a puncture, as did Romain Grosjean, who had contact with Nico Rosberg further around the lap.

This handed a few places to Vettel and he gained several more as he picked off Charles Pic, Bruno Senna, Vitaly Petrov, Timo Glock and Heikki Kovalainen. That moved him up to 13th place.

Huge crash for Rosberg and Karthikeyan

Rosberg had also pitted for repairs at the end of lap one and was making his recovery when he caught the HRT of Narain Karthikeyan. Heading into turn 16, Karthikeyan’s steering locked solid and he suddenly came off the power.

Rosberg had no time to react. The result was a shocking crash, the Mercedes vaulting over the HRT, narrowly missing Karthikeyan’s head. With debris all over the racing line the safety car was summoned.

This gave Vettel, who had damaged his front wing racing with Senna, the chance to dicuss the situation with engineer Guillaume Rocquelin. “We’re not worried about the front wing damage,” said Rocquelin. “Keep an eye on it,” replied Vettel, “maybe we can change it on the pit stop.”

That decision changed moments later when Vettel was caught out by Daniel Ricciardo braking in front of him on the straight. “What is he doing, he’s stopping all the time” exclaimed a furious Vettel.

He swerved off the track avoiding the Toro Rosso, damaging his front wing even further. “Right there was the stupid DRS board which I managed to hit straight on,” he said after the race. “Finally had to change the front wing.”

So when the safety car came back in after lap 14 Vettel was back at the rear of the field and potentially facing over 40 laps to go on his new set of soft tyres.

Hamilton retires from the lead

Hamilton was disappointed to see his lead eradicated by the safety car but he swiftly restored his advantage over the Lotus when the race resumed.

Behind then Alonso made a mistake and came under pressure from Webber but the Red Bull’s straight-line speed wasn’t good enough to make a move stick on the fourth-placed Ferrari.

But Alonso’s fortunes suddenly changed when, on lap 19, Hamilton’s car came to a stop with a loss of fuel pressure. For the second time this year it had failed him while he was leading.

Alonso was up to third and that became second when Maldonado lost KERS, allowing the Ferrari to get by. But Webber’s attempt to do the same on lap 23 went wrong – the pair made contact, tipping Webber into a spin which left him seventh. Maldonado continued to slip back with first Button, then Perez passing the Williams.

Vettel climbs into the points

While all this was going on Vettel was climbing his way back into the points. He picked off a string of cars in the first laps after the restart. Crucially, he did so quickly enough to be able to take advantage of those in front of him who were beginning to pit.

This was despite a hasty move on Grosjean in which Vettel put all four wheels off the track. Anxious to avoid a repeat of his penalty from Germany, Red Bull wisely advised Vettel to surrender the position. He did, and re-passed Grosjean shortly afterwards.

After passing Ricciardo and Michael Schumacher Vettel was up to eighth and had his team mate in sight. Webber was pressuring the Ferrari of Felipe Massa, who had been told twice by race engineer Rob Smedley that the team wanted him to stay out.

Webber attacked Massa at turn 11 and again there was contact. The Red Bull took to the escape road and Massa pirouetted as he rounded the off-camber turn 13. Smedley was quickly on to the stewards but they ruled it had been a racing incident.

Vettel claimed another place from Massa and was now closing on Webber. Ciraon Pilbeam advised Webber not to put up a fight against his team mate: “He’s on fresher tyres and a different strategy.”

The leaders were now well into their pit stops and as they came in Vettel suddenly found himself in second place with Raikkonen not far ahead. But his soft tyres were beginning to wilt and Alonso was closing in behind, despite also having the McLaren of Button on his tail.

Red Bull resigned themselves to the inevitable and brought Vettel in. This proved fortuitous timing when the safety car was deployed minutes later.

This came after a four-way battle for fifth place ended in tears. Grosjean attempted to repel an attack from Di Resta, allowing Perez to make a move around the outside of the pair of them at turn 11. But the Sauber had to take to the run-off on the outside of turn 13 as Di Resta cut the inside of the corner.

Returning to the track, Perez found Grosjean on his inside and the pair collided. Grosjean’s car was mortally wounded, and Webber behind was unable to avoid the Lotus. Scratch two more cars – and Perez’s race was spoiled by a ten-second stop-go penalty from the stewards.

“You don’t need to remind me all the time”

Lotus were anxious to avoid any late dramas for Raikkonen during the second safety car period and were reminding him of the need to keep his tyres up to temperature when he told them in no uncertain terms that such messages were superfluous: “Leave me alone, I know what to do, ” he said, adding “Yes, yes, yes, you don’t need to remind me all the time” in response to another.

He scorched away from the field when the race resumed, leaving Alonso to fend off Button and – remarkably – Vettel, who had the benefit of a fresh set of soft tyres for the closing laps of the race.

He was also aided by much-improved straight-line speed, as starting from the pit lane allowed him team to make changes to his car to make it more competitive in a straight-line. However these alterations were completely untried before the race began.

At first Button remained in DRS range of Alonso, which gave him the edge he needed to keep clear of Vettel. But as Alonso pulled away from them the advantage swung towards Vettel.

Eventually he got closer to Button by braking daringly late for turn eight, got alongside on the following straight, and passed the McLaren driver on the outside at turn 11. Crucially, he and Button left each other more room than Maldonado and Webber had.

Alonso pushes Raikkonen to the end

That reduced the gains Alonso had made even further, but as the race drew to a close it looked as though Alonso might go one better than second place. He edged closer and closer to Raikkonen, and was just one second behind on the penultimate lap.

But as they began the final tour Raikkonen found a vital two-tenths to prevent Alonso from attacking him with DRS. That finally clinched the first win for a Lotus in over 25 years.

Vettel had jokingly told Alonso before the race that he’d see him on the podium, and Alonso can’t have been pleased to see the prediction come true. Vettel might have had the run of the green at times, but his final pass on Button was a hard-fought move and third place was a just reward for his indefatigable commitment.

Button was a disappointed fourth, while Maldonado held onto fifth despite a lack of KERS. He was aided by Kamui Kobayashi suffering a similar problem – a downshift problem meant his KERS wasn’t charging fully.

Massa held off Senna and Di Resta for seventh place and Ricciardo claimed the final point after resisting Schumacher in the final laps.

Jean-Eric Vergne was 12th ahead of Heikki Kovalainen. The Caterham driver held the 12th place the team badly need at an earlier stage but also suffered a KERS problem and ended up 13th. Glock, Perez, Petrov and De la Rosa were the remaining finishers.

Like Vettel, de la Rosa also started from the pits. After the race Vettel insisted he believed a podium finish was possible from there, though his team principal had not been so optimistic.

If Vettel retains his title this year, the damage limitation job he did in Abu Dhabi will have played a vital role in it.