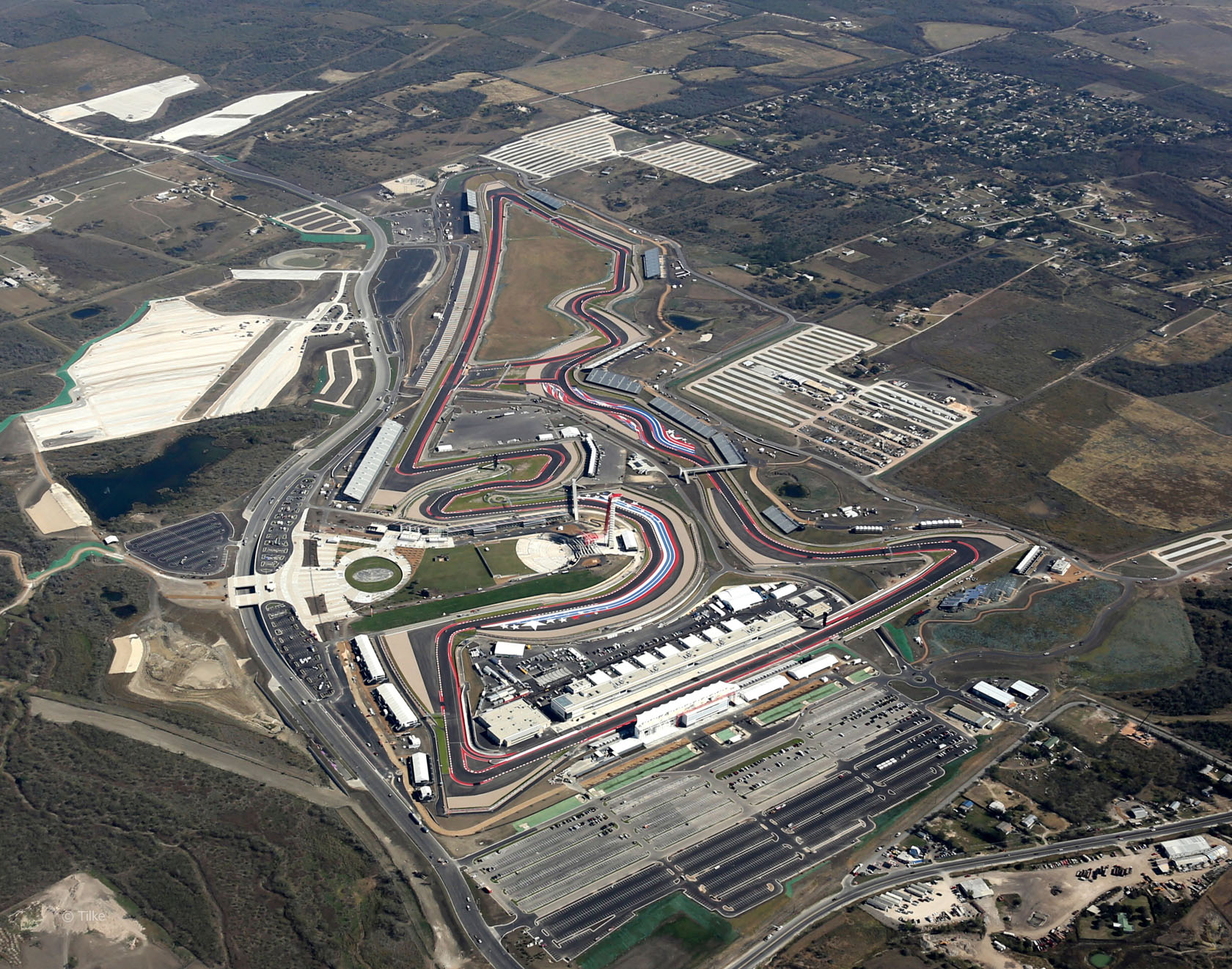 The Circuit of the Americas will hold the United States Grand Prix for the first time this weekend. Will it be more successful than the nine venues which have gone before?

When the world championship was inaugurated in 1950 the Indianapolis 500 was included as a round to give it some credibility as a truly global series. It was the only event on the schedule which took place outside Europe in the first year of the championship.

However the Indianapolis 500 was run to a completely different set of regulations. There were occasional attempts by top F1 drivers such as Juan Manuel Fangio and Alberto Ascari to enter the race.

If a way could have been found to retain it within the framework of the championship, the history of F1 in America might have been very different and much more successful. As it was, the race lost it championship status after 1960, which did nothing to diminish its growth as America’s greatest motor race.

Ironically, only at this point did F1 drivers begin to enjoy success at the race, beginning with Jim Clark in 1965 and Graham Hill the year after.

F1 returned to Indianapolis in 2000 to race on a newly-constructed Grand Prix circuit which incorporated one turn of the historic oval.

The result was mixed at best: the world championship track was dwarfed by the oval surrounding it, and the F1 cars looked particularly pathetic negotiating a clumsy double-hairpin in the middle of the circuit. But visitors to Indianapolis were at least able to witness the sight of cars racing in the rain, which does not happen in oval racing.

F1’s stay at the track was soured by two controversies. In 2002 Ferrari dominated the race, but Michael Schumacher slowed at the finish, letting Rubens Barrichello pass him, which he later admitted had been an accident.

Worse, three years later just six cars took the start after the Michelin-supplied teams had discovered their tyres could not withstand the forces imposed by the banked corner of the oval. The FIA failed to broker a solution, and a mass withdrawal on the formation lap turned the race into a farce.

The first true United States Grand Prix was held at Sebring in 1959, promoted by Alec Ulmann. Stirling Moss took pole position with a time of exactly three minutes around the 8.39km (5.2-mile) circuit.

Three drivers arrived at the race, the last of the season, in the hunt for the championship. But Tony Brooks’ hopes were wrecked just three corners in when he was hit by Ferrari team mate Wolfgang von Trips.

Moss retired from the lead on lap five when his gearbox failed. This meant Jack Brabham was virtually guaranteed the championship but with Brooks still circulating he pressed on, and even pushed his car to the finishing line when it ran out of fuel, securing fourth place and the title.

The Sebring race saw unimpressive attendace so the following year Ulmann took the Grand Prix west to Riverside in California. But this also proved a one-off venue for the race.

Ferrari declined to appear at the event, Brabham having already retained the drivers’ title and Cooper holding onto the constructors’ crown. The race was won by Moss, driving a Lotus entered by Rob Walker, 38 seconds ahead of the works Lotus entry of Innes Ireland.

F1 never returned to the track, which continued to host sports car races until it was closed in 1989. As you can see from the map above, the circuit has since been demolished.

For 1961 Cameron Argetsinger took over the promotion of the United States Grand Prix and moved it to Watkins Glen. It became the first long-term home of F1 in America, the purpose-built track in New York State proving a popular end-of-season venue.

The build-up to the 1961 race provided a real opportunity to inspire American interest in Formula One. Californian Phil Hill was in the hunt for the world championship which looked set to be decided in the last round at Watkins Glen.

But tragedy struck at Monza – Hill’s team mate won Trips was killed in an accident which also claimed the lives of 15 spectators. Ferrari stayed away from Watkins Glen, leaving Hill without a drive.

Ferrari skipped the 1962 race as well after a miserable season. When Jim Clark retired from the lead on lap 62 it handed victory and the championship to Graham Hill.

The track was extended for the 1971 race (this can also be seen in the map above) but crashes claimed the lives of Francois Cevert and Helmuth Koinigg in 1973 and 1974. The track held its final Grand Prix in 1980 as it struggled to pay F1’s race fees, and filed for bankruptcy the following year. Racing continued at the circuit but the last major single-seater event at the track was an IndyCar race in 2010. For a brief period, F1 had two races in America on a pair of excellent and very different circuits: the rolling road course of Watkins Glen and the tough streets of Long Beach. British promoter Chris Pook brought F1 back to California in 1976.

The track’s complicated layout underwent several revisions and at one point had its start and finishing lines in different places. But the high-speed blast alongside Shoreline Drive remained a fixture, and is still part of the configuration used for IndyCar racing today.

Pook eventually baulked at the rising cost of holding the F1 race and Bernie Ecclestone’s desire to take over rights to advertising and corporate hospitality. In 1984 the race was run for IndyCars for the first time and it remains a popular event.

A temporary circuit shoehorned into a casino car park in Las Vegas was never likely to provide an inspiring vision of Grand Prix racing. Appearing on the F1 calendar in the place formerly occupied by Watkins Glen, Las Vegas was always going to suffer by comparison and this proved a short-lived and unloved venue.

The two season-ending races at the track did have the distinction of being championship-deciders, won by Nelson Piquet and Keke Rosberg respectively, but even that failed to generate much local interest.

“This is the future of Grand Prix racing?” asked photographer Pete Lyons during the first practice session. “Looks that way,” replied journalist Nigel Roebuck. “In that case, I’ll be seeing you,” said Lyons. But it wasn’t the future. And like Riverside, the former track in Caeser’s Palace car park has been obliterated as well.

The value of racing in the “Motor City” was obvious, but the first version of Detroit’s track was very slow.

Delays in its completion meant the first race almost didn’t happen. When it did, it was a minor classic, won by John Watson from 17th on the grid.

Improvements were made to the circuit over the following years but it never found affection from some drivers, notably Alain Prost, who loathed the circuit.

There were plans to move the race to a new circuit on Belle Isle but, much the same as with Long Beach, the event switched to IndyCar in 1989. The Belle Isle race disappeared for a while but was revived this year, only to be blighted by a disintegrating track surface.

F1’s only previous visit to Texas was a disaster – one the Circuit of the Americas race organisers would do well to learn from and then put from their minds.

At least the folly of attempting to hold a race in the searing heat of the Texan summer is not being repeated. The temporary circuit had a promising layout but it melted as the mercury soared to 40C on race day and extensive repair work had to be conducted before the start.

Yet against all odds a half-decent race broke out, with Nigel Mansell, Keke Rosberg and Alain Prost vying for the lead. Just seven of the twenty-six starters were still circulating at the end, led by Rosberg, who had the sense to buy himself a water-cool skull cap before the race.

A gritty drive by Ferrari’s Rene Arnoux saw him finish second having been forced to start from the back of the grid. Mansell theatrically collapsed trying to push his Lotus across the line after its gearbox failed – he was classified sixth.

But the fate of the race was sealed when the promoter took the profits and fled. F1 never returned.

Having apparently not had enough of racing on street tracks in desert cities during the summer, F1 turned up to race in Phoenix in June 1989 on a track which looked like it had been designed using only a set square.

The race was moved earlier in the year in 1990 and Jean Alesi caused a sensation by leading the opening laps and racing Ayrton Senna hard for position. The track was re-configured for 1991, which at least cut the number of right-angled corners from ten to eight, but this Grand Prix is best remembered for failing to attract more spectators than a nearby race for ostriches.

By the end of 1991 F1’s litany of failure in America had seen six venues disappear in little more than a decade.

Circuit of the Americas

Tavo Hellmund first designed his plan for an F1 circuit on a patch of land on the outskirts of Austin, Texas in 2007 – the same year F1 held its last race in the United States.

Much has been made of the similarities part of the track have with other F1 venues past and present, such as Silverstone’s Maggotts and Becketts complex, and turn eight at Istanbul Park in Turkey. But the circuit also has character of its own with a steep climb to turn one and run-off areas painted with a suitably patriotic twist.

Hellmund was eventually forced out of the project he began and the construction of the circuit was completed by Hermann Tilke’s architecture company, who have been responsible for most recent new-build F1 circuits.

F1’s popularity in America is persistently underestimated by those outside of the country. It may never rival the NFL or NASCAR but a minority following is not a bad thing to have in a country of over three hundred million people.

McLaren team principal and FOTA president Martin Whitmarsh has long advocated bringing F1 back to America. “I’ve always maintained that Formula 1’s presence in the United States is crucial, so I’m personally pleased and satisfied that we’re finally returning to America after spending far too long away from its shores.

“On a wider level, the arrival of a state-of-the-art, purpose-build grand prix track is perfect for Formula 1, and this is a golden opportunity for the sport to finally put down roots and find a long-term home. From a business perspective, too, we are in the right place at the right time. This is an invaluable commercial opportunity for the sport, for Vodafone McLaren Mercedes and our partners.”

Time will tell if F1 has finally got the right mix of track, location and – perhaps most importantly – finance to establish a long-term future in the USA. It’s wasted too many chances in the past.

71 comments on “Circuit of the Americas: F1’s tenth home in the USA”